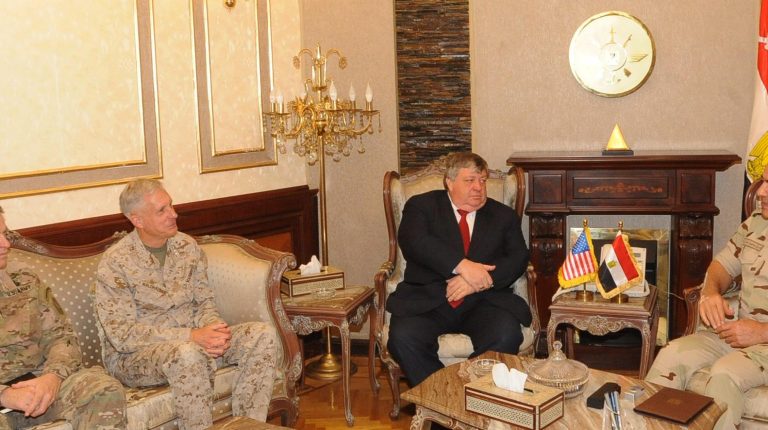 For the second time in two months, Egypt’s army chief-of-staff, General Mahmoud Hegazy, discussed on Thursday with Commander of US Africa Command Thomas Waldhauser and US Ambassador to Libya Peter Bodde the latest updates on the Libyan crisis.

According to a statement issued by military spokesperson Tamer Al-Refaei, the three military officials tackled possible ways to end the Libyan crisis and political turmoil the country has been witnessing.

The American and Egyptian military personnel also emphasized the necessity of national dialogue between the conflicting sides, as well as supporting the efforts to reach a political solution.

Al-Refaei added that Waldhauser and Bodde praised the pivotal role of Egypt to restore stability in Libya. Egypt has been an active player in the Libyan crisis.

The Libyan crisis erupted after the Libyan uprising in February 2011, which resulted in the ouster and killing of former President Muammar Al-Gaddafi in October 2011 after months of fighting between rebels and pro-Gaddafi forces. Several parties in Libya are in direct conflict now against each other and are supported by several international and regional countries.

Diplomatically, the Egyptian government has pushed for reconciliation and has hosted talks and conferences to enhance dialogue between the conflicting sides. Egypt has also showed support for the troops of Field Marshal Khalifa Haftar and has coordinated with the Libyan National Army in launching attacks on militant groups in Libya.