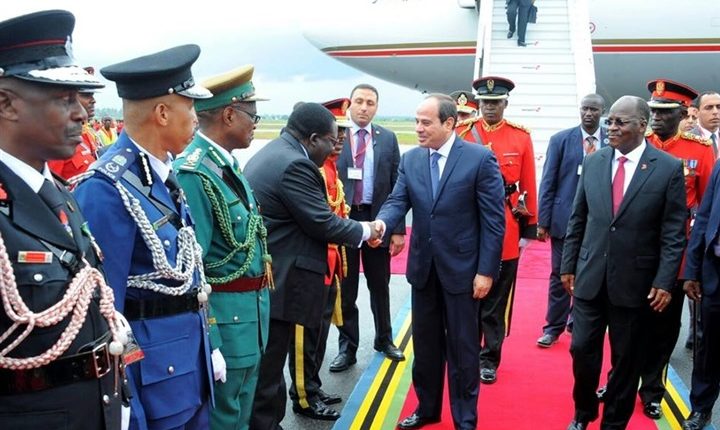 Al-Sisi is to hold bilateral discussion meetings with leaders and officials in the four countries in order to discuss bilateral cooperation, combat the challenges that the continent faces, and discuss the updates of the regional issues of common interest, especially issues related to security and peace in the continent in light of Egypt’s membership in the UN Security Council, the statement read.

One of the top issues on Al-Sisi’s agenda is the issue of the River Nile Basin and Egypt’s historic share of the Nile waters, amid diplomatic tensions between Egypt and Ethiopia after the beginning of construction of the GERD dam in April 2011. However, Egypt has expressed concerns that the dam could negatively affect Egypt’s share of the Nile.

Then-Egyptian Prime Minister Ibrahim Mahlab and the Chadian President witnessed the signing of the medical protocol, and the Chadian president expressed his hope to benefit from Egyptian expertise in all fields, especially in cultivation and establishing farms for agricultural products, as well as sending Egyptian teachers to teach in Chadian schools.

Cooperation between Egypt and Chad reached its height in December 2014, when Al-Sisi received his Chadian counterpart, Idriss Déby, in Cairo, asserting that Egypt is keen on helping to train Chadian calipers in accordance with Chad’s needs and priorities, through Al-Azhar or the Egyptian Agency of Partnership for Development (EAPD).

In February 2016, Gabonese President Ali Bongo Ondimba visited Egypt, saying that his country is interested in Egyptian investments in all fields.