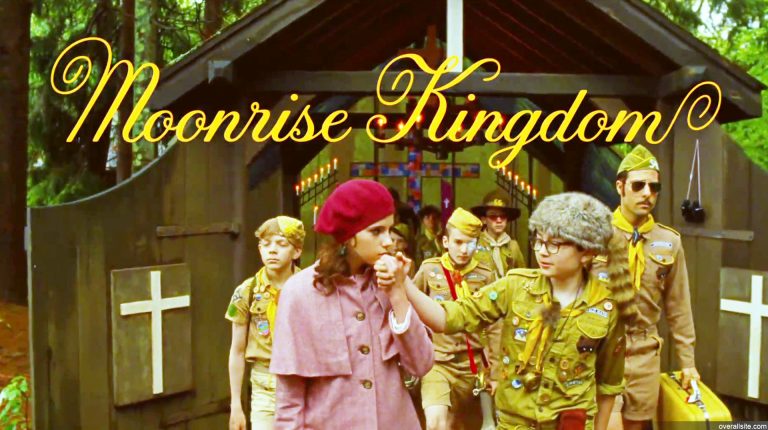 On the fictional island of New Penzance, Sam (played by Jared Gilman) and Suzy (Kara Hyward) are two troubled twelve-year olds who decide to run away together. Wes Anderson’s Moonrise Kingdom follows the pair and the troupe of adults in search of them, the entire ensemble cast in danger of an oncoming storm. The film is a story of young love, escape, and fantasy, brought to life by Anderson’s signature visual style and unique storytelling. It is enchanting, endearing, and poignant.

The most important feature of the film is its grounding in a thoroughly fantastical realm, thanks to Anderson’s signature visual dialect. His colour palettes are striking and carefully curated, each scene boasting only a few complimentary colours. His frames are tightly composed, allowing for only one focus point in a shot. His flat, perfectly symmetrical shots are prominently featured in almost every scene.

These combine with elements of the story, such as the use of a narrator/cartography teacher in a striking red jacket. He relays the layout of the island to the camera and foreshadows the oncoming storm, effectively setting a timer against which the characters must run. This all results in a storybook-feel that dominates the film. We could very easily be inside one of the fantasy novels Suzy lugs around and reads aloud from.

This, along with subtler techniques, achieves a kind of distance between viewer and film. As the camera pans around the Bishop household, we see the family members in their natural habitat, performing menial tasks or going about their normal hobbies. The camera transitions smoothly from one room to the next, turning sharply at a sudden sound. This makes of us, the viewer, a kind of spying interloper. We are not part of the story, but simply observers to it.

Anderson thus does what so many directors and authors shrink away from: he creates a work of art that does not run away from its artifice. Again and again, the film calls attention to its own fictiveness, never trying to present its reality as the viewer’s own. Jorge Luis Borges was of this same school, and he believed that this unreality was “one of art’s prerequisites.” Anderson’s made-up island of New Penzance is anachronistic, outside of our own sense of time. His symmetrical shots evoke an open story-book. He riddles the film with maps and trails, leaning into the fantasy motif.

Though Anderson creates this fantasy world perfectly, this would have only made half a movie. What makes Moonrise Kingdom so interesting is Anderson’s creation of a kind of dissonance that forces the viewer in, but keeps them at arm’s length. He does not simply show us a fantasy, but makes us care about it.

He does this by simply embracing the innocent earnestness of childhood as the perspective of the film. The love story between Sam and Suzy is not treated condescendingly, but fleshed out and given its dues as the crux of the film. The pair are both troubled children on the verge of adolescence, who run away from homes that are confusing, frustrating, and alienating. The connection between them and the salvation both find are endowed with emotional depth that the viewer cannot help rooting for.

Anderson follows this struggle between childhood and adulthood, all the while achieving a dissonance in the viewer. Close-up shots of Suzy show her turmoil, but the striking teal eyeshadow she sports (lasting through hikes, swims, and rain) remind the viewer of her otherworldly nature. A married couple speak of the pain they have caused each other, but they do so in a frame so symmetrically flat it seems painted. Anderson keeps the viewer in this tension, gripping us into a story that is still unreal and heavily stylized.

Overall, the film is a wonderful leap away from our own reality, into a world that is similar, but not quite our own. Anderson’s film consists of perfectly crafted set-pieces that fit together and set the stage for a whimsical, poignant, curated fantasy for us to experience. We enter into beautiful woods and beaches, look out from a white-and-red-storybook lighthouse, and relive all the hopes, anxieties, and charms of young love.