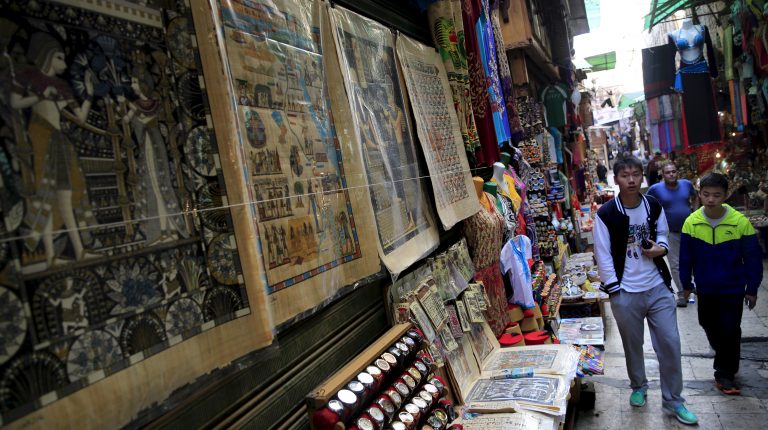 In the last decade, the Middle East and North Africa (MENA) region has been faced with economic and political turmoil. Since 2011 and the beginning of the Arab Spring, the region has encountered various challenges in terms of the economy and security, as in the case of Egypt and Tunisia, or a full-scale crisis, as in the case of Syria, Yemen, and Iraq. Even oil-producing countries in the region that have not been affected directly by the Arab Spring have suffered from the huge drop in oil prices, which took its toll on their economies.

MENA’s economy struggles as a result of the reduction witnessed in crude oil production following the agreement reached in November 2016 between OPEC and non-OPEC members, in addition to the drop in oil prices. However, booming economic activity in Iran accompanied by healthy dynamics among oil-importing countries are putting a floor underneath regional growth, according to a FocusEconomics report published in August.

FocuseEconomics’ preliminary estimate, which considers around 75% of the region’s nominal GDP, points to the fact that the MENA region’s GDP increased by 4% annually in the first quarter (Q1) of the fiscal year (FY) 2016/17, marking a decrease from the 5.1% of Q4 FY 2015/16.

The main driver behind MENA’s poor economic performance was the oil-producing countries, led by Saudi Arabia, as a result of reduced crude oil production. Qatar was the only exception due to its relatively diversified economy and its strong position as a natural gas producer. Despite a slowdown in Iran’s GDP growth in Q1, it still showed a double-digit expansion for Q3 in a row on the back of strong crude oil output. While the country is benefiting from its reintegration into the global economy, it still faces huge domestic vulnerabilities.

Although strong non-oil activities were achieved in Q2 in the region, recent data suggests that non-oil activities remained robust during that time. Volatility in the oil market, along with the ongoing oil cuts, has restrained MENA’s economic growth in the period. The report cites that not only the economic environment is uncertain, but political risks are also quickly escalating, threatening to dash any glimpse of a recovery.

Moreover, the recent dispute between Egypt, Saudi Arabia, the United Arab Emirates, Bahrain, all on one hand, and Qatar on the other due to the allegations that the latter supports terrorism, the four countries stated that before starting any negotiations, Qatar has to respond to the “13 demands” that the Saudi-led bloc issued on 23 June and stop “funding terrorism.”

Consequently, the economic outlook in the region was affected, FocusEconomics’ analysts reduced their MENA’s 2017 economic outlook for the second month in a row, and they now expect the region to witness a growth of 2.1%, which is down 0.1 percentage points from July’s estimate.

The demote witnessed in August’s MENA’s 2017 economic outlook reflects lower growth prospects for 8 of the 16 economies surveyed, including Qatar and Saudi Arabia. However, the economic outlook improved in Egypt, Israel, and Tunisia, while projections were left stable in Iran, Jordan, Lebanon, the United Arab Emirates, and Yemen.

The report forecasted Iran to be the best performer of the year followed by Morocco. At the other end of the spectrum, Gulf Cooperation Council (GCC) countries are expected to perform poorly, with Kuwait and Saudi Arabia both contracting in 2017. Of the rest of the major economies in the region, Egypt will likely grow the fastest, followed closely by Israel.

The authorities’ ambitious economic reform programme was once again vindicated mid-July, after the International Monetary Fund (IMF) formally released the second tranche of the $12bn loan, worth $1.25 bn. In its first review of the Extended Fund Facility (EFF), the fund gave a fairly ringing endorsement, lauding the progress on the reform agenda, with new investment and industrial licensing laws recently approved and a new insolvency law currently in parliament.

Nevertheless, consumers could be forgiven for not sharing the IMF’s enthusiasm, as they feel squeezed by the recent fuel and electricity subsidy cuts, which will incite further price increases in the short-term. However, the authorities plan to phase out energy subsidies more gradually. Applying a social safety net package, announced by the government in June, might act as some sort of comfort.

The report forecasted that GDP growth will accelerate in FY 2018, as a result of investment growth due to the implementation of laws designed to improve the business environment. In regards to inflation, FocusEconomics analysts believe that slowly declining inflation should boost consumers’ purchasing power, which, in turn, would increase private consumption. Analysts expect GDP to have expanded 3.5% in FY 2017, and forecast growth of 4.0% in FY 2018.

Headline inflation was increased by 3.3% in June to register 33%. Despite that fact that the Central Bank of Egypt (CBE) in its 6 July meeting hiked the overnight deposit rate from 16.75% to 18.75% in a bid to curb inflation. The report expects inflation to average 24.5% in calendar year 2017 and see it declining significantly to 14.9% at the end of calendar year 2018.

Regarding the real economy, Egypt’s PMI was largely unchanged in June, which signals a continuing deterioration in business conditions. The Emirates NBD Egypt Purchasing Managers’ Index (PMI) inched down from 47.3 in May to 47.2 in June. The index maintained its position below the 50-point threshold that separates contraction from expansion in the non-oil producing private sector. The report indicates that this is a sign that, although the economy looks to be slowly gaining pace, Egyptian firms are still struggling and are being squeezed by weak domestic demand and soaring input costs.

Moreover, June’s relatively flat reading was the result of the continued decline in output and new orders, although the latter decreased at the slowest pace in ten months. Encouragingly, export orders grew for the third month in succession, as firms reap the rewards of a markedly weaker pound. However, the flipside of the currency depreciation was a continued strong increase in input costs, which were, once again, passed onto clients in the form of higher output prices.

Consequently, in response to lower economic activity, firms continued to cut jobs, albeit at a fairly modest rate. Despite currently challenging conditions, firms remain optimistic regarding business prospects for the coming year, which bodes well for the PMI in the months ahead.

“While the Egyptian economy remains under pressure, there are further signs of stabilisation as export orders rose for the third straight month in June and selling price inflation eased slightly. However, firms continued to cite weak domestic demand conditions as weighing on activity and new order growth,” said Khatija Haque, head of MENA Research at Emirates NBD. 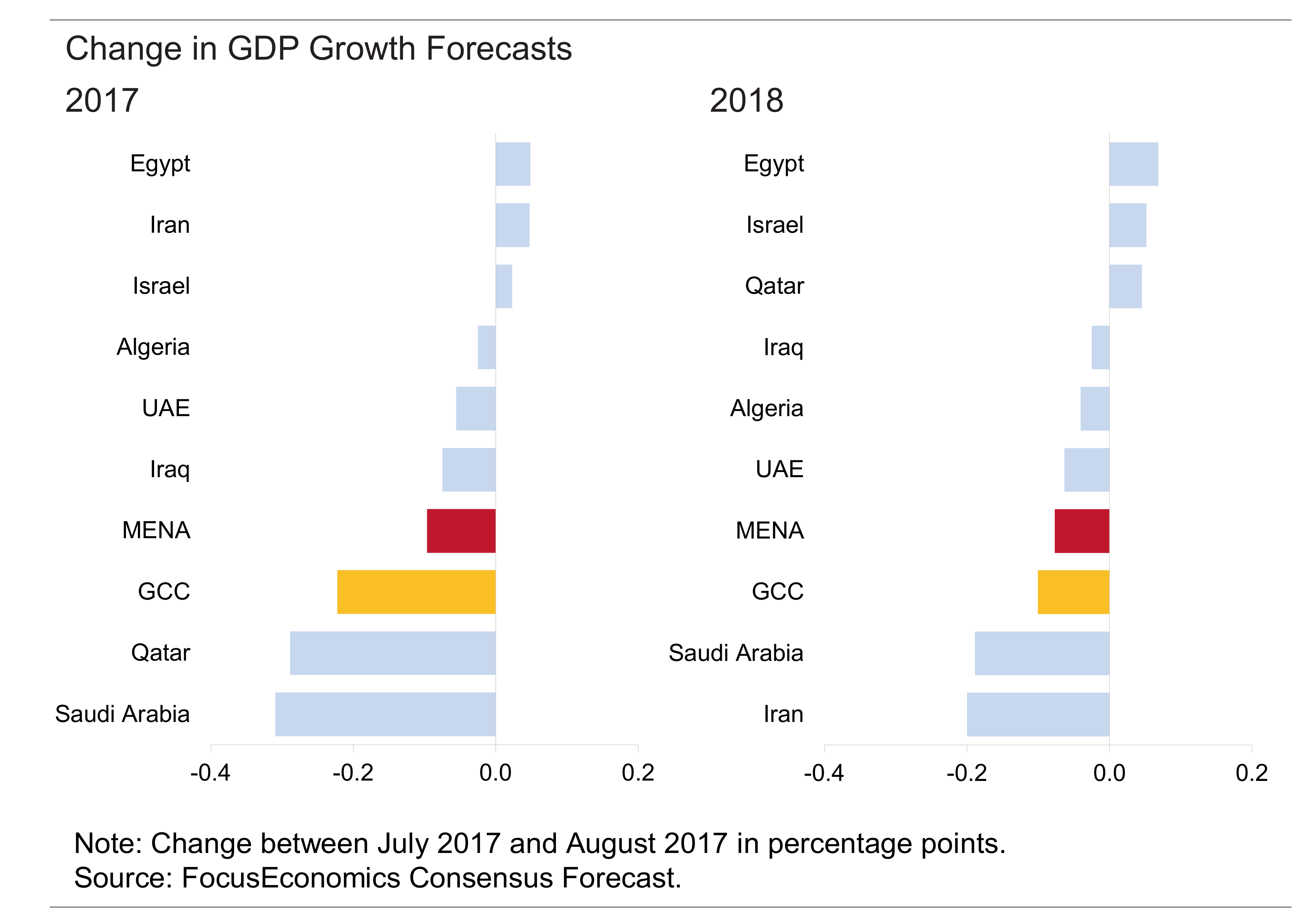 Regarding Egypt’s monetary and fiscal sector, the CBE continues to aggressively hike rates across the board for the second consecutive meeting, in an attempt to keep a lid on prices, which have soared since the CBE’s decision to free float the Egyptian pound in November 2016.

However, the CBE’s move comes as headline inflation remains painfully high registering at 33% in July, despite dipping slightly in May for the first time since October. Although underlying inflationary pressures have eased in recent months as the effects of the currency depreciation and recent subsidy cuts work their way out of the system, they are still too high for the bank’s liking.

The report indicates that this is in significant part due to insufficiently well-anchored inflation expectations, following several years of elevated price increases, as well as the effect of the energy subsidy cuts and the increase in VAT to 14%, which took place in July and which have the potential to fan the flames of inflation further in the short term.

Nevertheless, on the demand side of the equation, the economy looks to be slowly on the mend, with growth in Q1 revised up to 4.3%, while industrial production has rebounded so far this year. By raising interest rates, the CBE aims to head off potentially higher cost-push and demand-pull price pressures in the months ahead and set the headline inflation rate on a firm downward path, the report indicates.

In its communiqué, the CBE restated its goal, introduced at the previous meeting in a bid to anchor expectations: reduce headline inflation to 10-16% by Q4 2018 and single-digit figures thereafter. FocusEconomics panelists believe that the CBE is likely to meet its objective, despite structural reforms which will put upward pressure on inflation in the short term.

Due to the magnitude of the supply-side shock the economy is currently undergoing, and in order to avoid stamping out an incipient economic recovery, the CBE is prepared to tolerate high inflation for an extended period of time going forward. In contrast to the previous month, the bank gave a clear indication that it is likely to loosen the monetary policy somewhat going forward as soon as underlying inflation moderates—although, given recent structural reforms, this may not occur in the near future.

“We think this [monetary easing] is unlikely in the near term, particularly given the further VAT hike to 14% from 1 July and energy price hikes. In particular, FocusEconomics panelists will be looking for details of the success of the CBE’s overnight and seven-day deposit auctions in absorbing excess domestic liquidity and on foreign currency inflows in the aftermath of the latest hike,” according to Bilal Khan, senior economist at Standard Chartered Bank.

The report forecast that the overnight deposit rate to register at 17.75% by the end of calendar year 2017, 14.05% in calendar year 2018. However, with some FocusEconomics panelists still factoring in the CBE’s latest decision, such forecasts may well be revised upwards in the coming months.