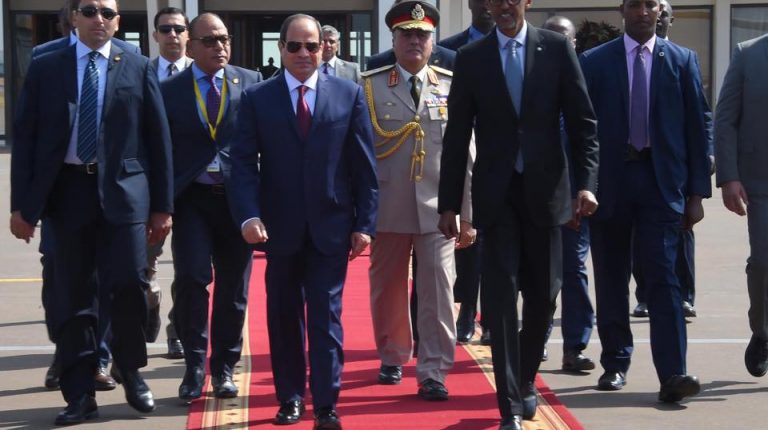 The visit is supposed to include negotiations and discussions on boosting the Egyptian-Gabonese bilateral relations and issues of common interest, in light of Egypt’s membership in the UN Security Council and the African Peace and Security Council.

The visit is the first that an Egyptian president visits Gabon, while the first Gabonese president to visit Egypt was President Omar Bongo in 1973, two years before announcing the diplomatic ties between the two countries in 1975.

On Tuesday, President Al-Sisi held a meeting with Rwandan President Paul Kagame at the Rwandan capital city Kigali. The two counterparts discussed boosting bilateral relations and achieving economic and developmental integration between Nile Basin countries, according to the presidency statement.

Al-Sisi asserted that the Nile Basin Summit, which was held recently in Entebbe, forms the beginning of an effective dialogue between the leaders of the Nile Basin countries to achieve the common interest of these countries, and Egypt supports the efforts of the other Nile Basin countries for development without harming Egypt’s interests, which depend basically on the Nile River for water, the statement read.

The Rwandan president stressed the common responsibility of all Nile Basin countries to preserve the Nile waters, which millions of people depend on as a main source for life.

Presidency spokesperson Alaa Youssef said that the meeting included discussions on regional issues, including the reformation of the African Union, and Al-Sisi asserted Egypt’s support for the institutional reformation efforts of the union in light of the responsibility of Kagame for the reformation topic. Also, the two sides agreed to continue discussions and meetings on the African level about this topic to boost the process of reformation.

The meetings also discussed confronting terrorism and extremism, pointing out the important role of Al-Azhar as a moderate institute in spreading the right Islamic teachings.

Al-Sisi praised the achievements of Rwanda in the last years, which boosted stability and achieved economic growth. He also expressed Egypt’s keenness on boosting cooperation between the two countries in all fields, especially communication and developing infrastructure, in addition to trade exchange, agriculture, power, and tourism.

Al-Sisi invited his Rwandan counterpart to visit Egypt to participate in the International Conference for Youth and Africa 2017 forum, which is set to be held in November and December. The invitation was welcomed by Kagame.

Al-Sisi also visited the memorial of the victims of the genocide in Rwanda and the museum which documents the genocide that happened in the 1990s, according to a statement from the presidency.

In July 2016, the president visited Rwanda for the first time during his presidency, to attend the African Summit. Egypt also received several Rwandan ministers to attend regional and bilateral meetings.