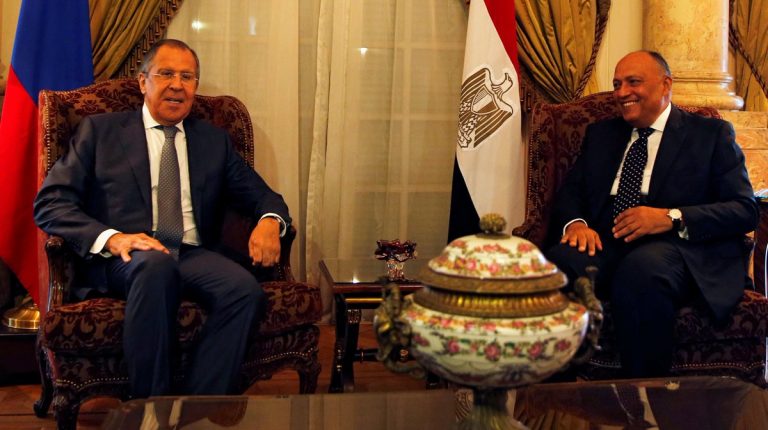 Egypt’s Foreign Minister Sameh Shoukry headed Sunday to Moscow on a diplomatic tour includes Russia, Estonia, and Lithuania, to boost the bilateral relations and discuss the latest regional and international issues, in addition to promoting the candidacy of Mushira Khattab to head the UNESCO.

In press statements, Abu Zaid said that Shoukry’s visit to Russia comes in the context of boosting the strategic relationship between Egypt and Russia, represented in the strategic consultations agreement 2×2 which includes ministries of foreign affairs and defence in the two countries.

Russia signs this agreement with only six countries, including Egypt.

On 29 May, Shoukry held an extensive consultation session with Lavrov, during an Egyptian-Russian summit, in Cairo. Egypt is considered the only Arab country in the Russian agreement, and the relations between Egypt and Russia and the depth of their partnership in various fields are special.

On 30 May, President Abdel Fattah Al-Sisi received Russian minister of foreign affairs Sergey Lavrov and minister of defence Sergei Shoygu in the presence of Egypt’s Minister of Defence Sedki Sobhi and Minister of Foreign Affairs Sameh Shoukry. The meeting touched on bilateral relations and President Al-Sisi asserted Egypt’s keenness on deepening the cooperation with Russia in economic, commercial, and industrial fields.

According to Abu Zaid, Shoukry is set to head to Estonia on Tuesday to hold discussions with the Estonian prime minister, minister of foreign affairs, and chief of foreign affairs committee in the Estonian parliament.
Egypt and Russia hold the same point of view on several regional and international issues, such as the Syrian crisis; however, Russia has stopped flights from Moscow to Egypt after the crash of a Russian plane in Sinai in October 2016. There have been several narrations made by the Russian side about the resurrection of their flights to Egypt, but nothing official yet.

Nearly five Russian delegations paid visits to Egypt in 2016 for the sake of inspecting security measures followed in airports; the first was in July, followed by two visits in August, and another in September. In December, Russian transportation minister Maxim Sokolov also visited Egypt.

In December 2016, Russian president Vladimir Putin told Egypt’s President Abdel Fattah Al-Sisi that direct flights between Moscow and Cairo would resume soon. The Russian side has promised the resumption of direct flights several times over the past few months, without setting a specific date.