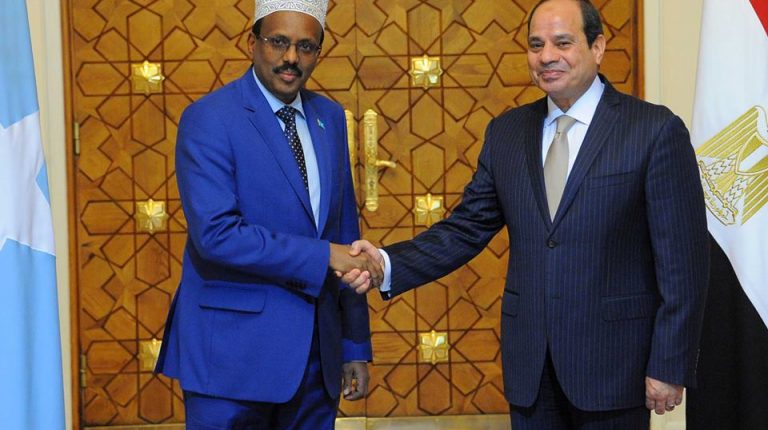 President Abdel Fattah Al-Sisi praised Sunday the unique historical relations between Egypt and Somalia, offering all support for Somalia in the next phase to build the state’s institutions, especially the national army, according to a presidency statement.

During his meeting with the Somali President Mohamed Abdullahi “Farmajo” Mohamed in Cairo, Al-Sisi stressed Egypt’s support for Somalia in building Somalis’ abilities in all developmental fields by the training courses and programmes organised by the Egyptian Agency of Partnership for Development [EAPD]—in addition to increasing the number of Egyptian scholarships for the Somali students.

The presidency spokesperson Alaa Youssef said that the two leaders discussed boosting the bilateral relations in presence of the concerned ministers in the two sides. Farmajo briefed Al-Sisi on the latest updates in the Somalia affair and efforts exerted by the central government to restore security and stability and to overcome the challenges, which terrorism is on its top.

Al-Sisi expressed Egypt’s keenness on cooperating with Somalia in the economic and commercial levels, pointing out to following the results of several Egyptian ministries in Somalia.

The Somali president welcomed activating cooperation between the two countries in all fields and working on boosting the economic and commercial relations between his country and Egypt. He also thanked Egypt for supporting Somalia in several fields and for defending the nation’s interests in regional and international forums, the statement read.

Al-Sisi asserted Egypt’s support for Federal Somalia and said that Egypt’s foreign policy based on not intervening in the internal affairs of other countries.