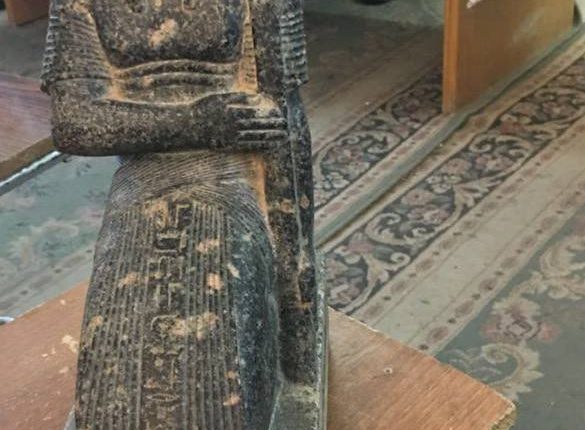 Ministry of Antiquities announced spoiling an attempt of selling a rare ancient statue dates back to the Late Period at Assiut. The announcement was stated at the Ministry’s official Facebook page revealing that the rare granite statue was found at the suspect’s house alongside drugs and several weapons.

The statue was found when the suspect was digging beneath one of the residential houses in the area, and according to his confessions which the statement reads, he was planning to sell it.

The statue was declared “a rare ancient masterpiece” after it was examined by a mission of archaeologists from the ministry.

The 37cm height statue features one of the well-known priests in worshipping position, while he’s kneeling and holding a stick in one of his hands while he places the other over his body.

The statues’ back was curved with some hieroglyphic words, which archaeologist identified as the names of the priest, who was one of Amon’s religious men.

This comes few days after another smuggling attempt was spoiled by Hurghada authorities which prevented six ancient statues date back to 18th century to from being smuggled outside the country.

Ahmed Al-Rawi Head of the Central Administration of Seized Antiquities Units at the Ministry of Antiquities explained in a press release that the seized artefacts were in the possession of an Arab state citizen and it includes of a cane with a handle carved in stone.

One of the detected relics was a hand stick with the face of a Jewish man wearing a kippah (Jewish male’s head cover) with a long beard curved on its top. This is along five stone reliefs engraved with texts written in Hebrew and other decorative elements and a book of 29 papers written in Hebrew.

Ministry’s early study indicates that the seized relics could be the commandments of Judas Iscariot who is believed to be one of the Twelve original disciples of Jesus Christ.