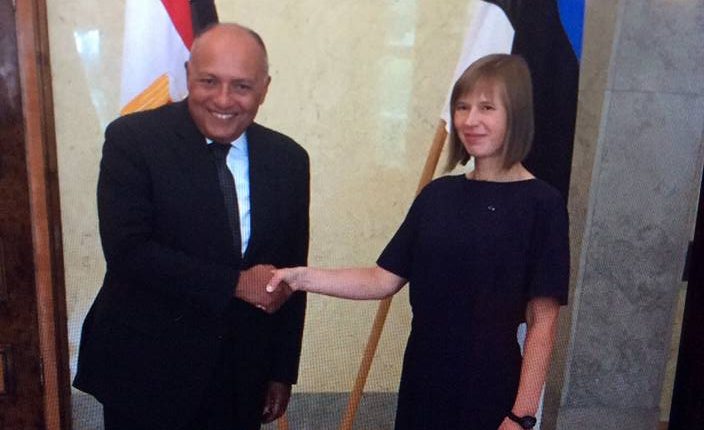 Egypt’s Minister of Foreign Affairs Sameh Shoukry met Tuesday with the President of the Republic of Estonia Kersti Kaljulaid in the Estonian capital city Tallinn, and handed her over a letter from President Abdel Fattah Al-Sisi, the Ministry of Foreign Affairs spokesperson Ahmed Abu Zaid said in a statement.

The letter includes ways of boosting the bilateral relations between Egypt and Estonia, and the necessity of coordination between the two countries in international forums and in the European Union [EU]. According to the statement, Kaljulaid expressed her appreciation for the Egyptian pivotally role in boosting security and stability in the Middle East in contrast to the phenomena of terrorism.

Abu Zaid pointed out that the importance of the visit comes as Estonia is the president of the EU in the current round, and is a member in the executive council of the United Nations Educational, Scientific and Cultural Organization (UNESCO), in addition to Egypt’s keenness on developing its relations with the Baltic states which includes beside Estonia, Latvia and Lithuania.

Egypt is looking forward to build on the results of the results of the EU-Egypt Association Council 7th session in Brussels in late July. The session confirmed the broader engagement of the EU-Egypt relations based on the resumption of the bilateral Association Agreement structure in 2015 and on the joint priorities identified considering the revised European Neighbourhood Policy (ENP) as well as the “Sustainable Development Strategy: Egypt Vision 2030”, which will guide the dialogue and cooperation for the next three years.

The ministry spokesperson said that Shoukry held intensive meetings with the Estonian Minister of Foreign Affairs Sven Mikser and the head of the Committee of Foreign Affairs in the Estonian Parliament to discuss boosting cooperation on the bilateral level. He also stressed Egypt’s trust on Estonia’s leadership to the EU in the status quo which witnesses unprecedented challenges in all levels.

The meetings discussed several issues of common interest such as immigration, international security and confronting terrorism. Also, the candidacy of Moushira Khattab to head the UNESCO was discussed, and Shoukry pointed out that it is the time for an Arab person to take the position as an application of the fair alternation.