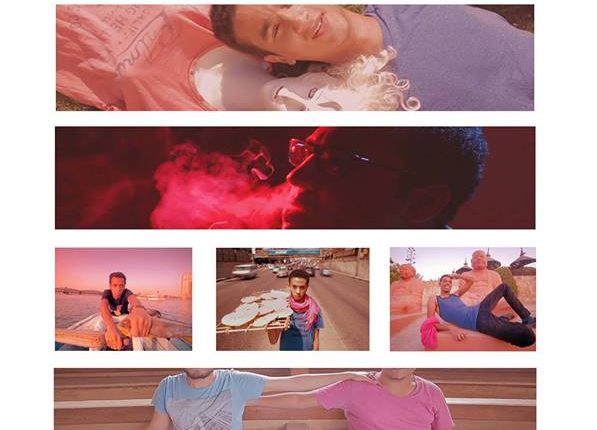 People are deep oceans that are full of hidden stories; sailing these strong waves seeking to bring those stories out is Khaled Khella’s biggest passion as a director. Videotaping the suffering stories of random people who belong to middle class and tell the stories captivated behind their calm looks and peaceful appearance was his main goal while directing his last short film “Egyptian Misery”.

Egyptian Misery is a five-minute film that portrays Egyptian male sufferings in the community. With 8 different characters, each fight a different battle, these young men present the everyday people, one meets at public transportations or even deals with them on daily basis without noticing their submarine volcanos.

Khella is a 25-year-old director, who has been in the field of film making for 8 years. With several small works, his main goal is to present the bare truth of Egyptian society in all its shocking forms including the daily used vocab which are unfamiliarly used on camera.

“Based on True stories” is the introduction scene of the film. During the scenes of his work, Khella voices the depression of his generation with the stories he had personally lived within his living circle.

“These characters are all the truth of what our generation is going through” Khlella told Daily News Egypt “there was not a one of them that I haven’t personally met in my life”.

Throughout the film’s few minutes, viewers get to listen to the inner voices of mid-twenties men, while they speak about their sexual oppression, lack of jobs availability, seeking love and unbearable life conditions.

“I wasn’t really planning to write a film of only men’s suffering in the Egyptian community, I just had several stories written down about many characters that I thought combining them in one final short film will end up good. With the overwhelming feelings of writing I never really noticed anything. Then, I surprisingly found out that the film is about men!” Khella said.

One of the characters screened in film, is a young man who looks like the man next door. He is captured sitting at the top of a hill with a mannequin, while he smilingly says that gays’ lives in Egypt is simple and easy.

“A man can sleep at his friend’s house and have sex without looking suspicious. Even if they are sitting together in a street, no one will notice anything.  However, we [straight people] have no place in this country, and we struggle for just one kiss!” he calmly says.

Another scene shows an overweight man leaning his back on a wall beside sprayed words that read “I’m Karim and I wish I could talk to a girl” with his phone number written. Just a few seconds of silence are followed with him saying “I pray you all die!”.

The characters leave audience with many scenarios in their heads of what could had happened to each of them in order to reach the point of saying words that are opposite their true feelings or the truth.

“That is something that I purposely did in the film” Khella stated “because I wanted each viewer to think the amount of injustice these persons went through, which are eventually what we in real life experience as well”.

The film was shot in 4 days, with only EGP 2000 budget. As for the stars, they were all young unknown actors who applied through an audition Khella announced with the help of a famous local Facebook page holds the same name of the film, “Egyptian misery”.

The page is a social platform where people send their confessions of seek help anonymously. Three out of the screened characters, were originally the stories of men who sent anonymous problems to the page, and Khella read them.

“I believe that the one common thing about all these different stories, is that people can personally connect to each and every one of them. They are all so real that one can’t help but finding himself of one that he knows in them.” Khella commented.

The film got wide acceptance over the social media exceeding all expectations, “I was expecting people to feel uncomfortable towards the used language of the film, however, I was surprised with thousands of likes and shares, and over 25.000 views in the first couple of days!” he smilingly added.

After the warm acceptance people had towards the film, the crew is currently considering having another similar film about women oppression and struggles in the society.

Two drinks away from schizophrenia: ‘Axolotl Overkill’ shows what it’s like to be young in Berlin