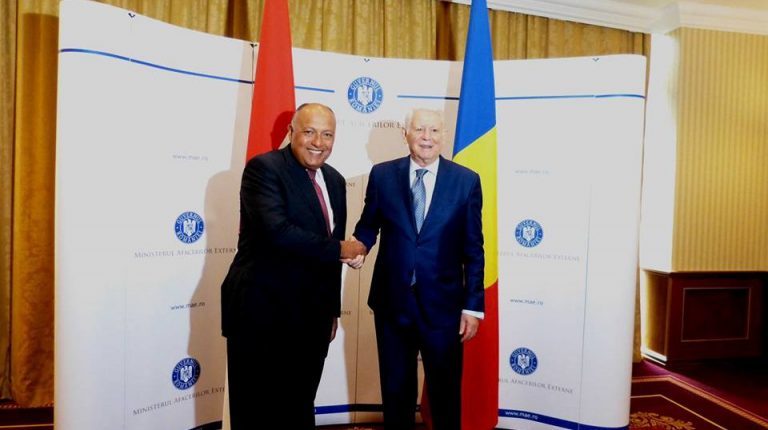 Minister of Foreign Affairs Sameh Shoukry said Tuesday that Qatar needed to display commitment to stop advocating and supporting terrorism by accepting the list of 13 demands previously sent by the boycotting states of Saudi Arabia, the UAE, Bahrain, and Egypt.

Shoukry spoke at the Annual Meeting of Romanian Diplomacy as he was in Bucharest for meetings with officials.

Shoukry said that Qatar’s efforts to destablise Arab countries were well documented. “We are not asking for a regime change or military intervention,” he said, adding that the latest boycotting procedures come after repeated means to attract their attention through diplomatic channels.

The minister accused Qatar of responsibility towards the killing of thousands of security forces in Sinai who are fighting extremist organisations and also incidents that targeted Egyptian Christians.

Bombings of three churches in Cairo, Tanta, and Alexandria, killing dozens had been claimed by the Islamic State group (IS).

Shoukry asserted rejection for the “harbouring of terrorist associates in Doha” and the general financial support they received, allegedly with the help of “another state of the region that has associations to the NATO and security agents in Europe,” he said.

Egypt has long accused Turkey of similar accusations to Qatar, especially in light of both countries’ hosting of Islamist figures inciting violent opposition against the Egyptian government.

The minister’s visit to Romania is the last in a three-day tour, where he went to Germany and Belarus and repeatedly asserted the current stance against Qatar’s actions.

Shoukry said if Qatar is willing to refute its support of terrorism, Egypt will be ready to deal with “a state that caused the widowing and loss of many Egyptian lives over the past six years.”

Meanwhile, Egypt and Romania signed Tuesday a memorandum of understanding (MoU) on visa exemptions for diplomats. This came during Shoukry’s visit to Bucharest, as the two countries celebrate 110 years of diplomatic relations.

According to a statement from the ministry, Shoukry met with his Romanian counterpart Teodor Melescanu, signing two other agreements, one on political advice exchange and one between the two countries’ ministries of tourism.