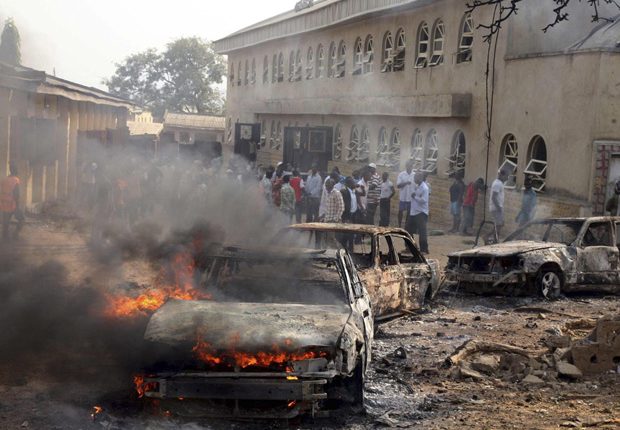 The Institute for Economics and Peace (IEP) has published its 11th edition of “The Global Peace Index (GPI)”, which ranks 163 independent states and independent territories on their level of peacefulness. The GPI is considered the world’s leading measure of global peacefulness. In 2017’s, the global level of peace improved by 0.28%, where 93 countries have improved their status, while 68 countries deteriorated.

In the 2017 edition of the index, Iceland maintained its position as the most peaceful country in the world, a position it has held since 2008. It is followed by New Zealand, Portugal, Austria, and Denmark, all of which were ranked highly in last year’s GPI. On the other hand, very little change was witnessed at the bottom of the index. Syria remains the least peaceful country in the world, preceded by Afghanistan, Iraq, South Sudan, and Yemen. Egypt ranked 139, moving three places up from 2016. 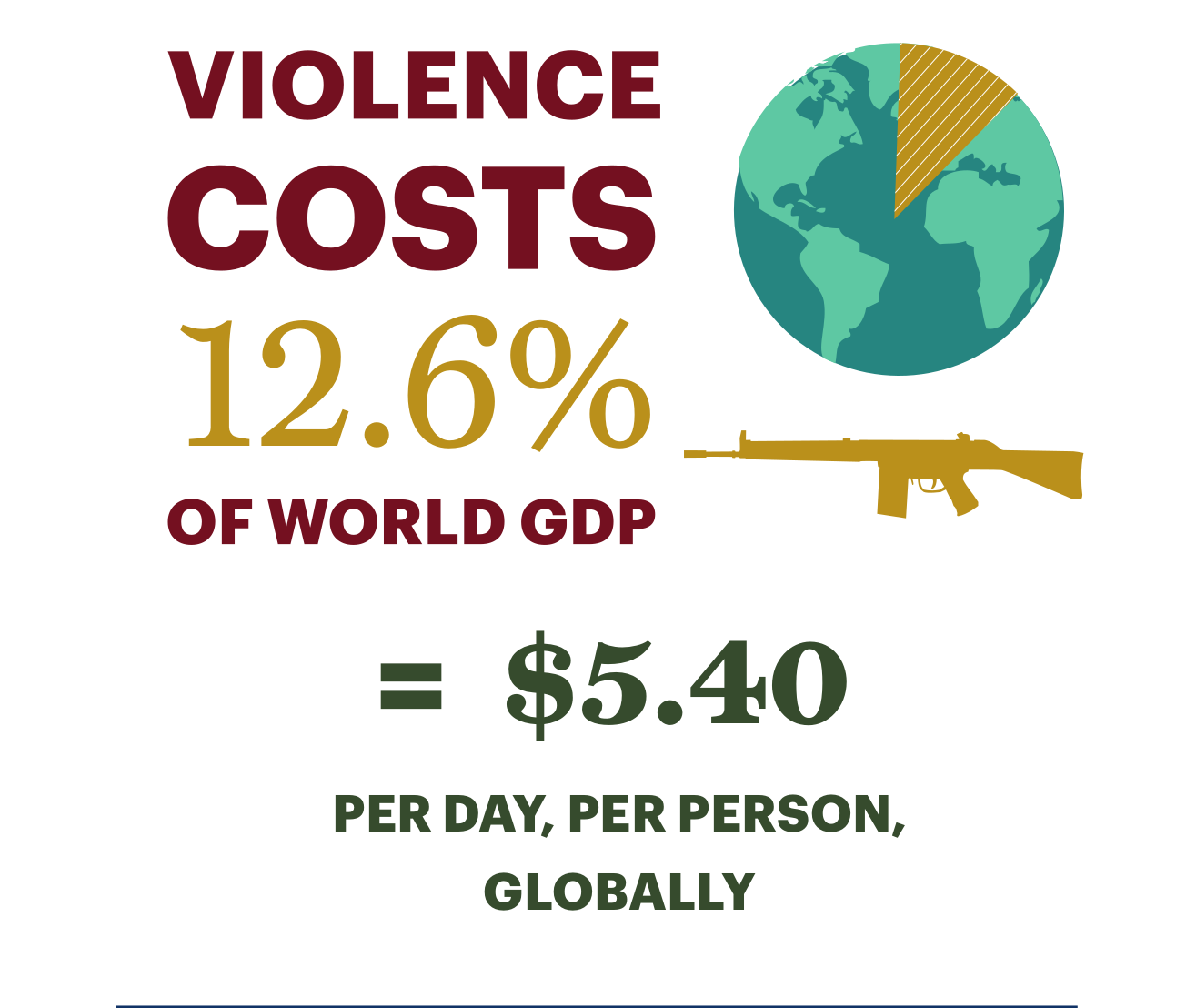 According to the report, six out of the world’s nine regions witnessed improvement. The largest improvement was registered in South America, overtaking Central America and the Caribbean as the fourth most peaceful region. South America’s score came as a result of the progress witnessed across all three measured domains, with particularly strong gains in societal safety and security.

However, the largest regional deterioration took place in North America, followed by sub-Saharan Africa and the Middle East and North Africa (MENA) regions. North America score deteriorated entirely because of the deterioration witnessed in the United States score, which more than offset a mild improvement in Canada’s. The score of the US has been dragged down largely because of the decrease in two indicators: level of perceived criminality in society and the intensity of the organised internal conflict. The latter measure has deteriorated because of the increased levels of political polarisation within the US political system. The US also has experienced the fourth largest drop in Positive Peace globally, after Syria, Greece, and Hungary in the ten years to 2015.

On the other hand, Europe remains the most peaceful region in the world, with eight of the ten most peaceful countries coming from this region. However, though 23 of the 36 countries improved, the average peace score did not change notably because of the substantial decline witnessed in Turkey, the impact of the terrorist attacks in Brussels, Nice, and Paris, as well as deteriorating relations between Russia and its Nordic neighbours.

With regards to the MENA region, it maintained its status as the least peaceful region in the world for the fifth successive year, where Saudi Arabia, followed by Libya, recorded the largest drops in peace index in the region. Saudi Arabia fell because of its involvement in the Syrian and Yemeni conflicts and of the increased terrorist activity, mainly conducted by the Islamic State (IS) and its affiliates, while the fall for Libya was the result of its increased level of internal conflict.

According to the report, the economic impact of violence on the global economy in 2016 registered at about $14.3tr in purchasing power parity (PPP) terms. This figure is equivalent to 12.6 % of the world’s economic activity (gross world product), or $1,953 per capita, which marks a 3% decrease compared to 2015.

One of the main drivers behind the reduction witnessed was the decline in the number of people killed by terrorism, which dropped 10%, in addition to the reduction in expenditure on peacekeeping, lower internal security, military spending and lower costs from homicide. This is the first drop since 2011, the year that marked the start of the Syrian Civil War and the start of the IS’ territorial gains in Iraq.

Moreover, the report indicates that the economic impact of war was $1.04tr. Peace building expenditure was estimated at around $10bn, or less than 1% of the cost of war. The report also estimates the likely return on increases in peace building funding, noting that the return on investment can be up to 16 times the cost of the intervention. This is especially important for countries mired in conflict where the average economic impact of violence for the 10 least peaceful countries was equivalent to 37% of their GDP. This compares to only 3% in the 10 most peaceful countries.

Global military expenditure was highlighted as the single largest component at $5.6tr PPP, or 39% of the economic impact of violence in 2016. IEP’s measure of military expenditure also includes the cost of veteran affairs and interest payments on militarily related debt in the United States, which was $233bn in 2016.

Furthermore, the countries that displayed the most significant growth in heavy weapons capabilities over the last 30 years are primarily in unstable regions where there are high tensions with neighbouring countries. These include India, Syria, Egypt, South Korea, Iran, and Pakistan.

The South Korean heavy weapons score increased the most, by 20,746, from 23,520 to 44,266. This increase was motivated by continued rising tensions with North Korea. South Korea was closely followed by Egypt, whose score increased by 18,695 because of the ongoing terrorism threats and instability in the region, and India, which increased by 14,982. 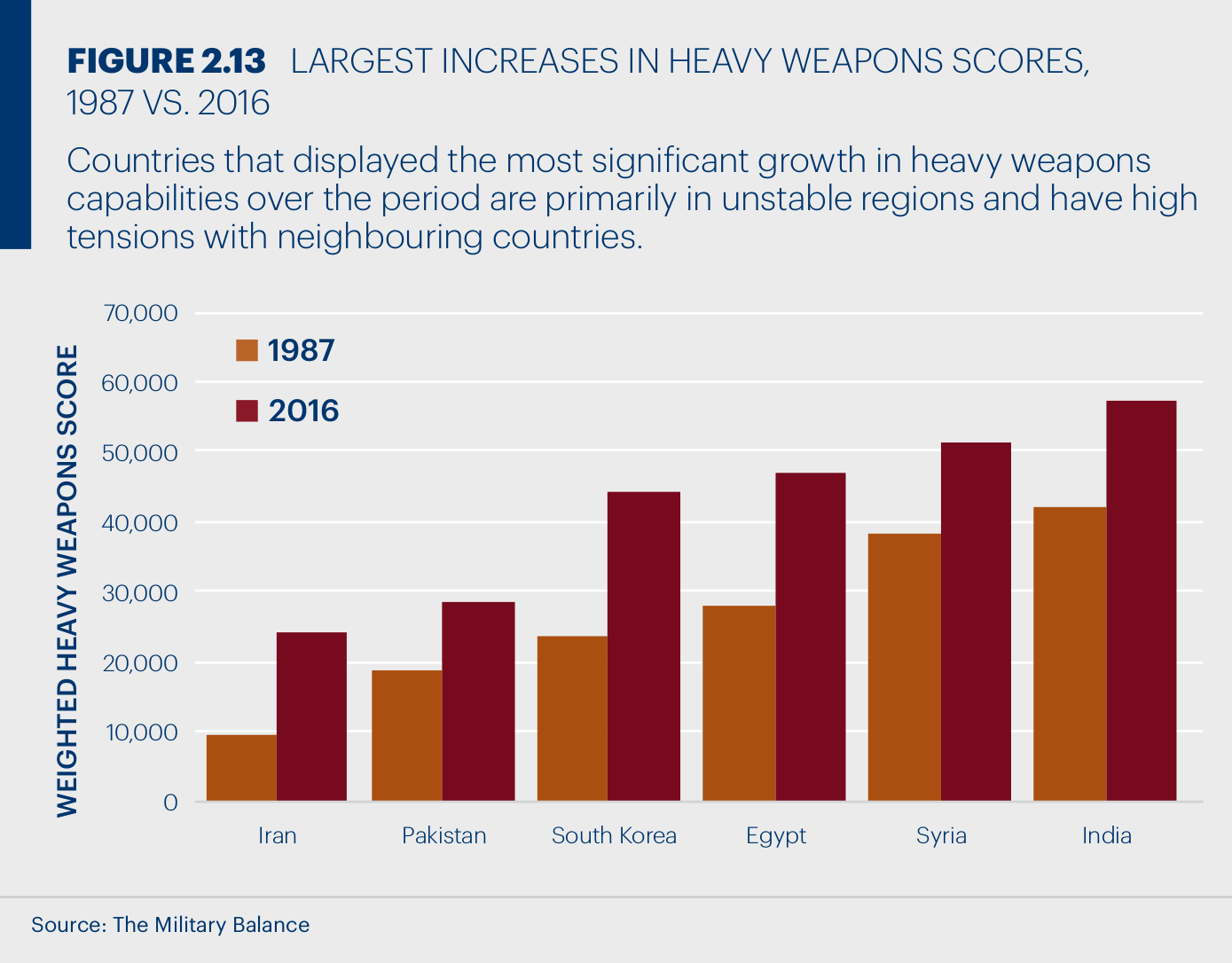 While homicide, at 14%, was the third most costly component of the model with the economic impact associated with intentional homicide being greater than the combined total for all violent crime and conflict.

The report indicates that the greatest variation witnessed between regions is violent crime and homicides, which represent 55% of the economic impact on South America, but only 11% on the MENA region and North America. This is followed by the military, which registered at 54% in North America and only 12% in Central America and the Caribbean.

On average, countries in sub-Saharan Africa spend ten times less on violence containment than Europe and five times less when compared to the Asia-Pacific region. 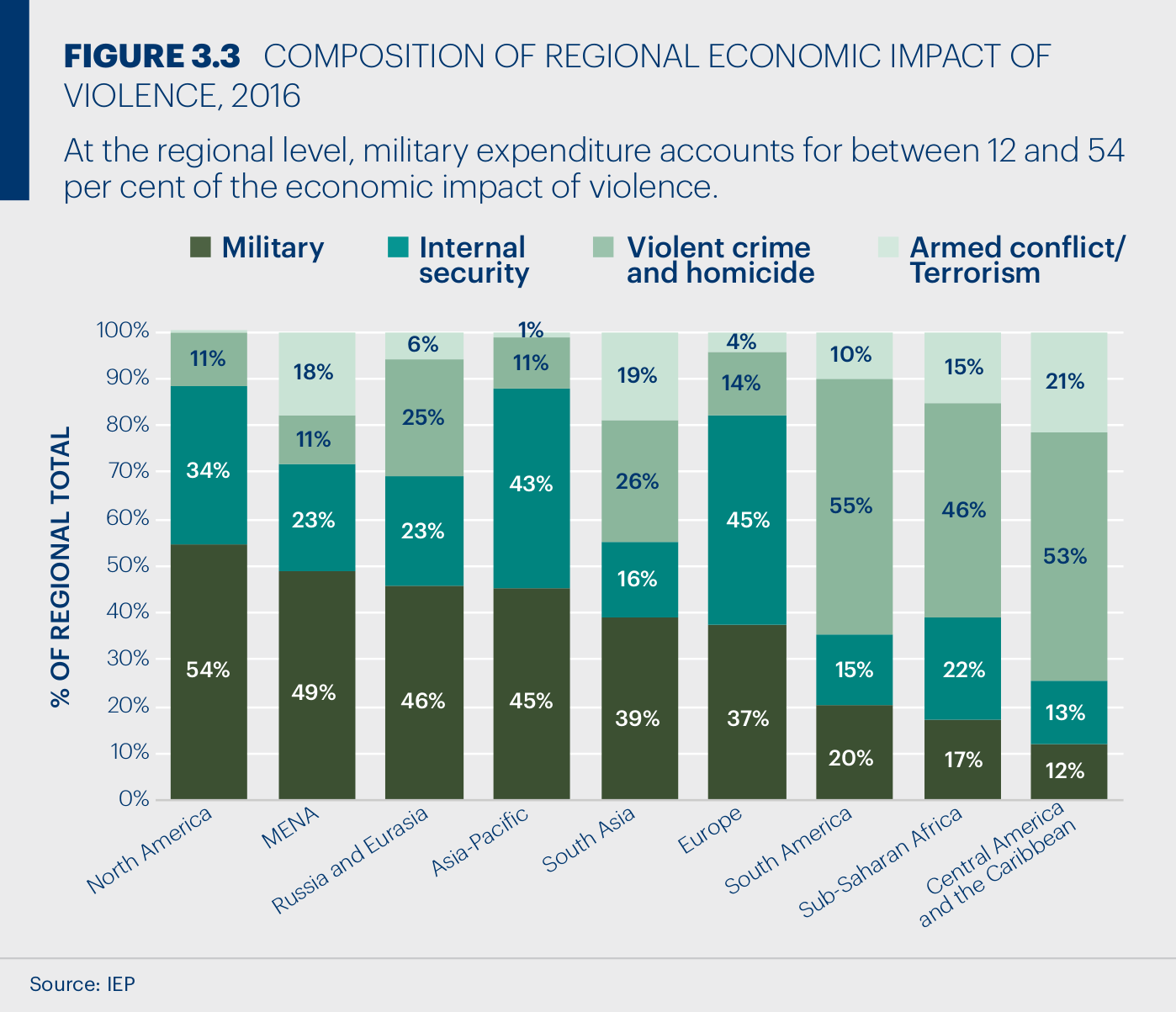 Regarding armed conflicts, the report indicates that it affects economic activity through various channels depending on the scale and intensity of the conflict. Large-scale conflicts, such as the Syrian Civil War or the Iraqi insurgency, have substantial costs, leading to a high number of deaths, severe population displacement, and substantial property and infrastructure destruction. Violence also imposes other costs such as increased security-related spending, delaying planned investment, and capital flight.

Additionally, there are indirect costs of violence exemplified by the collapse of government services and the erosion of formal and informal institutions.

The report states that unless completely resolved through a comprehensive long-term post-conflict peace building and development, conflict and weak economic performance can create a vicious circle that is hard to break. This is epitomised by how “sticky” the ten least peaceful countries are on the GPI and how difficult it is for them to become more peaceful.

Low GDP growth, inequality, lack of economic opportunity and unemployment, severe corruption, and price shocks are considered a catalyst that contributes to the cycle of conflict and underdevelopment.

The global cost of conflict was estimated at $1.04tr in 2016. Conflict costs consist of deaths from conflict, terrorism, GDP losses from conflict, and IDPs and refugees, but it does not include internal security expenditure, incarceration, and other internal costs.