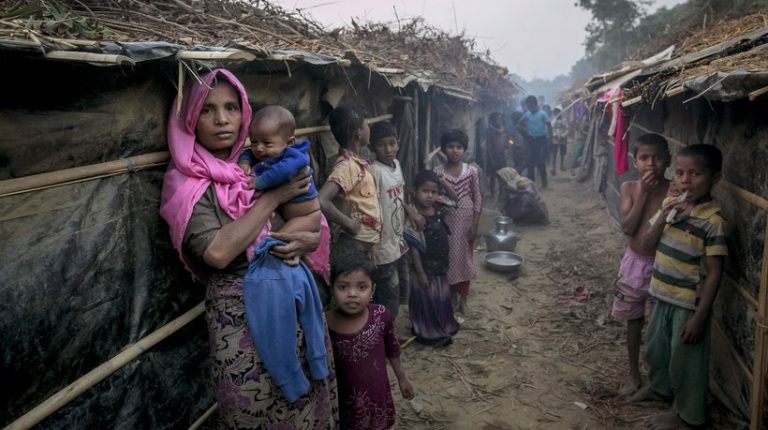 President Abdel Fattah Al-Sisi and his Russian counterpart Vladimir Putin condemned the last violent actions towards the Rohingya Muslim minority in Myanmar, during a meeting of the two leaders aside of the BRICS summit in China on Monday.

Al-Sisi and Putin called on the Myanmar government to take measures to halt violence, which, if continued, would cause more tensions and terrorism.

Hundreds of Rohingya Muslims in Myanmar have been killed and more than 2,600 houses have been burned in the last week, after a military operation of the Myanmar army over the Rakhine state in the majority Buddhist Myanmar, according to reports. The operation resulted in tens of thousands of Muslims fleeing into Bangladesh, escaping from what is described as a hell.

The Rohingya are an ethnic Muslim group living in the Rakhine state. They speak Rohingya or Ruaingga, and have been denied citizenship in Myanmar since 1982.

According to the Arakan Rohingya National Organisation (ARNO), “Due to large scale persecution through ethnic cleansing and genocidal action against them, about 1.5 million Rohingyas are forced to leave their hearth and home since Burmese independence in 1948. Present distribution of the Rohingya population is 2 million inside Myanmar, 600,000 in Bangladesh, 350,000 in Pakistan, 400,000 in Saudi Arabia, and 100,000 in the United Arab Emirates, Thailand, and Malaysia.”

Moreover, Al-Ahzar’s affiliated Council of Muslim Elders warned on Monday of the international community’s silence towards ending the suffering of the Rohingya Muslim minority in Myanmar and halting the persecution and evacuation against the world’s most persecuted minority, according to an official statement.

The council said it believes that persecuting the Rohingya Muslims threatens international peace and security, and reflects the double-standard policy towards the international crises, the statement read.

The council called for forming an international committee to investigate the situation and to put the Myanmar authorities on their legal and humanitarian responsibilities, and putting the United Nations, the Security Council, and the international organisations to take their responsibilities towards the tragedy, which lasted for years and resulted in the killing and evacuation of hundreds of thousands of Rohingya Muslims while the Myanmar authorities fail to protect them, according to the statement.

“The UN charter allows the Security Council to intervene in issues that threatens the international peace and security, in accordance with the seventh chapter of the charter. The situation in Myanmar requires a rapid maneuver, and Muslim countries should move to support Rohingya Muslims,” the statement read.

The statement said the council, cooperating with Al-Azhar, is working on ending the tragedy of Rohingya Muslims through communicating with the Myanmar community in Cairo, but the Myanmar government neglects its promises, and abuses have increased.

Opinion: Out of sight, out of mind

More than 50 million driven from homes by war, crisis: UN