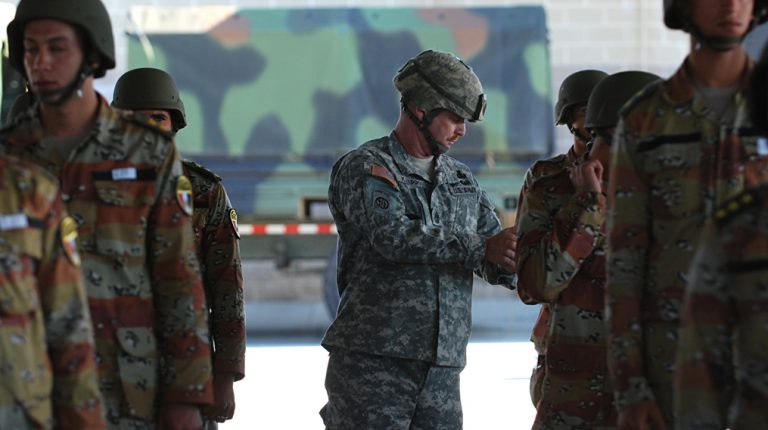 Weeks after the cutting of $300m in military and economic aid, the US announced on Tuesday that it will resume military exercises dubbed “Bright Star” (which is conducted every two years) with Egypt in the newly inaugurated Mohamed Naguib Military Base between 10-20 September.

“Bright Star builds on the strategic security relationship between Egypt and the United States, a historic partnership which plays a leading role in counter terrorism,” a statement from the United States Central Command said.

The military manoeuvres is to take place for the first time since 2009. The statement added that this year the drills will focus on “regional security and cooperation, and promoting interoperability in conventional and irregular warfare scenarios.”

Similarly, the Egyptian armed forces’ spokesperson said in a statement that the drills reveal the strong ties between the two countries.

However, the United States Central Command said that only 200 military personnel will attend the drills, a smaller number to that of previous years, where thousands of troops took part.

The first US-Egyptian joint military training took place in 1980. It then expanded to become a semi-annual training, the most famous of which were the Bright Star manoeuvres in 1999, which included 7,000 soldiers from 11 countries.

Last May, during a meeting with members of the American Chamber of Commerce (AmCham) in Egypt, US ambassador to Egypt Robert Beecroft said that the military manoeuvres start again before the end of the year, after being suspended in 2009.

Both countries have been mobilising against the ongoing threat of “terrorist networks”.

In August 2013, President Barack Obama suspended US participation in Bright Star to protest the dispersal of the sit-ins in support of ousted President Mohamed Morsi in Rabaa Al-Adaweya and Nahda squares.

At the time, Obama condemned the “steps that have been taken by Egypt’s interim government and security forces” and “violence against civilians.”

Military aid was also suspended in October of the same year, but according to the “Egypt Assistance Reform Act” passed in December 2013, foreign funding could return to Egypt in the fiscal year of 2014.

The bill was conditioned with former Secretary of State John Kerry’s assessment of Egypt’s commitment to strategic relationship with the US and its obligations in the 1979 peace treaty with Israel. The bill is also restricted by the Egyptian government’s commitment to a democratic transition.

Bright Star was also cancelled in 2011 due political turmoil after the ousting of then-president Hosni Mubarak.

The military has been in charge of Egypt since a popular revolt overthrew president Hosni Mubarak on 11 February. Egypt’s military has close ties to its US counterpart and receives more than $1bn in aid each year.

After initial US ambivalence toward the pro-democracy protests that erupted in Egypt in January, Washington welcomed the toppling of Mubarak and endorsed a transition to democracy guided by the military council.

The legal arm of the Egyptian intelligence apparatus has meanwhile launched a probe of foreign funding—including American support—of civil society groups. This crackdown was the center of several criticisms against the Egyptian administration under President Abdel Fattah Al-Sisi, as well as cases related to possible violations.

“NGOs’ foreign funding” case, which dates back to December 2011, when prosecutors, backed by the police, stormed the offices of 17 local and international NGOs, including the International Republican Institute, the National Democratic Institute, and Freedom House. The NGOs were being investigated for allegedly receiving illegal foreign funding.