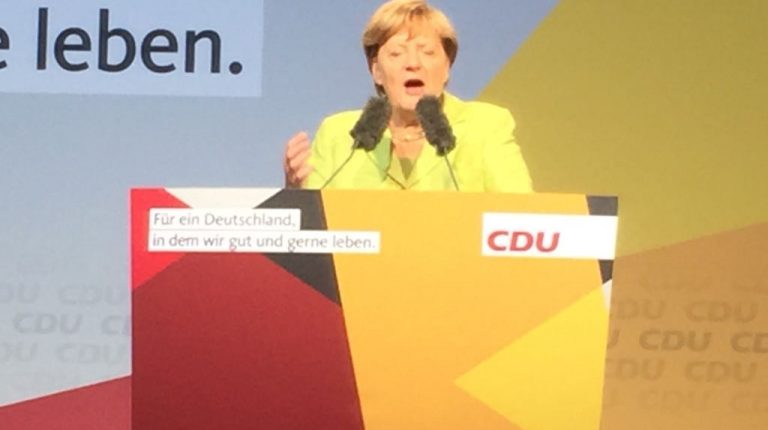 German Chancellor Angela Merkel met with voters during her election campaign in the city of Finister Valde, Brandenburg, on Sunday, 3 September, as part of her tour to promote her party’s candidates for the parliamentary elections.

Merkel’s mass rally witnessed a tripartite scene, with her supporters and opponents present, the later who believe that opening the border to foreigners is a betrayal to her country.

It also witnessed the presence of Syrian refugees who came from all over Germany to thank the German chancellor for the support and care given to them. As Merkel gave her speech, her opponents started disturbing her.

“We want to make a policy that makes citizens feel that they are in their homeland and that they are able to shape their future and live their traditions,” Merkel said.

She added that “this city has a special character in the state of Brandenburg, and we want to preserve this character. Therefore, we support the reforms that you have initiated with regard to the administrative division. We do not want centralization and central government, but we support the existence of small units close to the citizens.”

Merkel continued stating that two and a half weeks later, they are ahead of an important pillar, which is the parliamentary elections of the Bundestag. Michael Fuchs, the head of the German Christian Democrats, and Martin Schultze, the leader of the Social Democratic Party, have been nominated for this pillar, but it is an important day because citizens will be able to draw their future and their living standard in the next four years.

Moreover, she addressed her opponents saying, “those who do not stop screaming should listen and asked them if they had a vision for the future. What are your dreams and concerns? What is your vision for the future of your life because we want to address these issues in the next four years.”

She continued saying, “we in the Christian Democratic Party offer you a program in which we want most people to enjoy a good living in Germany and to love living there. Everyone in this place understands this a bit differently.”

“We have an electoral program that includes a social market economy in the sense that we consider it necessary for those who are skilled labour, or who have projects and family businesses that they can implement their ideas and plans and for employees to get enough salaries and we will achieve it only if we work together,” according to Merkel.

She also said, “we will not raise taxes as the Social Democrats call it. We want to reduce taxes on small and medium-income earners who are still taxed too high. They should reduce the burden on them. This is what I meant by the social market economy policy, which means that even after 10 or 15 years, one has the opportunity to get a good job in light of the rapid transformations that the world is undergoing today. Therefore, we want to invest more in school education to keep pace with the transformations.”

On education, Merkel said, “we want to link rural schools to fast Internet and help economically disadvantaged municipalities. The students come to their schools and have more experience in dealing with smartphones and the Internet than their teachers do, who graduated from universities 15 years ago. So we want to qualify those teachers.”

Nevertheless, she continued saying, “one of the most important priorities we have is the policy of the family. We are a society with fewer births. We know that the decision to have a family is a personal matter.”

“The state cannot make a decision that the family should be cohesive and that parents take care of the sons or vice versa, and we do not impose their way of life on them. But we can support them so that they can assume their responsibilities. We will work on reforms in the tax code if you give us your confidence, and, therefore, we want to increase the amount of tax exempt income for families with children. We also invest in children and we want to achieve an increase in the child’s salary by 25 euros,” she clarified.

“We want families with children to have greater potential to buy what they need,” said Merkel.

Merkel revealed that many of the citizens are worried about internal security and they discussed this issue before coming here. The situation does not please either on the German-Polish border or in this country.

She said, “we must make sure that people are not afraid of losing their property, that the perpetrators are arrested, and that the victims are protected and supported. So we have worked to increase the numbers of police at the state level and at the level of the European Union are doing a wonderful job and I would like to thank the members of the police present here for their great efforts to inquire security at this event.”

However, she mentioned that the police officers need the equipment to do their job and must have legal grounds.

“So we have increased the penalty of house robbery to become a prison sentence—in this case, at least a year,” said Merkel.

“I want to touch upon the subject of Islamic extremism. Everyone is suffering from it not only in Germany, but also in Spain, France, Belgium, and Britain, and we must do everything in our power to detain the dangerous people we know who violate our laws, who plan or support terrorist attacks.”

She clarified that suspects should leave the country and, if they do not have proof of identity, they can be held for months in a deportation facility and not left at no cost.

She continued saying, “we need to fight international Islamic terrorism and intensify international cooperation, both with the United States of America and within the European Union. The efficiency of this cooperation must be improved. Our Minister of Interior, Mr. Thomas de Mazier, is working hard to achieve this.”

Moreover, she said, “I know that in the past four years we have had difficult situations that we had to deal with. I mean the large influx of refugees to us in 2015 from Iraq and Syria. They are being pursued by Al-Assad and the terrorists. Just remember, for example, the situation of Yazidis in Iraq who were looking for shelter and safety.”

She described them as “human beings who are facing a major crisis and, in this regard, they are very grateful to the authorities in the municipalities and localities and to the volunteers who helped.”

Merkel added that the year 2015 should not be repeated. “We learned from that situation that at that time we did not care enough about the living conditions of the people in the refugee camps in Lebanon and Jordan and the 3 million refugees in Turkey, Gangs smuggling people and spent a lot of money and put their lives in danger and came to us,” said Merkel.

According to Merkel, the task is to help the people there where they are suffering.

“No one is leaving his country simply. Therefore, we must fight the causes of displacement. We are working on preparing the camps near Syria better. We are creating future opportunities in the countries of Africa so that young people do not expose their lives to drowning in the Mediterranean,” she explained

During her speech, the chancellor said, “today, the European Court of Justice has ruled that Hungary and Slovakia should be more involved in the reception of refugees. Solidarity should not be unilateral and must be done in all aspects of life in the European Union to be truly a European Union.”

According to Merkel, “given the many wars in Syria, Iraq, and Ukraine, weak states—such as Libya—we find that it is necessary for the European Union member states to cooperate. We are not happy with Britain’s decision to leave the EU, but the member states have informed the union that we are a society in which democratic values, freedom of opinion, and expression and the rule of law prevails, and this is important.”

She explained that “We do not want to talk about each other, but we want to talk to each other. For decades, we have not fought each other but have lived in peace. Europe is the paragon of peace, and it must be preserved because it the most important thing for us is to live in freedom.”

She concluded her speech saying, “given the great refugee crisis of past years, many people in Germany ask what makes us stand up. It is obvious that those who came to us as refugees have to abide by the law and respect our constitution and should be aware of equality between men and women and that we live in freedom and in a state law. And those who want to live with us have to learn German and try to contribute to our society.”

In search of inclusive globalization