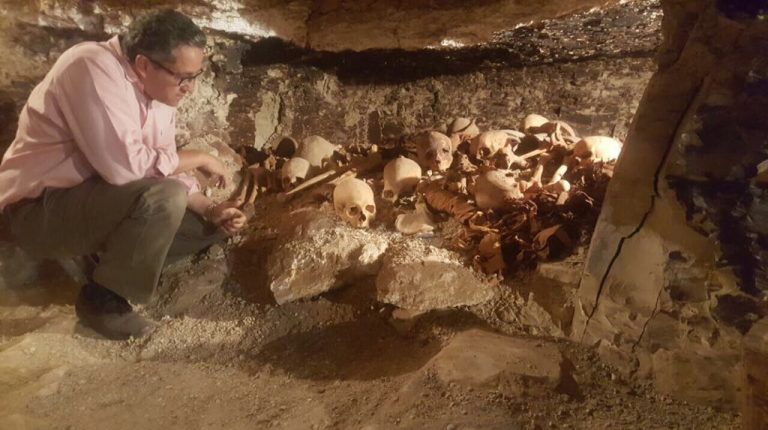 The year of mesmerising discoveries of the Pharaohs keeps surprising the world with further findings about the legacy Egyptian’s ancestors have left. Minister of Antiquities Khaled El-Anany announced Saturday morning the discovery of a new tomb of a goldsmith, (Kampp 390), who lived during the 18th Dynasty in Luxor.

The announcement came in a press conference Anany held at the tomb’s area, Draa Abul-Naga necropolis on Luxor’s west bank.

El-Anany revealed that the goldsmith’s name was “Amenemhat” and tombs of him along his wife and two children were found inside the private tomb along several relics of the goldsmith’s personal belongings, including a feathery collection, pottery, statues, funerary masks, and jewellery.

According to the place of the tomb, where it lies in the same area of the Valley of the Kings and Tutankhamen’s tomb, Amenemhat was one of those responsible for making the jewellery of King Amun and the royal family.

“The important discovery,” as El-Anany described it, is the result of the work of an Egyptian mission of the Ministry of Antiquities led by Mostafa Waziri. The mission started their work last April.

The announcement of the discovery was attended by Luxor Governor Mohamed Badr and the Swiss head of the mission, China’s cultural attaché, and the Greek and Cypriot ambassadors to Egypt.

The entrance of the chamber includes a statue that shows the tombs owner and his wife. With an engraving drawing that depicts Amenemhat sitting on a chair with a high back with his wife standing next to him wearing a long gown. Beneath the statue, remains of a small statue shows one of their sons.

Waziri told state media portal, Ahram Online, that the tomb has two burial sections: the main one which is the biggest is for the tomb’s owner and his wife to be buried at.

Sherine Ahmed Shawqi, is an osteologist and one of the mission’s members who studied the mummies’ bones, stated that studies indicate that the woman was in her fiftieswhen she died, and during her life she suffered from bacterial diseases in her bones as well as severe cavities that led to jaw distortion.

Studies show that the woman probably cried extensively as the size of her carbuncular appears abnormally enlarged.

As for the two children, they are two adult men that have died in their third decade. Their mummies were discovered in a good condition and their bones still have mummification liquids.

In his speech, Waziri stated that one of the male children also suffered from cavities during his life, which also led to some distortion in his jaw. As for the second one, studies show that he was probably put in the same coffin later after his family “because the bones were bare.”

Archaeologist Mohamed Baabash, a member of the excavation team, stated that the mission stumbled upon several objects that were detected to be belong to the tomb owner, Amenemhat.

The seven-metre deep cemetery include an entrance that leads to another Middle Kingdom tomb, Kampp 150. It also includes a courtyard, where a woman and her two children are buried in what’s believed to be another family cemetery. The courtyard includes two wooden coffins with mummies and a collection of headrests.

“We also found a big coffin of the middle kingdom and another coffin for the third intermediate period as well as a number of mummies and skeletons,” El-Anany added in the press conference. The discovered coffins belong to family members of the 21st and 22nd Dynasties, however were destroyed at the late period.

The mission also found limestone of an offering table with four wooden sarcophagus that were decorated with hieroglyphic text and scenes of different ancient Egyptian deities. Yet, they were unearthed fairly damaged with a statue of a trader belongs to King Thutmose III’s era named “Mah”.

The mission also unearthed a collection of 50 funerary cones, 40 of which indicate the presence of other unrevealed cemeteries at the area, which leads them to believe that cemeteries of four other persons; however, none have yet been discovered.

One of these persons are believed to be a minister of Amon and a writer along two other persons.

El-Anany announced that the work of the mission is not done yet, expecting the revelation of another discovery in the upcoming period. “The team is still working to find the rest of the cemetery,” El-Anany added.

Iraqi forces claim key Mosul base, eye victory against ‘IS’

Is Nefertiti hiding in the Valley of Kings’ secret chambers?