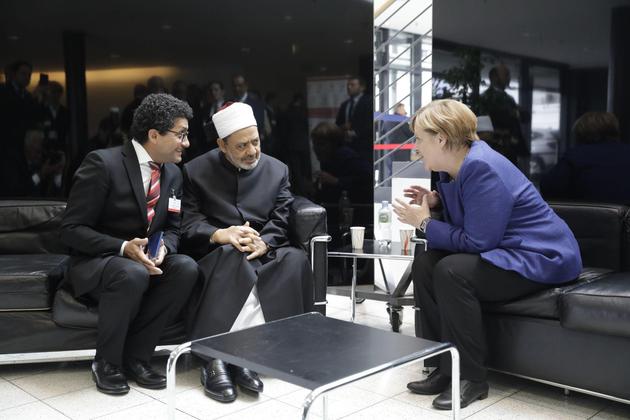 Grand Imam of Al-Azhar Sheikh Ahmed Al-Tayeb said Sunday that the international community has failed to save the Muslim citizens of Rohingya from their sufferings, genocide and forced displacement processes.

During his speech at the conference of global peace entitled “Paths of Peace” in the German city of Münster, at the presence of the Chancellor of Germany Angela Merkel and several religious leaders, Al-Tayeb repeated his previous opinion that “the statements of condemnation and denunciation are no longer meaningful. They are a waste of time and a squander of energy.”

He added that he believes that “most of these [international] institutions would turn a blind eye to bloodshed, corpses, children’s cries, orphans’ tears and deep sighs of mothers bereaved of their children.”

“The concept of war has been changed due to the technologically and scientifically advanced death industry. The raging wars have become so destructive that they could devour safe civilians inside their homes, streets, villages, towns, cities, schools, and clubs … force them to flee from the hell of the deadly weapons, leaving their homeland for an unknown destination in painful experiences whose beginnings they only know. They are sometimes forced by panic and fear to ride the sea and end up drowned or wrecked in the deep seas.” the grand imam added.

Although his mention of the opinions say that most of the systematic destruction in the East is caused by Islamist terrorism, Al-Tayeb accused the West of being involved in this destruction by arms dealings held in the West, saying that “these arms dealers need to ensure the continuity of their production and sales. They then search for territories where religious or doctrinal conflicts can be fuelled to call people to armed and bloody fights.”

He also did not exempt the Arab and Muslim East from bearing its due share of the historical responsibility for terrorism, the responsibility which he referred to many interrelated political, religious, educational, and social causes. The East “was a good-doer to the west, for which it provided much of its civilisation and spread in all its corners the origins of science, culture, literature, and art,” Al-Tayeb added.

The only way to global peace in Al-Tayeb’s opinion is to achieve peace among the religions, confirming Al-Azhar’s willingness to make peace with all divinely-revealed messages and other religions.

Opinion: Out of sight, out of mind