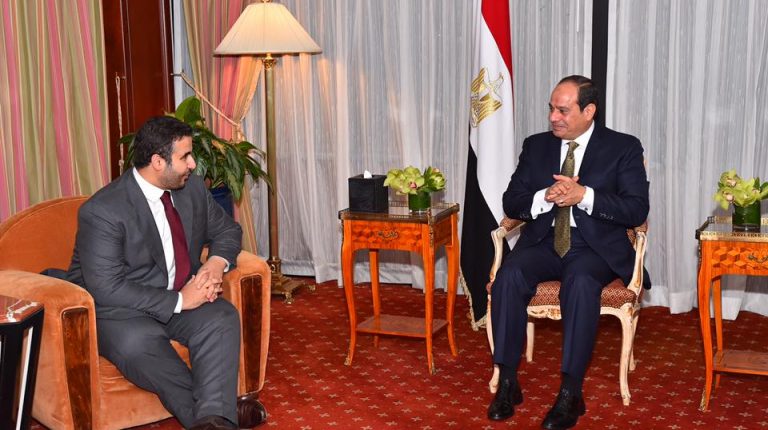 President Abdel Fattah Al-Sisi will speak on recent efforts taken in fields of economic, international affairs, and counter-terrorism in his speech during the opening session of 72nd annual United Nation General Assembly that will start on Tuesday.

Al-Sisi arrived to new York on Sunday to participate in UNGA, in which will mark his fourth participation since taking the office 2014. Minister of Foreign Affairs Sameh Shoukry will also attend the sessions.

The president will review Egypt’s challenges throughout 2017, as the country has witnessed recent economic measures following the implementation of International Monetary Fund (IMF) loan, security and legislative amendment to confront terrorism. Also, Egypt has participated in several talks that aimed at finding possible solutions for Syrian, Iraqi and Libyan crises and Palestinian issue as well.

He will also present a statement by Egypt to the Security Council summit on the reform of UN peacekeeping operations, which will include a review of Egyptian efforts in this regard. The president will also attend the meeting on the situation of Libya which will be organized by the UN to support efforts to reach a political settlement of the crisis.

Egypt is the 7th largest country contributing to peacekeeping forces, according to a presidential statement issued Saturday, which further stated that the country has participated in 37 UN missions in Asia, Africa, Latin America and Europe with a total of 30,000 personnel. According to UN statistics last updated in June 2017, Egypt is contributing with 3,060 personnel including 2,107 troops, 879 police personnel and 74 military experts.

On Monday, Al-Sisi is scheduled to meet with members of American Chamber, Business Council for International Understanding, and to be interviewed by Fox News. He also has attended meetings with United Arab of Emirates (UAE) Foreign Minister Sheikh Abdullah Bin Zayed, and Saudi Ambassador Ambassador of the Kingdom of Saudi Arabia to the United States.

During his meeting with UAE official, Al-Sisi praised the speciality of the bilateral relations, and asserted that challenges of the current stage requires concerted efforts among all Arab countries to promote joint Arab action and to confront attempts of interfering in country’s affairs.

On his side, the Emirati official expressed his country’s keenness to enhance relations with Egypt, through increasing cooperation that will meet interest of both countries.

The minister also praised the level of coordination and intensive consultation with Egypt that helped in addressing the challenges and dangers facing the region, especially terrorism, and referred to the importance of Arab union to face attempts to threatening the security and stability of the Arab peoples.

The meeting also included discussion over Arab and regional issues and the topics that will be discussed during meetings of UNGA.

Regarding his meeting with the Saudi diplomat, both sides confirmed the strength of their bilateral relations. The Saudi ambassador asserted his country’s keenness on developing the cooperation with Egypt.
The meeting witnessed the discussion of a number of issues and issues of common interest, especially ways to reach political solutions to the crises of Middle East.

Al-Sisi is scheduled to meet with United States (US) president Donald Trump and other leaders to discuss means of enhancing bilateral relations between Egypt and their countries, as well as exchanging views and views on regional and international developments of common concern.
The Egyptian participation last year and this year are exceptional, due to Egypt’s non-permanent membership in the UN Security Council, which will conclude at the end of 2017.