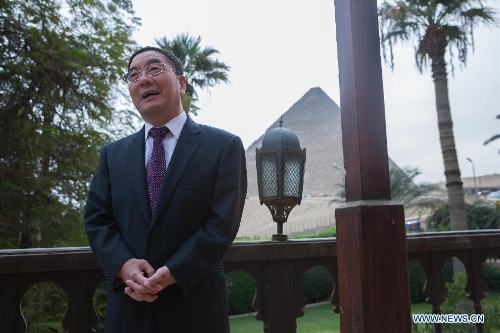 In mid-August, China and Egypt signed an agreement regarding launching a railway project, which will link the railway lines between central Cairo, 10th of Ramadan City, and the New Administrative Capital.

During Egyptian President Abdel Fattah Al-Sisi’s visit to China to attend the 9th round of the BRICS summit, was held from 3 to 5 September in Beijing, both sides reached an agreement regarding the electric train project that links 10th of Ramadan City with the New Administrative Capital through Chinese financing, at a total cost of about $739m.

Moreover, they reached an economic and technical cooperation agreement, in which China will provide a $45m non-refundable grant for the implementation of the Egypt Satellite 2 (Egypt Sat-2) project to serve research projects and remote sensing.

Furthermore, financial arrangements are expected to be signed and carried out between Egypt and China after Egypt’s participation in the BRICS summit, according to Chinese ambassador to Egypt Song Aiguo.

Daily News Egypt interviewed Aiguo to get more insight into the new Chinese projects in Egypt in new cities and also his vision regarding the recent economic reforms that the government of Egypt took within its economic reform programme 2030.

What is your opinion regarding the current recent economic reforms taken by the Egyptian government?

I think it is encouraging and is still improving.

Do you think that the tough decisions undertaken by the Egyptian government will participate in economic recovery?

According to China’s experience, you have to take very hard decisions; otherwise, the country will remain in difficulties. Reforms are necessary and are engines of growth.

Indeed, in the first years after the reforms, there are some difficulties, but, in the long run, there will be a lot of opportunities that will be good for the country.

What is your opinion regarding the liberalisation of the Egyptian pound exchange rate?

I think a steady value of the Egyptian pound is important. Otherwise, businesspeople would be a bit worried or hesitant to invest because of the devaluation of the local currency; therefore, we would like to see the pound enjoy stability.

Do you think the liberalisation will play a vital role in promoting trade exchange between Egypt and China?

Of course, the devaluation in the pound’s value will make a revolution in increasing Egypt’s exports to China. In addition, I expect an increase in the volume of trade exchange between the two countries by the end of the year, especially as China intends to increase its imports of agriculture crops and food from Egypt.

China is negotiating with Egypt to launch new projects in the New Administrative Capital and Ain Sokhna. What is the nature of these projects?

Negotiations are ongoing between Chinese companies and the government of Egypt to participate in developing projects in the New Administrative Capital and Ain Sokhna.

Furthermore, the New Administrative Capital will not only be established for administrative affairs, but also for all areas and sectors.

Egypt is in the process of building new commercial areas in which China can participate.

What are the details regarding the big project China is negotiating with the Egyptian government to be launched in the New Administrative Capital?

China is negotiating with the Ministry of Investment and International Cooperation to establish an industrial area, which will be an integrated area of services that includes a good number of industrial facilities, schools, and hospitals. The area will be a new project that includes both production activities and services that will benefit all other businesses in the New Administrative Capital.

When will the project be carried out?

It depends on the progress of the construction of the New Administrative Capital. Besides, the private Chinese company that will carry out the project is now in the negotiations phase with the ministry. I do not know when they will reach an agreement, but it seems that the negotiations are going well.