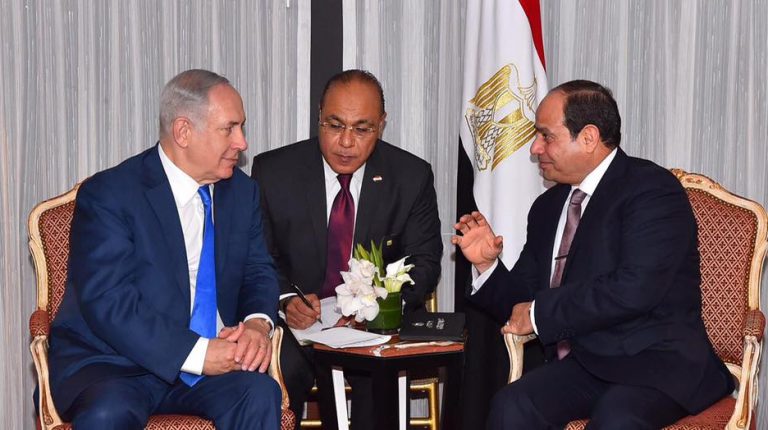 In the sidelines of the UN General Assembly meetings in the US, Egypt’s President Abdel Fattah Al-Sisi discussed the Palestinian issue separately with the president of the Palestinian Authority, Mahmoud Abbas, and the Israeli Prime Minister Benjamin Netanyahu, Monday, presidency spokesperson Alaa Youssef said in a statement.

During the meeting, Abbas praised the Egyptian efforts in achieving the Palestinian reconciliation between Palestinian movements. He also expressed his relief for the Hamas announcement on dissolving its administrative committee in Gaza, asserting that the Palestinian Authority tends to end the division and to unify the Palestinian people, according to the statement.

Al-Sisi asserted that the Palestinian issue remains on top of Egypt’s foreign policy priorities, stressing that his country will continue its efforts with the Palestinian parties to end the division between movements in Gaza and West Bank, which will allow the reconciliation government to carry out its duties over all Palestinian territories.

The two leaders agreed to continue consultation and coordination in order to follow up the upcoming steps in unifying the Palestinian people and establishing its independent state, according to the statement.

In their first public meeting, Al-Sisi and Netanyahu discussed reviving the peace process. Al-Sisi stressed Egypt’s keenness on  restoring the peace negotiations between the Palestinian and Israeli parties to reach a fair and comprehensive solution for the issue, praising US President Trump efforts on this regard, the statement read.

According to the statement, Netanyahu expressed his appreciation for the Egyptian role in the Middle East, and its efforts in confronting terrorism and restoring stability in the region. The meeting also discussed establishing the Palestinian state.

The meeting was “the first ever public meeting between the two leaders who met twice secretly in 2016, and who speak on the phone periodically.” according to the Jerusalem Post.

Meanwhile, Abbas received a phone call from the leader of the political bureau of Hamas Ismail Haniya, expressing Hamas’ insistence to end the division. Abbas welcomed the step. Following the call, the Palestinian Prime Minister Rami Hamdallah expressed his intention to visit Gaza.

On Sunday, The Palestinian Islamic Resistance Movement (Hamas) announced dissolving its administrative committee in Gaza strip, in order to end the escalation with Fatah which the President of Palestinian Authority Mahmoud Abbas belongs to, according to Hamas’ official statement.

Hamas stressed that this step comes as a response to the Egyptian efforts especially the Egyptian intelligence. The last three months witnessed visits of Hamas’ delegations to Egypt, to hold discussions with Egyptian officials.