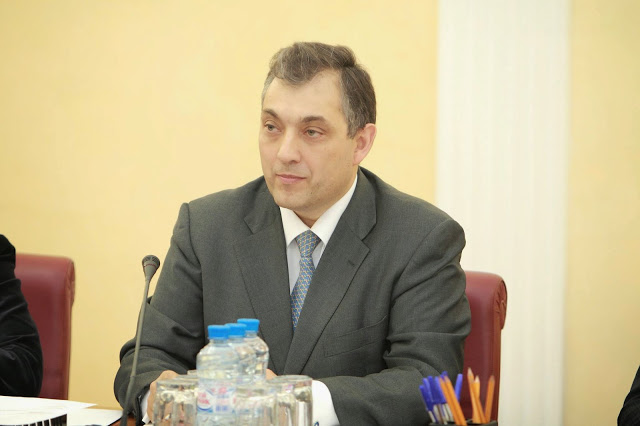 Daily News Egypt interviewed Chairperson of the Russian-Egyptian Business Council Mikhail Orlov to talk about the opportunities and challenges of Russian business in Egypt and the development of establishing the Russian Industrial Zone in Port Said.

What is the update regarding the Egyptian-Russian-Emirati fund, which was declared in the conference?

So far, no fund has been launched yet. The Russian-Egyptian Business Council was not involved in this project.

How much money is designated for the fund?

The volume of the joint investment fund was planned to amount to $500m in the first stage.

Are Russian companies participating in this fund?

The Russian Direct Investment Fund (RDIF) is the only participant from the Russian side—in this stage at least.

What is the role of the council in developing the business market in Egypt and Russia?

The council is working out initiatives aimed at improving bilateral cooperation; organising business-to-business meetings for potential Russian and Egyptian partners; and participating and/or organising conferences, business missions, round tables, etc.

We are also participating in the preparation and realisation of the Russian-Egyptian agreements and programmes in the field of trade and economic relations, establishing contacts and joint work with the public structures of Russia and Egypt, and providing information services to Russian and Egyptian businesspeople.

Furthermore, the council is preparing analytical materials in different fields of Russian-Egyptian cooperation and improving cross-cultural competence among Russian and Egyptian businesspeople.

Do you think it is possible to rely on the local currencies of both countries in the future economic exchange between Russia and Egypt?

The Russian-Egyptian Business Council has been raising this question since the very beginning of its relaunching in 2014.

For technical reasons, the full conversion is not possible, but interbank and other settlement mechanisms should be put in place as the first priority.

What do Russian companies demand from the Egyptian government to boost investments?

The Russian-Egyptian Business Council put forward the following initiatives, which will promote the strengthening of Russian-Egyptian trade and economic relations and boost investments: first, the renewal of direct flights between Russia and Egypt; and, second, the transition into settlements in national currencies between Russia and Egypt, which is the direct conversion of currency without being bound to the US dollar or the euro.

Also, we established in Egypt a unified customs and logistics centre, including a joint service for veterinary and phytosanitary surveillance and different forms of tax alleviation.

What are the challenges that Russian companies face in the Egyptian market?

The major challenge is systematic. Russian companies very often do not understand the roadmap of operating in Egypt.

Another challenge that Russian companies face in the Egyptian market is the cultural difference in doing business.

What is your opinion regarding the recent economic reforms taken by the Egyptian government?

The challenges are enormous, and the Egyptian government is making gigantic efforts to reform its economy. It deserves a lot of respect and support.

How do you see the liberalisation of the exchange rate in Egypt and its effect on the investment climate?

The process has been very well managed, and it is significantly improving the investment climate.

What was the size of Russian investments in Egypt by the end of 2016?

However, before investment flows increase, we need to massively increase trading volumes first.

To achieve this, we believe that more has to be achieved in improving the trading framework between two countries.

What is the size of Egyptian investments in Russia?

So far, we have seen no major Egyptian presence in Russia.

The only noticeable sign is the fact that Banque Misr opened a small representative office in Moscow recently.

What stands in the way of Russian investment in the industrial zone?

The management company “Russian Industrial Zone in Egypt” is planned to be established in the beginning of 2018. The projecting of the first stage of the industrial zone with dimensions of 197.68 feddans will start after that.

According to the declaration of the Russian Ministry of Industry and Trade, the total cost of the project is announced to be $6.9bn, among which $6.4bn are the investments of the residents and investors and $500m are the infrastructure investments of the management company. It is expected that by 2026, the gross output of the residents of the Russian Industrial Zone will be about $3.6bn per year.

The infrastructure of the area will include both prepared industrial buildings for the production location and prepared plots of land. Within the framework of the project, the Egyptian side is planning to provide preferences for state orders for the residents of the zone, privileges in the form of land use rights for the period of a minimum of 50 years for a “symbolic fee”, deferred payment, reduced tariffs for utilities, and an increase in the limit of foreign employees in the companies – residents. Corporate income tax should be set at 10%, income tax for individual entrepreneurs at 10%, and income tax duty at 5%. Sales tax on the local market will be 0%.

Shall we expect an official Russian delegation visiting Egypt in the coming period?

The dates will be coordinated through the two countries’ diplomatic channels.

Regarding Egyptian fruit exports to Russia, do you think it the export shipments join photo-sanitary permits?

The creation of a joint phytosanitary service would significantly boost this segment of trade.

Did the Egyptian government discuss the issue of increasing wheat imports from Russia or new wheat shipments?

The Russian-Egyptian Business Council maintained its opinion that the supplies and demands between Russia and Egypt could and should be significantly more vertically integrated, both in terms of infrastructure and trading mechanisms.

Do Russian banks have potential to enter the Egyptian market?

We have no information that Russian banks are actively considering launching operations in the Egyptian market.

Some of them, though, can consider opening a small representation office to start studying the market.

What other non-western markets has Russia entered into?

After the breakdown of the Soviet Union, Russia has consolidated its market presence in several former Soviet states.

Moreover, Russia has significantly intensified its trading relationships with China, India, and Vietnam.

Also, it consolidated the activities of the Eurasian economic zone with the perspectives of new countries to join.

What is the size of the trade exchange between Egypt and Russia? Furthermore, how can trade be promoted?

In Q1 2017 and Q1 2016, the essential share of supply in the structure of Russian exports to Egypt was the following:

In Q1 2017 and Q1 2016, the essential share of supply in the structure of Russian imports from Egypt was the following:

To what extent did the downing of the Russian aeroplane affect Russian tourism to Egypt?

Russian tourists like Egypt because it is a cheap country and because its close location and excellent climate. That is why when all flights to Egypt were cancelled, Russian tourists faced the problem of where to go for a holiday.

Many people are asking us about when Russians will open up flights to Egypt. It indicates that Russians still want to go there and are waiting for the renewal of direct flights between the two countries.

Nevertheless, it is important to notice that security is more and more of a major issue, especially taking into account the fact that more than 200 people lost their lives in the aeroplane crash.

What are your expectations to end the crisis?

What are the council’s efforts to support and promote tourism to Egypt after the Russian aeroplane accident?

It is more politics than anything else. That is why the Russian-Egyptian Business Council is unable to influence or promote anything.

Nevertheless, we have organised several business missions and leisure trips, both to Egypt and Russia. But we also would like to see more promotion for Egyptian tourists to visit Russia.

What are the latest developments regarding the return of Russian flights?

According to recent announcements, there are hopes that it might happen soon.

The latest inspection of the airport in Cairo showed, in general, the compliance of the new terminal of Cairo Airport with the international and Russian requirements for aviation safety. Therefore, there are no obstacles for the renewal of direct flights connecting the two countries.

The Russian Ministry of Transportation sent a report to the Russian cabinet following the results of the security inspection of the airport in Cairo.

Russian Minister of Transportation Maxim Sokolov specified that there is no need for additional security inspections of Cairo Airport. Flight connections between Russia and Egypt might be renewed after dealing with regulatory and documentary formalities.

Supposedly, the first direct flights will start running between Moscow and Cairo this autumn, and, later on by winter, the charter flights to Sharm El-Sheikh and Hurghada will be renewed.