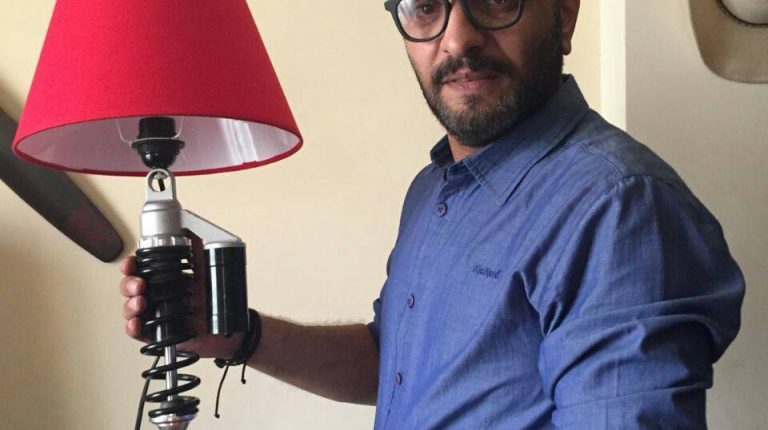 The art of recycling scrap cars is a simple idea that was carried out by many creative people around the world, including Egypt, but it has not officially appeared in different parts of the world. It has been a hobby passed on by artists who draw different paintings in distinctive shapes, made entirely from scrap of totalled cars and sometimes new parts formed according to the artist’s vision.

Despite the fact that it is a unique idea that everyone admired, especially those who have a passion for cars, it did not materialise officially. Artists who design things with their own hands just make four or five units of whatever they build and stop whenever they see that there is no demand for their product.

Elhamy Ezzat is known in the automotive sector. He distinguished himself throughout the work experience, which exceeded 30 years, during which he worked at different dealerships. He began his career with sales, followed by becoming the marketing manager of Mini Egypt.

Due to his strange love for cars, he began participating in gatherings of classical cars. He revived them in the same shape and style they first saw light in.

He then moved to the outside world. Major companies followed his precise techniques in the re-operation and renovation of classic cars as well as being a TV host and editor for many automotive shows in Egypt.

Recently, he formulated a new idea, offering it to both the automotive and decoration sectors. He worked on his idea slowly until he revealed it to us, which increased the demand on his product outside Egypt—hence giving a boost to his new career. Ezzat talked exclusively to Daily News Egypt about his Junkyart company.

How did the idea of ​​the project come to light, and what were the most important challenges you faced?

The idea was not new to me, and I have tried repeatedly to make simple products to put in my house as my own decoration. Over time, especially after I quit working in cars dealerships, the idea hit me back. Why should I leave it as a hobby, I thought. I began making some patterns from the bits and pieces of new and old cars. I began working—and the results were amazing and were met with appreciation from all around me.

What steps have you taken to start your project?

In other words, I started the process of manufacturing more and more difficult products gradually until I began a career. I established a workshop in the Craftsmen City to prepare these products and turn ideas and drawings on paper into actual products. The projects began with very simple capabilities, especially since all my products are handmade. I found good demand from clients, including requests from Arab and foreign countries.

Have you created a company for this purpose and registered your products?

I did establish a company called Junkyart. The company is registered as an enterprise that is specialised in the recycling of scrap as decoration. This was the source of the name. The scrap yard is known everywhere as a “junkyard”.

Unfortunately, all the companies that depend on the handicraft industry suffer from product degradation, lack of liquidity, and marketing, and therefore fight for survival. Most of them shut down.

But I hope the situation will change with my company. Sadly, professionals are rare to find. This is a real problem. With the increase on demand of my products, it appeared. Even though I carry out most of the work, I still need labour, especially as my products are 100% handmade in Egypt.

How did you overcome the funding obstacle?

The financing of the project in the first phase was not a hindrance. I have fulfilled all the requirements. However, as the volume of demand increased, the funding problem started. I am currently studying several proposals for funding and expansion.

Are you seeking state funding, especially since there is a tendency to operate and finance such projects?

I am currently studying some of the proposals by the Social Fund for Development and by several small and medium enterprises (SMEs) institutions to enter with me as partners to expand the enterprise.

How did you reach the world?

It is now very simple. Through the various social networking pages, I have introduced some products, and many people have liked them. They reached me, and I offered them samples. Due to the good quality of the products, I met a large demand on the products of my company from clients in Arab and foreign countries. I still have hope to expand further and increase the size of sales and production in the near future.

How do you get parts, since many of your products are based on models made in the 1950s and 1960s?

Egypt has a lot of scrap unknown to many people. When I search, I find things I never imagined I would find. Yet, as time passes by, the parts become rarer, and parts will eventually disappear.

This makes its production cost surge.

What are your future projects?

The beginning will be through the Automech Formula to announce the official launch of the company and offer our products. We will then move in with new products, such as furniture with the same signature ideas.