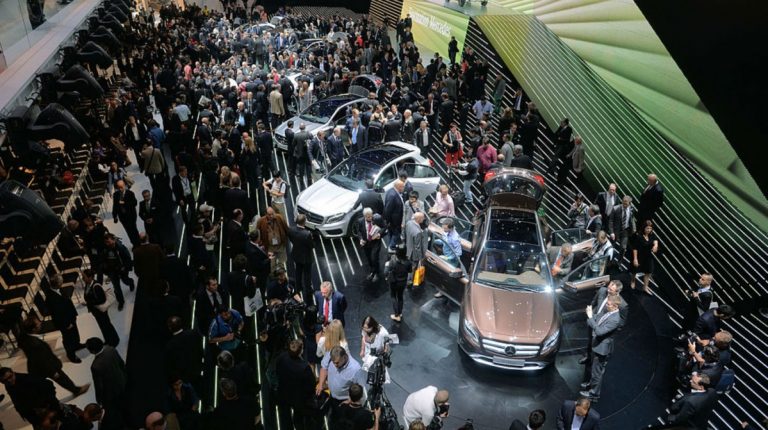 The 67th International Motor Show (IAA) will open its doors in Frankfurt under the slogan “Future Now” aiming to present the latest trends in cars and mobility, especially electric. The show started on Thursday September 14 and will last for 10 days.

German Chancellor Angela Merkel has opened the show for the public that focuses on driving directions and electric mobility, in addition to concepts of urban mobility in the future.

The show is expected to reveal a wide range of innovations from around the world so visitors can discover more about future passenger cars and powerful test engines.

More than 900,000 visitors and 1,100 exhibitors from 39 countries are expected to take part in the exhibition, which will include 230,000 square meters, with 219 international athletes in the automotive sector.

The main motive for the show is to present cars that are not seen anywhere else by presenting new models from different manufacturers that will be available for test engines including the fast driving with Frankfurt.

The IAA will also feature special models for the auto-modified “auto-makers”, for visitors to enjoy new models of miniature vehicles, as well as models for enthusiasts and collectors of classic model cars throughout Europe as the number one show of its kind.

The IAA also organizes entertainment programs for children, with the help of many attractions through a children’s theatre, a play area, and safe racing. A wide range of events provide a lot of attention and fun for children who will not be a barrier to visitors from families.

The show brings together many live shows, conferences and exhibitions for various technology companies. The audience is comprised of car manufacturers and suppliers from many technology companies and start-ups, including companies including Facebook, Kaspersky Lab, Bellaplakar, Muya, Siemens, Telekom, Daimler, Mobil, and Metaxi.

The first German auto show was “Refurbished Cars” with the participation of eight cars, specifically exhibited at the Bristol Hotel in Berlin in 1905 until 1911. The exhibitions were interrupted because of the First World War.

After the end of the war, Germany organized a purely national event that included motorcycles for the first time, and then international car shows returned again in Cologne, Leipzig and Berlin.

The exhibition is open to young people interested in the sector who want a career in the automotive industry and are looking for contacts with high-level employers.

The sections of the exhibition, such as “Job and Employment”, “AutoProv” and “Automotive Professions”, can be visited. Auto enthusiasts have some ideas in their future field.

The new show will feature the unveiling of new models of SUV models and a strong presence of superpower models and luxury cars. The biggest of the show will be at the Mercedes showroom in which President of Mercedes Benz AMG, Tobias Moers stands next to his new car, Project One, Which appear in the framework of celebrations of the golden Jubilee of AMG, a Formula 1 car with a permit to walk on normal roads.

The German company launched the Project One 735 kW / 1000hp, allowing it to exceed the maximum speed of 360 km / h, all derived from a hybrid drive consisting of a 1.6 litre V6 engine and four electric motors. The price of the super car is expected to be around €3m.

There are no other major offers at least from Mercedes, despite the readiness of the new CLS, and the next generation of the G class, but those will wait a few months behind the curtains.

Mercedes has launched its new super car, announced Audi, to unveil the most powerful models A8, BMW offers the big exhibition car Gran Turismo Category 5, which is 6 seats, and the new version of the X3, all advanced by the eighth generation From Rolls-Royce Phantom.

The British luxury car is based on ultra-luxurious technology solutions including electric doors, which are closed after touching the sensor on the knob.

The company said that the new car has the highest standards of comfort thanks to the adoption of a more intelligent suspension system with improved noise insulation system.

In addition to an extraordinarily luxury and sporty luxury Bentley reveals its luxury Continental car and Porsche for the third version of its Cayenne, as well as the BMW for the new M5 with the first four-wheel drive.

Alongside the powerful horsepower models and precious parts, the Frankfurt International Fair can not be free of small purse holders and larger slide models; Volkswagen unveils its new Polo and the new T-Roc.

Far East companies are coming to join the emperors of the car industries, eg Cayenne, X3 and T-Roc. Hyundai and Kia are present the Kona and Stonic models.

Opel is taking part in the new Grandland X and the Jaguar F-Pace as a smaller brother of the E-Pace, while Renault is offering the new version of Duster.

Citroen is expected to offer new models at special events, while Nissan has confirmed that it will not participate in the exhibition, and the Japanese company will focus on events that increase attractiveness and reach more buyers with a focus on media media and advertising.