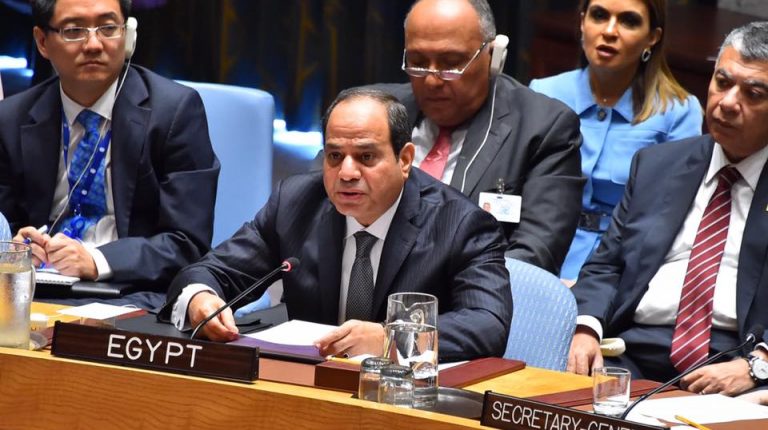 “We still continue to suffer from the inability to contain and prevent armed conflicts, to confront the threat of terrorism and nuclear disarmament, and to address the major imbalances in the global economic system,” President Abdel Fattah Al-Sisi said in his speech during the opening session of the 72nd session of the United Nations General Assembly (UNGA).

This came as an explanation of how the president views the current situation of the world, which resulted in a wide gap between developed and developing nations, as he asserted that the responsibility of granting developed and safety societies requires being honest by admitting that the desired and possible world is, unfortunately, still far from being achieved.

During his speech, Al-Sisi further highlighted his evaluation for efforts taken for regional issues and counter terrorism as well.

On the top of the regional issues he reviewed was the Palestinian issue, as Al-Sisi called on the Palestinian people to unite, not to disagree, not to waste the opportunity, and to accept coexistence with the Israelis to achieve stability and security.

The president also delivered a message to Israeli’s referring to their experience of peace with Egypt, which dates back to more than 40 years ago, saying “we can repeat this experience and the wonderful step again.”

Moreover, the president also affirmed the continual of Egypt’s role in solving issues of countries in Middle East, and discussed importance of confronting extremist ideologies to combat terrorism.

The president started his speech, saying that Egypt believes in the values of the United Nations (UN) and the goals of its Charter, adding that Egypt has a long experience with the UN, one of the founding nations of this organisation, and has been elected as a member of the Security Council six times and is the seventh largest contributor to UN peacekeeping operations worldwide.