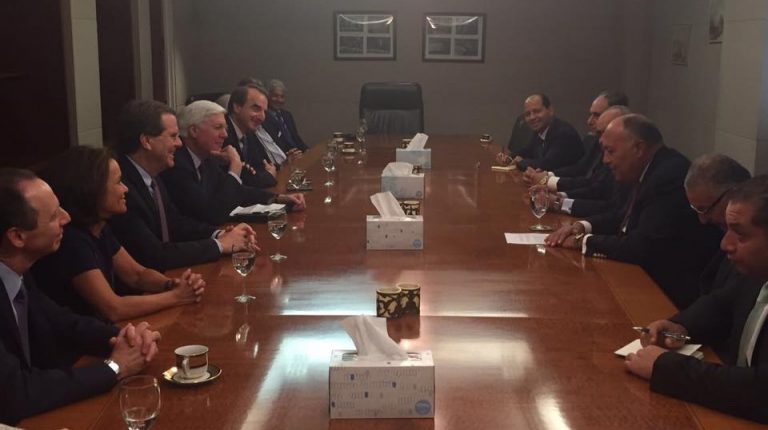 As a continuation of Egypt’s efforts to settle the Palestinian issue, Ministry of Foreign Affairs Sameh Shoukry meet on Saturday with members of American-Jewish Committee (AJC).

The meeting came as part of Egypt to revive the Israeli-Palestinian peace process.

During the meeting, the officials discussed Egypt’s effort to achieve the Palestinian national reconciliation and ways to deal with the situation in Gaza Strip. They also discussed regional issues in Syria, Iraq, and Yemen.

Shoukry further confirmed the importance of the American parties to activate and promote Egyptian-American relations and the importance of intensifying coordination and political consultation on regional issues. They further discussed counter terrorism efforts and President Abdel Fattah Al-Sisi’s initiative to renew religious discourse.

The committee praised Egypt efforts towards the Palestinian issue and expressed their support to these efforts.

The Egyptian president called multiple times to settle the Palestinian issue in the peaceful way. During his recent speech in the UNGA 72, he called on Palestinians to reunite and not to waste a chance to achieve peace.

During his speech in the UNGA 72, the minister said that what Egypt did recently to end conflicts between Palestinian factions always emphasises its pioneering and historical role towards Arab nations.

He further said that the Palestinian issue is not a religious issue, but rather a political one, asserting on the necessity of ending the occupation and stopping violence against the Palestinian people.

Al-Khalifa called on Israel to stop its violation against people in places of worship and holy places in Al-Quds, as this provokes Muslims, confirming that this is the only method to reach a settlement.

Moreover, Palestinian President Mahmoud Abbas said during his speech in the UNGA 72 that “70 years have passed on Palestine’s division, 50 years on Israel’s occupation of the remaining lands of Palestine, and 100 years on the anniversary of Palestinians leaving their land.”

Shoukry met with the committee in June and discussed Egyptian-US relations, which have witnessed an improvement since the inauguration of US President Donald Trump.

Egypt has played the role of a mediator between Hamas and the Palestinian government, as an attempt to settle the conflicts. Shoukry visited Israel in 2015 to revive the peace process between both countries and to support the two-state solution.

Al-Sisi met with Abbas and Israeli Prime Minister Benjamin Netanyahu and discussed the latest updates of the reconciliation process between Fatah and Hamas.