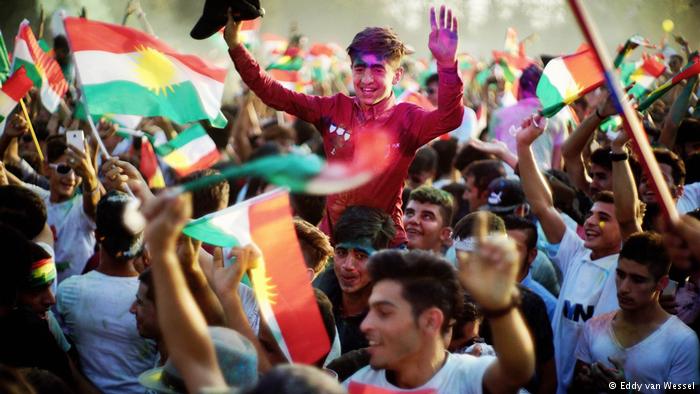 Iraqi Kurds asserted going through with a referendum to seek independence amid international and regional rejection of separating Kurdistan from Iraq. The Kurds see the referendum as part of a bigger project through which they aim to gather their communities in Iraq, Syria, Turkey, and Iran.

Ahead of the scheduled day of the referendum, Monday, the US renewed its opposition, urging Kurdish President Masoud Barzani to postpone it. The Iraqi government declared the referendum unconstitutional. On Sunday, the Consultant of the Iraqi National Security and head of the Popular Mobilisations Units (PMU) said in a statement that the Iraqi government will take all its responsibilities to keep the integrity of all Iraqi territories in accordance with the Iraqi constitution.

But Barzani insisted on calling on the whole Kurdish community to vote. On Friday, he spoke before thousands of supporters in a rally in Erbil saying that the Iraqi constitution did not state integrity but rather unity, accusing Baghdad of being a sectarian, rather than a civic, government, treating the people of Kurdistan as second-class citizens.

Not all Kurds, however, support the referendum. Several political parties are against it, such as the Islamic Movement and the Gorran Movement.

“Holding the referendum at this time is because of the failure of the Democratic Party, which Barzani belongs to, and to use it as a pressure on the Iraqi government to achieve its political and economic benefits and to remain in power,” Khwaz told Daily News Egypt on Sunday.

Another problem between the Iraqi government and the Kurds are territories under dispute. Among those is the city of Kirkuk, where Governor Najmaldin Karim reiterated on Saturday holding the referendum in the governorate as planned.

Kirkuk is one of Iraq’s disputed territories where different ethnicities live, like Arabs, Kurds, and Turks, in addition to its massive production of oil. According to a professor of national security at the Iraqi Al-Nahrain University, Hussein Allawi, Iraqi forces might intervene in regions such as Kirkuk “to impose the law and keep civic peace, but not to fight the Kurds.”

“While the Kurds’ priority is to build their own political body, the Iraqi government is focusing on confronting the Islamic State (IS) group,” Allawi explained to Daily News Egypt. “As so, the political dispute between Baghdad and Erbil will not [negatively] affect anti-IS operations,” he added.

The Iraqi Kurdistan region is just a part of the traditional homeland of the Kurds, which are considered the Middle East’s fourth-largest ethnic group after Arabs, Persians, and Türkmen. There are millions of Kurds who also live in south-eastern Turkey, north-eastern Syria, north-western Iran, and south-western Armenia.

An Iraqi expert in political geography, Mushtaq Khalil, argued that Kurds have the right to hold their own region, in accordance with the Iraqi constitution. “In fact, Kurdistan is an independent region since the 1990s and have their own army, government, and embassies in several countries.”

For Ankara, the referendum is a “big mistake,” according to Turkish Prime Minister Binali Yildirim, who warned that Turkey might take “security, diplomatic, political, and economic” measures as a response to the referendum.

On Saturday, in his statements before attending a session at the Turkish parliament to vote in extending the mission of the Turkish forces in Iran and Syria, Yildrim added that these measures will be taken in cooperation with Iraq and Iran. He also did not exclude a military operation “beyond borders.”

Turkish political analyst Oktay Ylmz believes that what happens in Syria or Iraq has reflects on Turkey, Ankara is also interested in keeping the rights of Türkmen in Iraq. According to Ylmz, this referendum threatens Ankara’s national security and may encourage millions of Kurds in Turkey to think about such maneouvres.

On the eastern front, the Islamic Republic of Iran launched on Sunday military drills close to its borders with Iraqi Kurdistan. Iran also refuses the referendum, considering it a “serious danger” on the region.

Meanwhile in Syria, Kurds started voting in the North Syria Federation, which they have announced a year ago after the deterioration of the situation in Syria as a result of the uprising and the fighting against the IS.

Israel is the only side to announce its official support of the referendum on separating Kurdistan from Iraq.