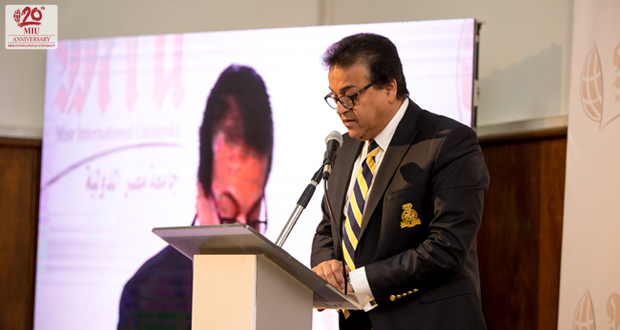 The Ministry of Higher Education and Scientific Research has examined about 10 requests to establish private and national universities before the end of this year. The ministry also plans to transform about 45 technical institutions affiliated to technological colleges into specialised technical colleges before the end of June, according to Minister of Higher Education and Scientific Research Khaled Abdel Ghaffar.

Abdel Ghaffar said in an interview with Daily News Egypt that the ministry is holding negotiations with a number of local and foreign investors to establish private universities.

In May, you announced that you will open your doors to receive offers to establish private and national universities. Are there any offers the ministry is currently examining?

Yes, there are 10 offers that the ministry received and is currently looking into within the framework of expanding in the establishment of universities, whether public or private, in different geographic areas.

There is a presidential decision to establish three private universities; however, until now, they are not completed.

Universities like Suez Canal, Assiut, Beni Suef, and Benha have submitted offers to establish national universities. The offers were looked into and approved by the Council of Private and National Universities. The procedures to complete the construction works are continuing.

The 57357 Foundation has also submitted an offer to establish a national university for medical sciences and technology. Examining the construction file is underway.

We aim to increase the admission rate of students coming from Arab and African countries by 10% annually in order to restore Egypt’s leadership.

Those who are concerned with education and its development say that it is necessary to expand in university technical education to meet the needs of the market. What is your opinion about that?

The ministry aims to expand the establishment of government and national higher education institutions in the governorates that need them the most. It also aims to transform 45 technical institutes affiliated to technological colleges into specialised technical colleges based on the needs of the market with a four-year educational system to provide high technical certificates.

The ministry has a plan to expand the establishment of the community’s technical colleges to accommodate larger numbers of technical education students as well as better education in order to eventually meet the needs of the labour market.

What about old universities, such as Cairo and Ain Shams. Will they be approved to open new branches?

We seek to reduce the density and increase the quality of the educational process and to accommodate and provide more educational opportunities.

There are current preparations for the establishment of five community universities to enroll 20,000 students at appropriate tuition fees or middle classes, like the new programmes in universities. The government will retain an appropriate percentage of stocks and channel the revenues to spend on free institutions.

The ministry’s strategy is to encourage the establishment of private investment universities, provided that the government supervises and organises the activities of universities to ensure the quality of the educational process.

The ministry also plans to link university admission systems with a balance between students’ abilities and the nature of study programmes and courses.

Want to know the ministry’s plan for foreign missions?

The ministry aims to double the number of foreign missions in rare specialties and increase grants and joint projects with development partners, as well as completing the accreditation of 50% of education and scientific institutions.

The ministry sponsors students who excel in sport so that participants in the national and international sports competitions increase by 25%. We are also working to take the necessary measures to improve the ranking of higher education and scientific research institutions.

We have special interest in the care of disadvantaged students in education from poor families and remote areas by exempting them from tuition fees based on the case study and directing the budgets for the care of students to purchase educational supplies and grant them free of charge to eligible students and to give financial and in-kind support to deserving students according to the nature of each case. Priority will also be given to them for staying at the dorms.

The government is also seeking to increase the support allocated to educational and research facilities in universities to suit the needs of people with special needs, expand in twinning between the Egyptian and specialised and advanced international universities with the aim of continuing to upgrade the system of university education and linking it to the developed world.

What are the areas of focus of the ministry during the coming period?

According to the Sustainable Development Plan 2030, the ministry will focus on seven major sectors in scientific research, such as energy, water, agriculture, and food, development of border regions of Egypt, international cooperation, infrastructure and capacity building, science, and society.

There is an increase in the number of foreign envoys during the past four years, especially in Japan, Britain, France, America, and Germany to obtain post-graduate university degrees in several scientific majors, including new and renewable energy, nuclear power, water desalination, agriculture, and engineering.

How many scientific missions have been abroad during the past year?

The total number of missions until last fiscal year amounted to 371 missions consisting of 950 students at a cost of EGP 691mn. This was adopted by the Executive Foreign Missions Committee, which relied on the competitive system to meet the needs of universities and research centres.

The ministry is keen to link the mechanisms of education and scientific research to the industry through cooperation with the Ministry of Industry and the Federation of Egyptian Industries (FEI). The ministry is also keen to work on the issuance of new legislation to provide more incentives to investors to support scientific research with unconventional sources of funding.

There is great interest in encouraging entrepreneurship and small projects to transform innovation and creativity into economically feasible projects and to develop the curricula of agricultural faculties to attract students to join them and encourage them to invest in the 1.5-million-feddan project.

We are already reaping the fruits of linking scientific research to industry through meeting the needs of society and deepening local industrialisation and market scientific research in several fields, including petroleum, alloys, vaccines, water desalination, new energy, fertilisers, petrochemicals, and food.

A technological incubator has been established with 15 departments covering most majors. We are also working to complete the network of technology transfer offices in universities and research centres and institutions to reach 40 offices so far with funding of EGP 25mn.

Has the ministry contributed to the financing of technological alliances during the last period?

The Ministry contributed to the funding of 12 alliances to deepen local industrialisation in several fields, including desalination of water, medicine, electronics, petrochemicals, new energy, and satellites with total funding of EGP 112mn.

Moreover, 12 technological startups have been registered in this alliance. The ministry seeks to boost the number to 50 companies by the end of the coming fiscal year, next to applying technologies that disperse oil patches in the Suez Canal.

What is the ministry’s plan to develop university hospitals?

The budget of university hospitals for the last fiscal year amounted to EGP 7.9bn, up by EGP 1.1bn (a 16.4% increase). The ministry aims to boost the budget to EGP 9.9bn in the current fiscal year.

Furthermore, four university hospitals have been established and prepared and are ready to be inaugurated at a cost of EGP 1.5bn. This includes the National Liver Institute Hospital at Menoufia University, Kafr El Sheikh University Hospitals, Al Rajhi Hospital in Assiut, and the New Children’s Hospital at Ain Shams University.

These hospitals operate on a service basis of 16 million patients—both Egyptians and foreigners—per year. This accounts for 69% of the total medical service in Egypt.

The total number of workers in these hospitals amount to 16,800 staff members, 6,987 assistant professors, and 4,291 resident doctors. They also include 28,900 beds for patients and 3,500 intensive care beds.

What about receiving accreditation from the National Authority to ensure the quality of education and accreditation?

The number of government faculties that obtained accreditation increased from 46 in 2016 to 87 in 2017, up by 89.1%. This came at a cost of EGP 800mn. We are now also working to accredit 21 new faculties to reach 95 accredited faculties.

Will the rank of Egypt improve the quality of education and scientific research during the coming period?

Egypt during the last period has remained within the 36 best countries, among 231, in terms of international scientific publishing. We produced 48,300 research papers in the past three years.

Egypt also won the chairmanship for two years of the Association for the Development of Education in Africa at the end of 2015. This is a subsidiary of the African Development Bank.

We also won the chairmanship of the Office of Education, Science, and Technology of the African Union Commission at the end of 2015 until 2017. This is the body responsible for planning scientific research at the level of the countries of the continent.