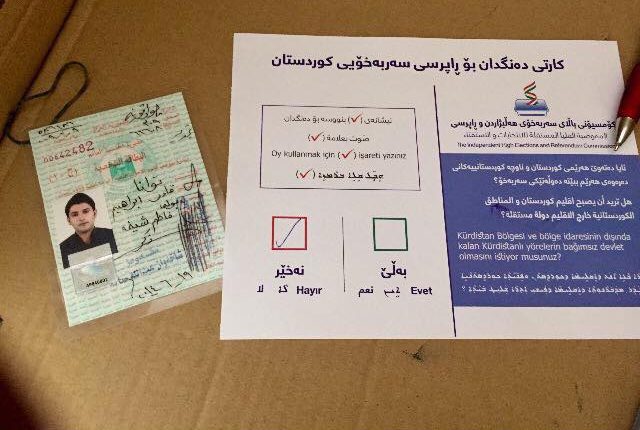 Thousands of Kurds casted their votes on Monday in a referendum aimed at separating Iraqi Kurdistan from Iraq. According to the Kurdistan government, there were 12,000 polling stations, including in disputed areas.

In a press conference Monday, Prime Minister of the Kurdistan Region Nechirvan Barzani said, “The referendum is not a threat to Turkey or any neighbouring countries, and it is a peaceful and democratic process.”

But in light of previous international and regional opposition to the referendum, Turkish President Recep Tayyip Erdoğan warned on Monday that his country might take a military action in Northern Iraq if the referendum resulted in threatening Turkey. He also announced closing the crossings to prevent Kurdistan from exporting oil.

On Sunday, Iraqi Prime Minister Haider Al-Abadi demanded the government of Kurdistan to hand the international border points, and airports, over to the central government. He also called on the foreign countries to halt importing the Kurdish oil and dealing exclusively with the Iraqi government regarding border crossings and oil.

After casting his vote, President of Iraqi Kurdistan Region Massoud Barzani told reporters that he hoped for the dispute between Erbil and the central government in Baghdad to resolved peacefully through dialogue, Kurdish media reported.

Despite that the Change Movement (Gorran) general-coordinator Omar Said Ali has voted “Yes” in the referendum, Shirwan Braim Khwaz, the member of the presidential council of the Gorran movement, told Daily News Egypt on Monday that he boycotted the referendum.

Khwaz had earlier argued that the referendum was unconstitutional because it was not agreed on by the Kurdistan Parliament and didn’t represent the decision of the Kurdish people, but rather Barzani’s party.

Similarly, Beshro Khoshnaw, a Kurdish teacher, told Daily News Egypt that he doesn’t agree with the timing of the referendum, which in his opinion “only serves the interests of Barzani’s party.” Yet, Khoshnaw said he voted yes to the “dream of all the Kurds to have their independent state.”