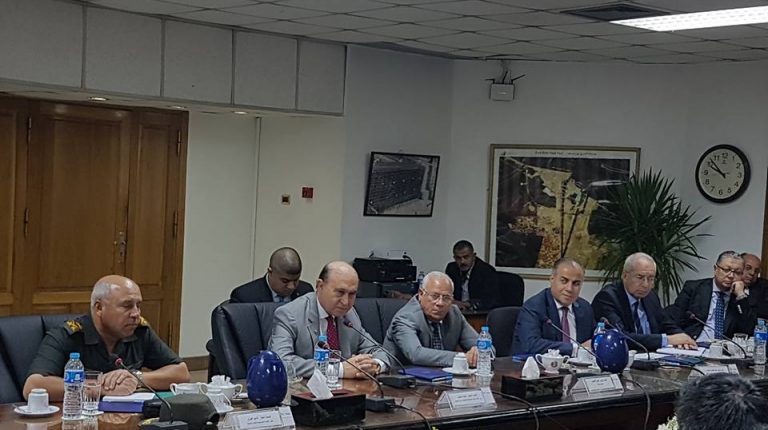 Chairperson of the General Authority for the Suez Canal Economic Zone (SCZone), Mohab Mamish, received a delegation from the Singapore Port which is visiting Port Said to discuss the developments of operating the new East Port Said Port.

The meeting was attended by Head of the Engineering Authority of the Armed Forces Kamel Al-Wazir; Port Said Governor Adel Ghadban; Vice President of the SCZone for the Northern Region Abdel Qader Darwish; Assistant Head of the Engineering Authority for the Armed Forces Hassan Afifi; President Assistant of SCZone Ehab Al Banan; and a number of the SCZone’s officials.

Mamish stressed that the Egyptian political leadership pushes for more cooperation with the Singaporean side, particularly in the East Port Said’s development zone, pointing out that Singapore Port will contribute significantly to the success of East Port Said Port.

He revealed that the Egyptian and Singaporean sides have agreed to form a joint technical committee in the coming period to follow up the developments of the project. Joint workshops will begin following the Singapore Port’s officials’ visit in Egypt, Mamish added.

Abdel Qader Darwish gave a presentation on the East Port Said, which will start operating by June 2018. He also talked about the size of works that will be accomplished in the port as well as the industrial and logistic zones.

The head of the consulting bureau of the project, Ashraf Wagih, also gave a presentation on the road and tunnel network serving the East Port Said’s development zone. He pointed out that the implementation rate in the road network of the industrial zone amounted to 52%. There are approximately 10 local Egyptian companies operating in the East Port Said, with about 85-99% of the project completed. Wagih noted that about 2 km of East Port Said’s berth will be completed by the end of October, while the remaining 3 km will be completed by December.