The recent review of the IMF on Egypt’s economy said the biggest economy in North Africa is capable of repaying the fund, but risks remain.

The review said that risks to the programme are arising from the still fragile macroeconomy and a stiff reform agenda in a country where nearly half of the population lives near the poverty line.

“By the end of the arrangement in 2018/19, the fund’s outstanding credit as a share of gross reserves is projected to peak at 39%, after which it is expected to decline,” the review said.

“Debt service to the fund as a ratio of exports of goods and services would reach 0.5% in the same year. The Central Bank of Egypt (CBE) and the Ministry of Finance signed a memorandum of understanding (MoU) on respective responsibilities for servicing the fund credit to ensure uninterrupted repayments,” the review explained. 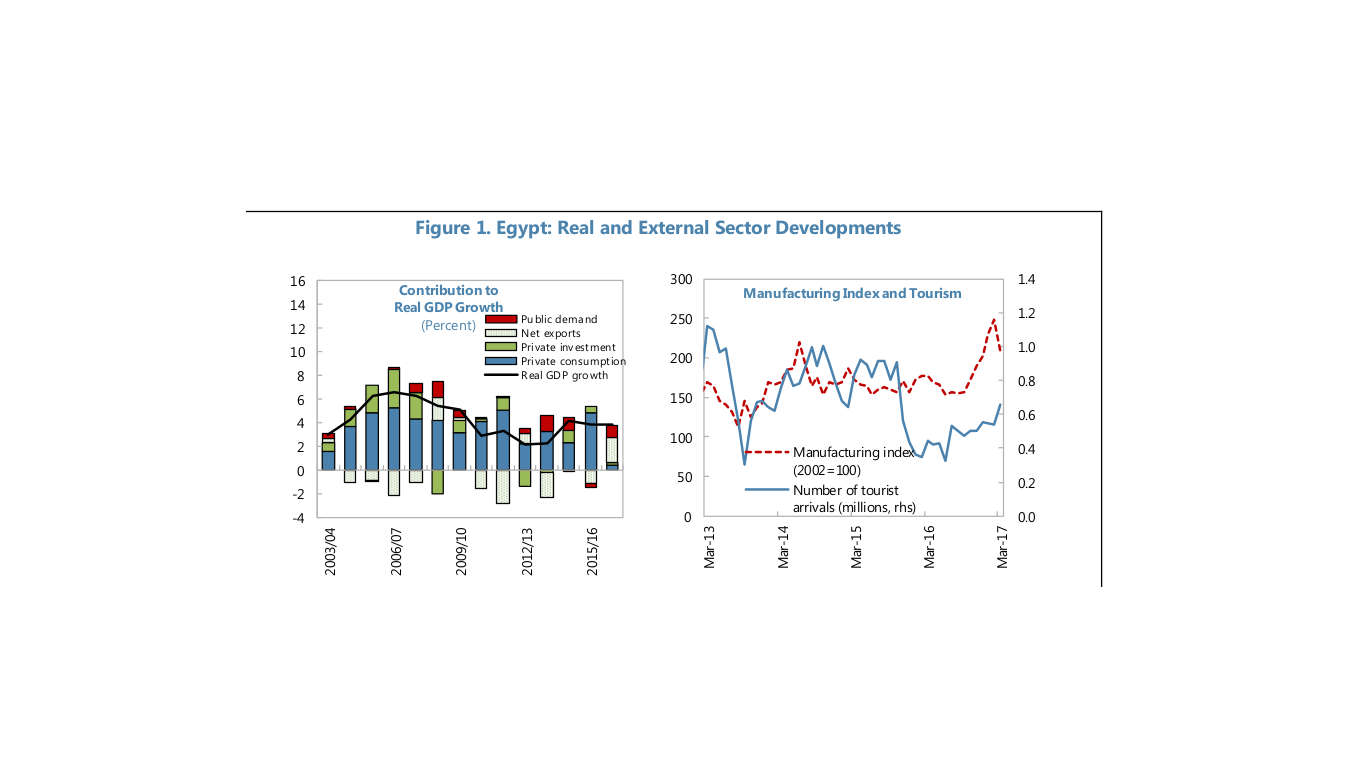 The IMF also noted that programme’s objectives remain achievable, but the path has changed due to a more depreciated exchange rate than expected. While the weaker pound helps the external sector, it led to higher energy subsidies and undermined fiscal consolidation.

It noted that an adjusted path of fiscal adjustment is adequate to keep the programme on track.

The top priority of the government according to the review is to bring inflation under firm control.

“Depreciation has fed inflation, causing headline rates to rise above 30%. After some delay, the CBE took vigorous monetary policy actions to contain demand and anchor inflationary expectations by increasing policy interest rates significantly and tightening liquidity. Continued fiscal adjustment will also be important to remove the root cause of high inflation in Egypt over the last decade,” the review explained.

On the other hand, the review noted that energy subsidy reforms remain critical but delayed. 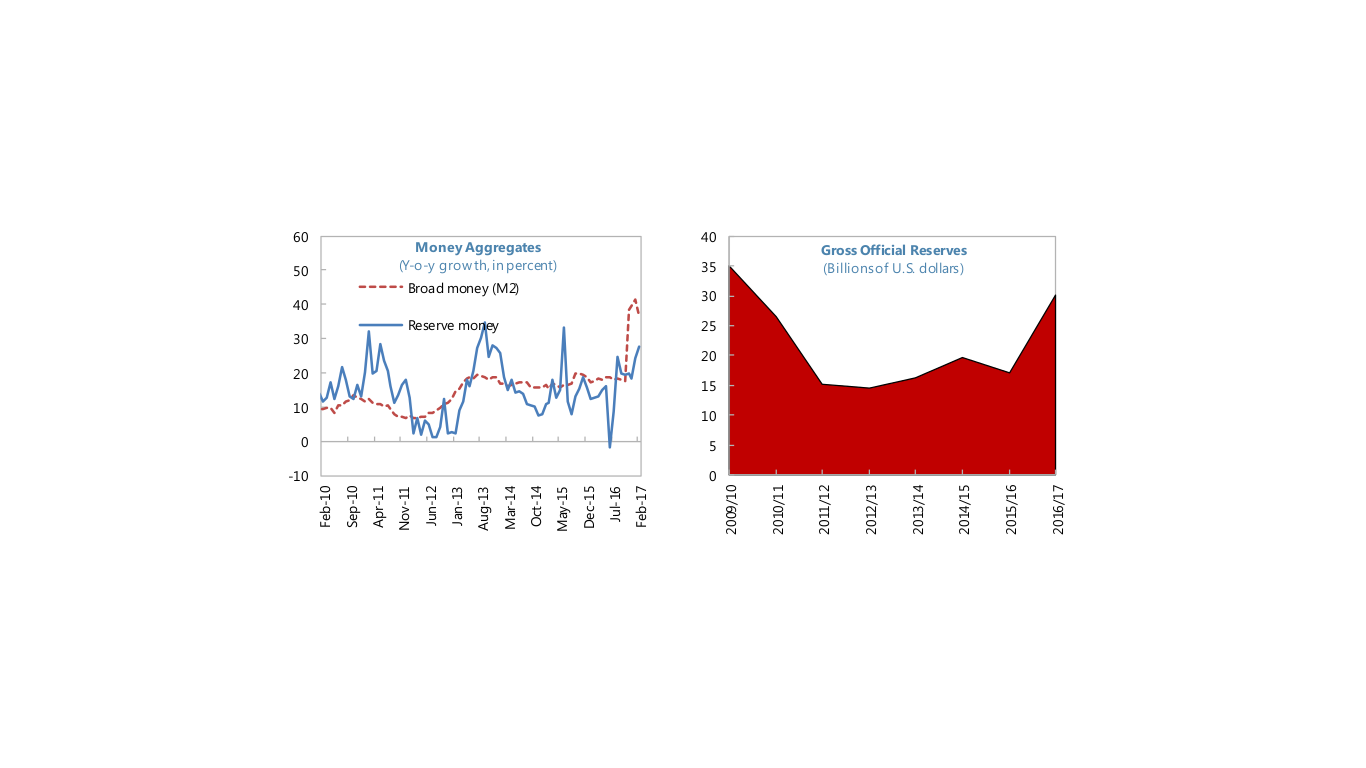 Annual increases in electricity tariffs and two significant fuel price increases in November 2016 and June 2017 were critical steps towards achieving cost recovery. However, because of depreciation, the fuel price increases have been barely enough to contain the fuel subsidy bill as a share of GDP and to increase price-to-cost ratios compared to pre-programme levels.

The commitment to eliminate subsidies on most fuel products by June 2019 is encouraging, but the plan to pause until 2018/19 before another significant increase carries a risk of slippage related to global oil prices and the exchange rate.

“Staff would have preferred earlier periodic price increases; and, in this respect, it welcomes the authorities’ intention to introduce an automatic fuel price adjustment mechanism and the commitment to adjust fuel prices or take other measures as needed to offset any larger-than-projected costs of fuel production,” the review noted.

It also said that Egypt has an enormous potential to become a major producer and a supplier of natural gas.

from 7 billion cubic feet (bcf) in 2010 to about 4 bcf in 2015/16. However, several new fields have been developed in the Nile Delta and Egypt’s territorial waters in the Mediterranean in recent years, of which the Zohr field is the most promising.

“The government signed 76 new upstream exploration agreements with investment commitments in excess of $15bn. In addition, several other key projects have been accelerated to enhance current production earlier than planned. As such, gas production has increased during 2016/17 for the first time in years and is set to reach 4.5 bcf by June 2017. Over the next three years, gas production from these fields is projected to increase to 7.7 bcf per day, which exceeds Egypt’s domestic need (currently 5.2 bcf per day) and offers an excellent opportunity to save excess quantities for future generations and/or export gas to other countries in the region and elsewhere.” 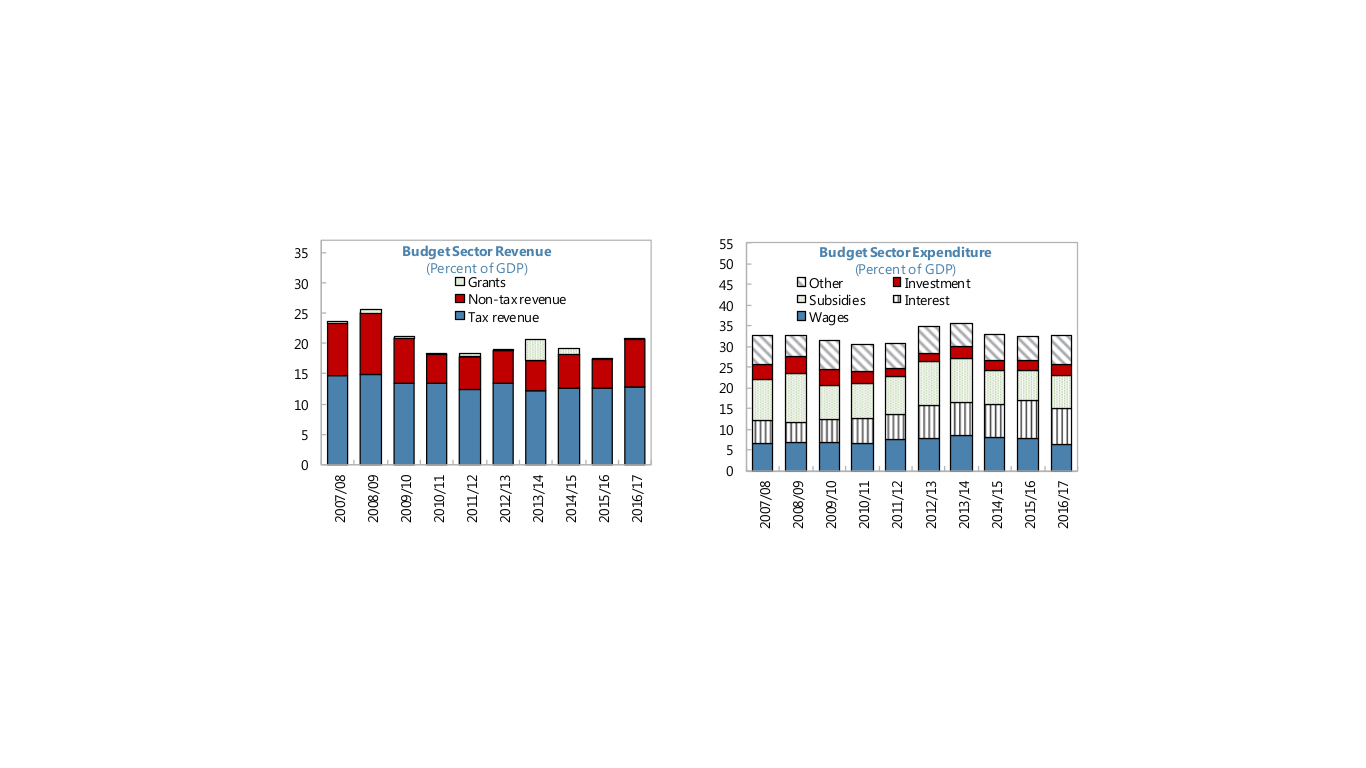 Moreover, the ongoing offshore explorations suggest that a presence of even larger deposits of gas is highly likely, which, once confirmed, will further boost Egypt’s gas potential.

For Egypt’s banking system, the review noted that it has weathered well the transition to a floating exchange rate regime. The Egyptian pound’s depreciation and a higher interest rate have had a moderate impact on banks’ capital adequacy, asset quality, profitability, and liquidity.

The banking system recorded aggregate profits of EGP 62bn in 2016, which cushioned the impact of the exchange rate devaluation on banks’ capital.

Based on March 2017 data, the average capital adequacy ratio stood at 14.9%, well above the Basel-recommended floor of 8.625% and the CBE-mandated 11.25%. Return on equity is at a healthy 24.4%, and the share of non-performing loans in total loans remained stable at 5.7%. Moreover, specific loan-loss provisioning coverage is 91.5%. Net open FX positions are very small, limiting the impact of currency risk.

The review also highlighted that the main factor driving the increase in debt stock in 2016/17 is the larger-than-anticipated depreciation in the exchange rate. Revaluation of foreign-exchange denominated debt and the success of the authorities in raising foreign financing have both resulted in an increase in foreign debt from 13% of GDP in 2015/16to 22% this year. 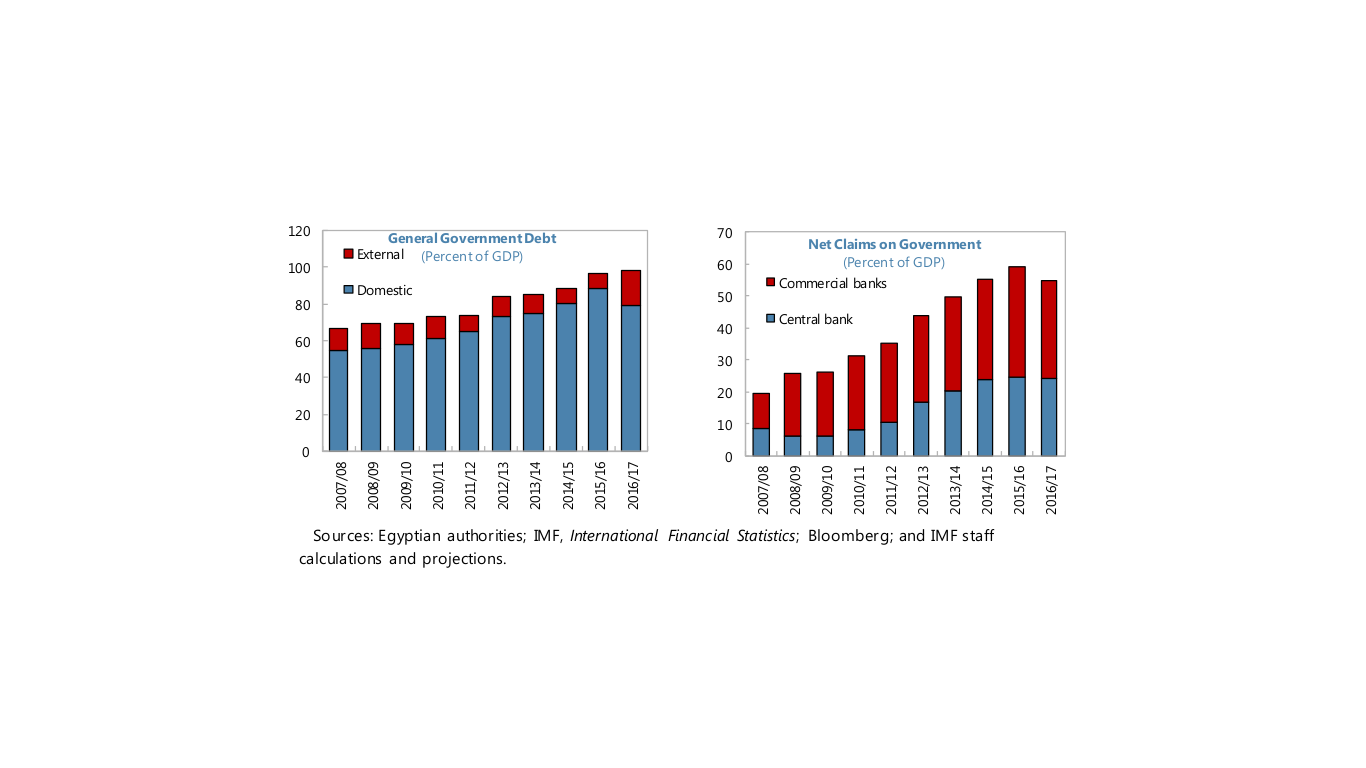 “Over the medium-term, the baseline scenario implies a considerable reduction in debt as a share of GDP. This is underpinned by the following assumptions: real GDP growth is forecast to increase from 3.5% in 2016/17 to 6% over the medium term. The growth recovery is driven by rising investments and exports. Export recovery is based on increasing competitiveness resulting from the free flotation of the exchange rate and structural reforms that reduce the cost of doing business. The investment boost is based on public investment in social and economic infrastructure, private sector investment due to the weaker exchange rate, large investments in the energy sector, and discovery of a major gas field.”

The primary balance of the general government is projected to switch from deficits to surpluses from 2017/18.

These projections are based on the programme, which includes considerable revenue and expenditure measures.

The baseline projections are ambitious, with risks on the downside. Egypt’s forecasts for growth, primary balance, and inflation tend to be optimistic. Forecast errors are generally within the benchmark, but the median forecast error for all three indicators highlight the economic and policy-related risks to the programme.

The projected fiscal adjustment in the cyclically adjusted primary balance is large by comparison to the benchmark countries.