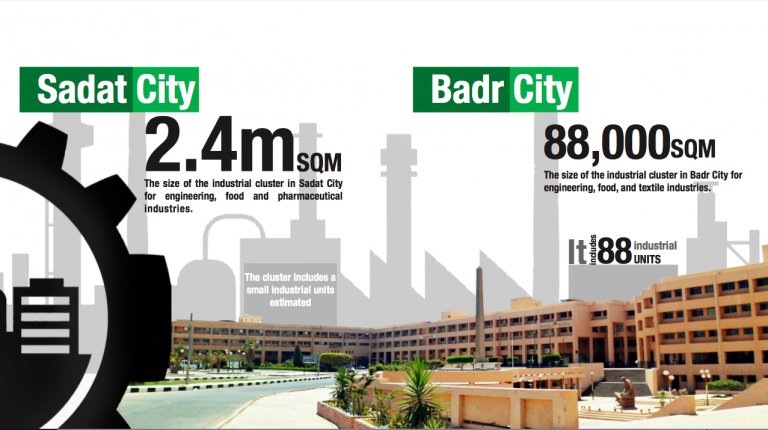 Egyptian investors said that the rise in prices of industrial land in Egypt as compared to abroad is one of the obstacles to investment in the time that the Egyptian government seeks to encourage the investment climate and prepare it for Arab and foreign investors.

Meanwhile, small and medium-sized enterprises (SMEs) in Egypt suffer from the high cost of land available for industrial projects.

Furthermore, there are some economic reform measurements the government has taken recently, which have increased the burdens on the investor, especially increasing utilities’ cost, such as water and electricity, as well as an increase in oil prices. Besides, the liberalisation of the exchange rate of the Egyptian pound will represent a great challenge to the junior investor and manufacturer.

Above all, lake of suitable industrial lands are eligible for building factories and plants, therefore, the available lands are offered in high prices.

In this regard, Minister of Trade and Industry Tarek Kabil confessed that Egypt needs for one or more qualified industrial city, adding that the ministry is working on this issue.

The number of industrial developer zones in Egypt is about 12 zones, which are developed by 9 companies with Egyptian and foreign investments, in the areas of 10th of Ramadan, 6th of October, Sharqiya, Sadat and Burj Al Arab, according to data of the Industrial Development Authority (IDA).

Minister Kabil said in a press statement that, since 2007 until 2015, 9.5 million sqm of industrial lands had been offered. Since the beginning of 2016, 16 million sqm have been offered, announcing that 15 million sqm will be offered in the current year.

Kabil added that there is a great demand for industrial lands, noting that the ministry seeks to meet the needs of developers and investors.

“There is no country that can attract foreign investments unless it promotes local ones,” said Yasser Quora, a member of the coalition’s committee and leader in the National Movement Party.

Quora said the country is supposed to be committed to conditions announced in public draws.

On 14 December, Kabil launched the initiative of “Your Factory is Ready to License” for the first time in Egypt to offer 296 plots of land for establishing factories that would be fully connected with utilities and services in small and medium industries in Sadat City.

The conditions booklets were offered on 19 December and determined three business sectors for the factories, which are pharmaceuticals, engineering, and food.

After obtaining the factory, the investor is not entitled to transfer or change his activities. The new cluster on a total area of 300,000 sqm, 40%  of the area of the cluster are services, roads, and green spaces at an investment cost of EGP 510m.

The remaining 75% of the total value of the plant will be paid via several methods of payment through self-financing in four quarterly instalments from the date of receipt of the land in addition to the interest rate according to the regulations in force of the Industrial Development Authority (IDA), or payment through bank financing with a decreasing interest rate of 5% to ten years. Unit prices start at EGP 1.4m up to EGP 2.9m.

Quora said that the down payment of booking factories in Sadat City is estimated at 5% of the total amount of the factory to prove seriousness.

He added that the investors entered the public draw, and the winners were surprised when they realised the down payment they will be paying increased by 40%, which is a new obstacle for investors and puts them in a dilemma after the preparation of feasibility studies according to down payments before the increase.

Quora stressed that some ministries insist on violating the decisions of the President Abdel Fattah Al-Sisi and wasting investment opportunities for the state.

He pointed out that after conducting the draw in March, the investors went to pay the rest of the amount of 25% down payment. They found the 40% increase in down payment without any reason or announcement.

Qoura noted that this increase in the down payment came after the liberalisation of the exchange rate of the Egyptian pound and there were no economic changes happened to raise this serve increase.

Meanwhile, in an interview with Daily News Egypt, Kabil said the ministry has provided the investor with a booklet of conditions and the investor applies for acquiring the factory according to the booklet. If they do not like the conditions in the first place, they do not accept it.

Commenting on the statement by the head of Industrial Development Authority (IDA), Ahmed Abdel Razik, regarding the increase that utilities, such as water and electricity, raised the cost of connecting lands with them. Qoura pointed out that the increase is higher than services cost.

“Some investors had to buy their properties to complete the amount of down payment,” he added. “The country does not have to change the procedures and conditions of booking lands in the industrial cluster, as the state agencies loses their trust by such actions.”

He believes some investors will withdraw their applications on the lands in Sadat City.

He called the minister to reconsider the decision to increase the amount of down payment to 40%.

From his part, the head of the IDA said the authority is communicating with investors on this matter to resolve the crisis.

He added that the investors will raise lawsuits at the Administrative Court, accusing the ministry and the IDA of not committing to the draw conditions.

“The decision of the IDA to raise the unit prices was a result of increased costs of carrying out the factories after the Central Bank of Egypt’s decision to float the pound in November and the application of the VAT,” said Abdel Razik. “The IDA is a non-profit organisation that does not receive any additional amounts from the value of the units. Furthermore, the Engineering Authority of the Armed Forces builds the factories and does not make profit from so. This is the real increase in cost of the units of the cluster.”

The IDA head affirmed that the VAT and high prices after the liberalisation of the exchange rate were not taken into account before setting the initial prices for units (the prices mentioned in the conditions booklet were preliminary).

Meanwhile, the head of Badr City’s Businessmen Association, Bahaa El-Adly confirmed that the association didn’t receive any complaints regarding the increases in the down payment of industrial cluster’s lands.

Regarding the problems that faces the Badr’s investors, El-Adly noted that since the establishment of Badr industrial city there are problems in the electricity network in the city and there is a problem between the ministries of housing and electricity on the cost of the amendment of the electricity system.

He pointed out that easing the procedures and facilitating issuing licences for the establishment of industrial facilities and offering land contribute to reducing the cost of the final product, because it reduces the time in the construction process.

It is worth mentioning that Kabil handed over contracts for the first phase of new land in Sadat City’s cluster.

The minister noted that this industrial cluster, which consists of 296 units, will be delivered during the September to be the first cluster equipped with licences before those of Badr City and Port Said.