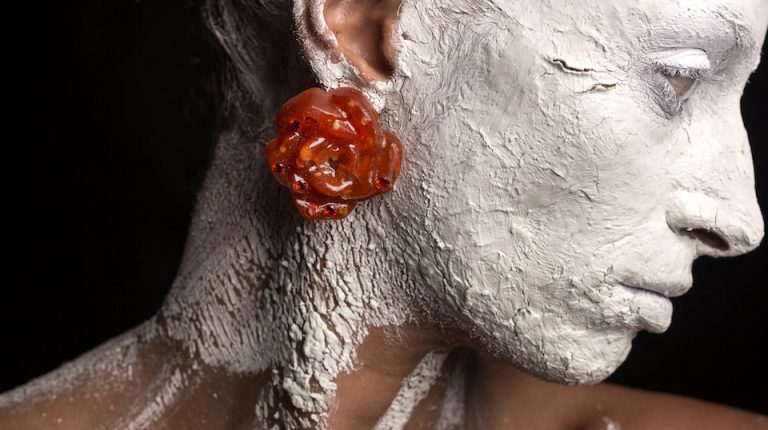 Sitting in her regular corner, she might come out as a manifestation of a long-gone era. While her short hair sways reluctantly in co-ordinance with the day’s hot wind, her vintage polka dot dress refuses to stand still. As she slowly sips her coffee, her jewellery shimmers under the sun and a certain ring fights to attract as much attention as possible.

Her finger circles around the handle of her white cup; simultaneously, the ring tilts to reveal a statement pearl enclosed by a sea-shell painted in faint red. As the day’s rays of sun dance around the surrounding trees, the ring sends back flickers of light courtesy of its hidden transparent stones.

Menna Khalil is an extraordinary jewellery designer that often finds herself going against tides. After few successful collections that embraced the most unexpected topics, the designer was determined to tackle a controversial subject with her jewellery.

“Almost two years ago, I had the idea of creating a feminist collection. When I started taking my friends’ opinion; some were quite excited such as Mona El-Tahawy and Nawal El-Saadawy. Yet, sadly many advised me not to pursue this idea.” Khalil added as she put her cup on the table “Even though they believed in the cause, they were concerned that it would backfire.”

While Khalil has always addressed her designs as souvenirs from her personal experiences, she was determined despite the general feedback to create a collection that would represent both her personality and the women she plans to dress. “Voice of Anonymous Women” is a 12 piece collection that covers many topics often deemed as taboos; including rape, domestic violence, and circumcision.

“The collection’s name is inspired by the numerous painful stories that I have heard during my research. I have spoken with rape victims that still cannot tell their parents; meanwhile, I have heard from others about how circumcision has ruined their marriages. On the other hand, after many conversations, I was shocked to find out that domestic abuse and rape are more common than I could have ever imagined,” said the designer.

After a one-year hiatus, Khalil started researching the topic aiming to trace the problem back to ancient history, universal culture and religion. According to her, statistics were the first surprise before she dived into the hidden meanings behind several daily symbols.

“The key of life is a popular Pharaonic emblem; however, many do not know its significance. In fact, it stands for the uterus and the two ovaries as well as the vaginal canal, where the baby comes out to life. Can you even believe how sacred the reproductive system of a woman in all cultures and religions is?” questioned Khalil.

According to the designer, the fact that the same reproductive system is currently stigmatized demeaning by modern culture is one of the main reasons her collection was absolutely required.

Furthermore, her extensive research has also led to few other findings that have been buried with contemporary stereotypes. The fish, which is quite evident in the collection, was a symbol that Khalil borrowed from the legend of Isis and Osiris.

According to the old tale, when the latter was chopped and scattered across the country, Isis managed to find his body parts, to help him get ready for the afterlife, except for one; his private organ, which was eaten by a fish. Therefore, the marine creature was used during the Pharaonic era to symbolize fertility. On the other hand, she depended on pearls as a subtle metaphor for virginity.

“Under the overall umbrella, I had a series of related topics. First, I started with circumcision. One of the main pieces in this collection is the red flower earrings. I moulded red resin, to symbolize virginity, around a real sharp razor blade. Furthermore, I have added small stones such as red and orange zircon to make it shimmer,” said the designer as she took off her earring to explain the techniques invested in it.

Given the designer’s first encounter with resin, the intricate pair of earrings took two weeks of watching multiple Youtube tutorials and few trial and error attempts as she turned her room into a jewellery workshop to bring this collection to daylight.

After mastering the techniques of resin, she was also facing a challenge to master a design that can stand for physical abuse and rape.

The designer moulded the resin to create an abstract human face then, using syringes, she injected colours until it came out as a bruised face covered with shiny triangles of aluminium to indicate the woman’s triumph as a violence survivor.