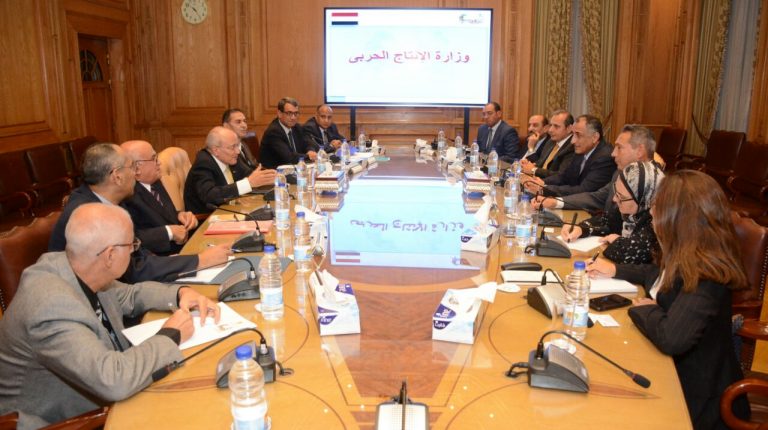 During the meeting, held at the headquarters of the Ministry of Military Production, Al-Assar reviewed the production capabilities of the ministry’s companies, as well as its human resources, along with the financial indicators during the last five years, which showed a rise.

Al-Assar stressed the policy pursued by the ministry, which aims, in all its contracts with foreign companies, to deepen local industrialisation and ownership of production technology and knowledge and the establishment of research and development centres.

He pointed out that the plan of the ministry during the coming period focuses on increasing the exploitation of available capacities. This would come through the implementation of major national projects that require the provision of large financial funding and developing existing production lines to meet the demands of the market, he added.

Al-Assar revealed a number of these projects, where Egyptian banks can play a role in implementing through funding.

Amer said that public banks are serving as the locomotive for local development and manufacturing to take advantage of the monetary reforms and the large growth potential of the Egyptian market.

He added that the partnership between the Ministry of Military Production and the banks on the one hand and advanced technology on the other is expected to result in maximising real local industrialisation, aiming to transform the Egyptian economy into an export economy. “This is the hope for sustainable development, financial stability and protection of the economy from shocks,” he argued.

During the meeting, the two sides agreed to form a committee of the two parties to meet periodically to study the method of implementing the projects that are agreed to be established.