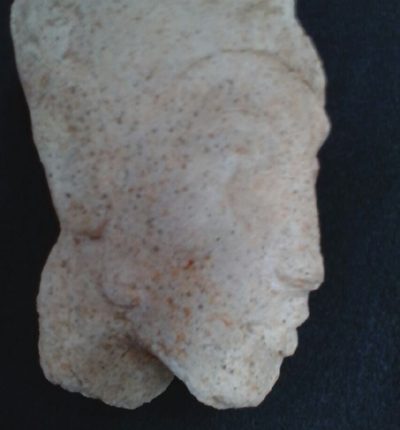 A gypsum head of a statue of king King Akhenaten was unearthed on the hands of a British- Egyptian archaeological mission in Tel El-Amarna in Minya governorate, according to Ministry of Antiquities’ official Facebook page.

The head was found in the first hall of the Great Atun Temple in Tel El-Amarna. The mission headed by archaeologist Barry Kemp has been excavating several locations in Minya governorate since 1977.  The white head is 9cm tall, 13.5 cm long and 8 cm wide.

Mostafa Waziri, the secretary-general of the Supreme Council of Antiquities assured that the importance of the discovery does not only lie in the fact that it displays one of Egypt’s most important kings, but also in revealing the secrets of the city that was Egypt’s capital during King Akhenaten’s ruling era.

The mission will keep the excavation work in the area aiming to unearth more of the hidden secrets of the place.

Tel El-Amarna is located 60 kilometres away from Minya. It’s considered a cave of Egypt’s most precious ancient ruins. It was established during the reign of King Akhenaten to call for his new religion. That makes it one of the richest places with his belongings.

Is Nefertiti hiding in the Valley of Kings’ secret chambers?

Akhenaten to take the Pharaohs to Broadway