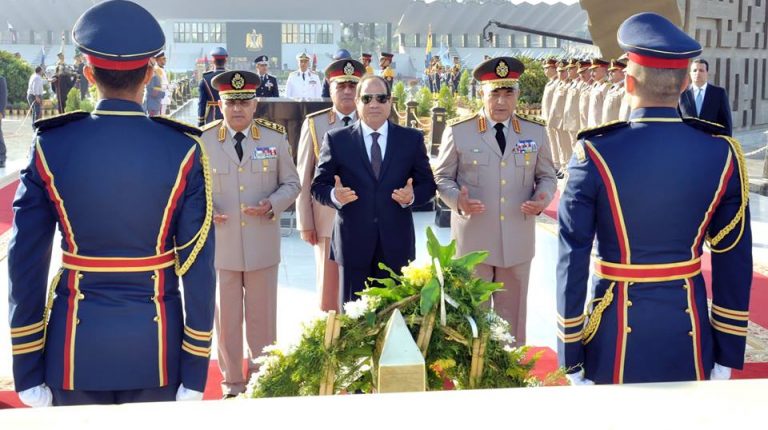 Three alleged militants were arrested in central Sinai by the armed forces on Friday as Egypt celebrated the 44th anniversary of the October War, which led to the takeover of the Egyptian army of the peninsula in 1973.

In Cairo, state officials celebrated the anniversary of the battle, which many claim to have changed the course of history in the Middle East and the Arab-Israeli conflict.

The armed forces and the Egyptian air force staged an air show in commemoration of the battle, which is said to have depended heavily on air strikes. The anniversary is the national holiday for Egyptians and is seen by many nationalists as the return of the pride of the Arab military after several defeats against the Israeli army.

The October War battle allowed the Egyptian forces to pass the Suez Canal into the eastern bank before a ceasefire was announced by the conflicting sides and the UN, giving way for diplomatic negotiations that ended with the 1978 Camp David Accord. This led to the withdrawal of Israeli forces from Sinai since the Six Day War in June 1967. President Al-Sadat and Israeli Prime Minister Menachem Begin received the Noble Peace Prize as result.

However, the accord was heavily criticised by nationalist Nasserist personnel and pro-Palestinian activists, who accused Al-Sadat of nationalising with whom they saw as enemies.

In October 1981, while celebrating the anniversary of the war, radical Islamists assassinated Al-Sadat during a military parade.

However, Sinai has remained a source of trouble for the Egyptian state as the absence of official institutions and civilian bodies were one of the reasons of the rise of Islamist militancy.

Operations in Sinai continue to quell the insurgency, which reached a peak after the ouster of former President Mohamed Morsi. The army and police are waging a severe crackdown on militants since 2013, leading to guerrilla warfare that killed hundreds of security personnel and civilians.

In most of its speeches and plans, the Egyptian government has planned to implement policies of development and facilitating civilian affairs in the area, a request that is often demanded by civilians in the region. Egyptian security forces have implemented a buffer zone between Rafah partition in Egypt and the border with the Gaza Strip.