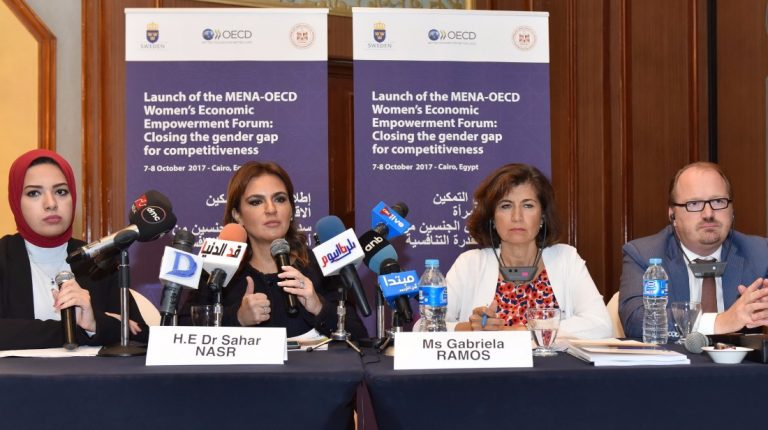 Minister of Investment and International Cooperation Sahar Nasr stressed the need for women’s economic empowerment, as it will lead to an increase of about 26% in the world economy.

This came during the launch of the MENA-OECD Women’s Economic Empowerment Forum under the slogan “closing the gender gap to promote competitiveness”.

She added that by increasing private sector participation and concerted efforts on the regional dimension, the unemployment rate of women in the region will fall to about 20%.

She added that the launch of the forum comes at the right time, as it keeps pace with the early announcement of President Abdel Fattah Al-Sisi that 2017 is the year of the woman.

The minister pointed out that all groups are currently benefitting from the economic reform programme, which is not limited to economic measures, but also includes a social protection package to girls or women from the neediest governorates.

“The ministry is keen to move faster in the coming period to make women have the right to participate in their country’s economy and contribute to its productivity,” Nasr said in the forum’s press conference.

The minister allocated 50% of grants of SMEs to the neediest women.

On the other hand, only 24% of women in the Middle East and North Africa (MENA) region are employed compared to 60% in the Organization for Economic Co-operation and Development (OECD), said the organisation’s chairperson, Gabriella Ramos.

It is estimated that raising women’s participation in the labour force to the same level as men could boost the global GDP by $12tr or 26% by 2050, according to the OECD.