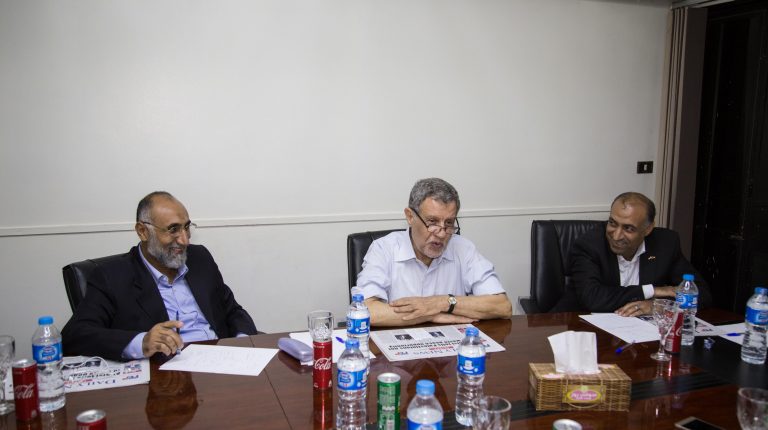 Hopes for an often failed Palestinian reconciliation revived. As talks resume in Cairo, Fatah and Hamas are strongly compelled to sort their conflicts and abide by the Egyptian vision to find a way out of a crisis that is about to blow up in every one’s face.

Regional conflicts catastrophised by terrorism and political division, a drastic situation in the Gaza Strip and the fading of talks on the two-state solution between Palestine and Israel indicate that national reconciliation shouldn’t be overlooked.

The announcement of agreements reached between Fatah and Hamas are already celebrated. Hamas is retreating under Egyptian command. But the process remains still in the very beginning and will proceed step by step amid pressing but delicate issues.

There is general optimism that the ongoing reconciliation process is different this time. This is not the result of Palestinian factions’ desire to come together but rather a determined Egyptian action. In a recent interview, President Mahmoud Abbas insisted that no foreign interference with Palestinian affairs would be tolerates, except for the Egyptian role.

Egypt didn’t present itself this time as a mere sponsor of talks, it will be the policy maker. “The presence of Director of the General Intelligence Service during the recent cabinet meeting in Gaza, echoing President Abdel Fattah Al-Sisi’s message aimed at stating that Gaza is under Egyptian sovereignty and protection,” said Mohamed Abu Samra.

Samra, chairman of the Islamic National Movement in Palestine and Al-Quds Centre for Studies, said that hee believes that Egypt wants to have a stronghold before negotiating with Israel, in a seminar hosted by Daily News Egypt days after the first entry of the Palestinian Authority to Gaza since 2014 on Tuesday.

Egypt’s changed strategy was notably translated in its attitude towards Hamas. It removed the organisation from its terrorist list and invited over officials, whom in turn, were given a space in pro-state Egyptian media.

The protection of Egypt’s national security was the reason for both previous crackdown and current collaboration with Hamas in Gaza.

“The new approach focuses on the Gaza Strip and how to change public perception of Hamas and that area of Palestine, especially that Egypt doesn’t want more terrorism produced,” said Fatah member and political analyst Ayman Rigib.

Egypt’s presence in Gaza is expected to be further reinforced, including the re-opening of its consulate there.

While reconciliation might still face several obstacles related to the conflicting points between the two Palestinian groups, Egypt is “using soft diplomacy” according to Rigib.

Moreover, according to Abu Samra, it has envisioned how reconciliation steps on the ground should be like when it comes to the different security bodies and the arms of Hamas’ military wing.

The situation in Gaza  and international crackdown leave little space for Hamas to be stubborn about continuing as it is. So far, it has committed to what the Egyptian General Intelligence asked.

Rigib and Abu Samra agreed on Hamas’ failure to handle the burden of a country.

“It was that, not that Hamas suffered financially,” Rigib argued. “Moreover, the current strategies of Egypt and the new Trump administration aim at having no role for political Islam. Even though Hamas wouldn’t completely dissociate itself from the Muslim Brotherhood, it would at least take step back.”

Hamas removed reference to the Muslim Brotherhood in its new declaration of May, as opposed to the older version which stated they were the military wing of the brotherhood in Palestine.

According to Abu Samra, Egypt made it clear to Hamas that abiding by reconciliation plans would be the only way to remain, be removed from terrorist organisations lists. Not only so, but it would also mean for Hamas to share political power in both the Gaza Strip and the West Bank. “Hamas realises that losing Egypt would mean losing all”.

Hamas leader Yehia Sinwar said in recent statements that the group will never go back to the internal division under any circumstances. Hamas has already dissolved its administrative bureau and allowed the PA into Gaza. Meanwhile, Abbas has insisted on the disarmament of Hamas.

Yet, one major step of the reconciliation’s implementation would directly impact Abbas: elections. Abu Samra even argued that Fatah was compelled to agree to reconciliation following Hamas’ unexpected compliance.

This comes amid an ongoing Fatah-Hamas reconciliation but a Fatah-Fatah dispute. Abbas’ bitter rival Mohamed Dahlan is partnering up with Hamas.

Rigib fears Abbas would stall the reconciliation process to remain in power as they put other names on the table as potential candidates. Although imprisoned, Marwan Al-Barghouti remains highly popular. Dahlan is also in the picture.

Meanwhile, Abdel Qader Yassin, Palestinian activist, historian and writer doesn’t share an optimistic opinion on the success of the reconciliation. He pointed out to what he described as “serious threats,” saying the Fatah and Hamas have opposing programs especially on armed resistance.

What he fears is more bloodshed between disputed factions, lack of internal democracy and political vision, and if having to sit with Israel as weaker link.

“We must bear in mind that national reconciliation could be a step to but is not national unity,” he said. “I think that people siting on reconciliation table shouldn’t have double standards or conflicting positions.”

In 2007, Israel imposed a land, air and sea blockade on Gaza. Ten years on, the humanitarian crisis reaches a peak when Abbas decided to stop paying Israeli electricity supply to the Strip.

In June, UN Humanitarian Coordinator in occupied Palestinian territories Robert Piper’s described as “disastrous consequences of a further reduction in electricity-supply to the Gaza Strip on the living conditions of two million Palestinians” that is “likely to  to lead to a total collapse of basic services, including critical functions in the health, water and sanitation sector.”

Moreover, border crossings movement of people and goods are restricted by both Israel and Gaza, which according to a May report of the UNRWA “undermined the living conditions of Palestinians in Gaza.”

Pending issues in Gaza require immediate action within the reconciliation process, Hamas officials have said. According to Spokesperson of the Palestinian Authority Youssef Al-Mahmoud said on Tuesday, they would be subject of discussion in the next Cairo meeting.

In August, 22-year-old Palestinian writer Mohanad Younis took his life. Although reports talked about personal issues with his father, Younis’ death nonetheless sparked debate on the sense of hopelessness to dream or be ambitious taking over in Gaza.

“We are talking about daily attempts of youth suicide, of which at least one succeeds,” said  Abu Samra. “We became a poor and sick society,” he added.

Abu Samra didn’t turn blind eye to the responsibility of Hamas – among others –  towards the crisis: they failed to rule on the grounds, which would have required them to embrace others not to take over everything.

“I witnessed how humanitarian aid was stolen from the people – soda cans donated by other countries being sold to them at the supermarket. Everyday, the government sought new ways everyday to raise taxes, while providing no services in exchange. When you go to a hospital, you are required to bring your medicine and equipment,” he said.

He continued that if reconciliation is postponed this time, the Gaza crisis would blow up in the face of Hamas and the PA even before Egypt and Israel.

The conflict between Palestinian factions extended over time, witnessed bloodshed and a number of reconciliation attempts made by Arab states failed over the past years. The two major parties of the conflict as we know it today are the Islamic Resistance Movement known as Hamas and the Fatah Movement.

The Palestinian Liberation Organization (PLO) was established in 1964, as the first Palestinian embodiment of national movement. But soon, the Muslim Brotherhood organization, which disliked Fatah’s control of the PLO, launched its project of spreading throughout the society and forming a new Islamist generation.

“The rise of the Islamists in Palestine was also facilitated by Israel, which saw an opportunity in weakening the Palestinian authority through the presence of an alternative to the PLO,” said Rigib.

By the end of 1987, the First Intifada took place. In 1988, Hamas issued its first covenant in which it explicitly stated that it was the wing of the Muslim Brotherhood in Palestine.

The struggle between PLO nationalists and political Islamists turned into conflict in the 1990’s.

Hamas rejected the 1993 Oslo Accords and the Palestinian National Authority elections that followed. “It considered all of it an act of betrayal,” said Rigib.

Nearly ten years later, this changed with Hamas running in national elections.  According to Rigib who was working at the time at Al-Aqsa University and conducting research and polls, Fatah didn’t stand much chance in the 2006 elections.

“It’s been 11 years of bad governance, people wanted to try Hamas instead. In fact, we advised 2005 president-elect Mahmoud Abbas against holding the elections, but he insisted under the pretext of US pressure to include Hamas,” Rigib said. This meant the participation of a group that wasn’t part of the PLO and risk of further bloodshed.

“Hamas was led straight to triumph,” he commented, which he believes was the result of plotting by the US, Israel and even Qatar.

Yet, the US, Israel and the EU didn’t recognize the Hamas government.

Yassin highlighted the then turning point which resulted in separation between the West Bank and Gaza. “First, Fatah’s security bodies ensured Hamas wouldn’t be empowered in the Gaza strip. They wouldn’t allow [Hamas leader] Ismail Haniyeh to pass in a street where a Fatah security officer was present,” Yassin stated.

Bloodshed shortly followed a failed reconciliation attempt in 2007 known as the Mecca Agreement. “I think it was all a strategy sponsored by Israel from the beginning to have the two powers separated. The Israelis then had a strong reason to halt negotiations, which was the absence of a negotiation party,” Yassin argued.

As so, a series of reconciliation attempts including talks in 2009 in Cairo and 2010 in Damascus,  a 2011 Cairo agreement and 2012 Doha agreement didn’t succeed in ending years of division. In the meantime, Gaza was coming under a looming blockade and painful war.

Trump’s statement in accordance with concerns towards Tehran’s policies: Egypt