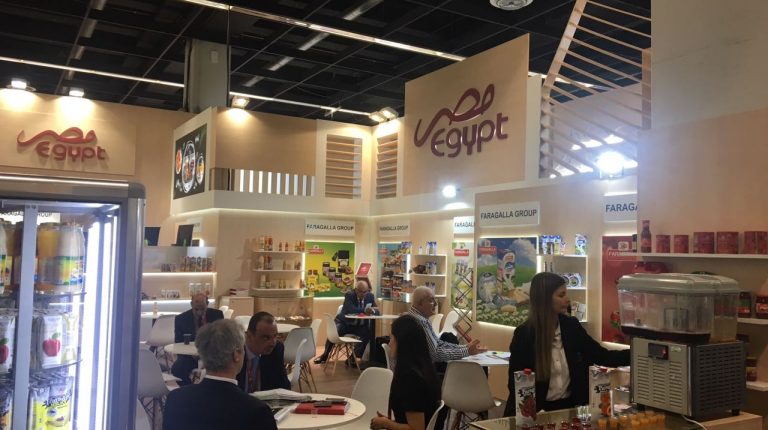 Germany – Egyptian companies succeeded in participating in the international food industry exhibition in Germany, invading new markets during the exhibition, such as those of Latin America and Russia, as well as European Union (EU) countries. The companies also competed with Turkish and Arab products.

“Our prices after the flotation have become very competitive, which makes us succeed in withdrawing shares from other markets, especially Turkey, especially in frozen food and pasta,” says Manar Nasr, executive director of the Food Export Council (FEC), which was present at the exhibition with companies to meet their needs and provide any information about any of the targeted markets.

According to figures from the FEC, food exports to Europe increased by 21% to record $235m, so that the EU accounted for 12.5% of the total food industry during the first eight months of 2017. Germany is the first recipient of $45m in Egyptian food exports.

At the same time, exports to Arab countries accounted for 70%, and “this led companies to open new markets.”

At the request of Egyptian exhibitors, the FEC asked the German Exhibitions Authority to think about holding the exhibition on an annual basis for the success of the companies.

The Anuga food fair is held every two years, alternately with the SIAL exhibition in Paris.

One of the reasons for the success of the exhibition, according to one of the exhibitors, was the work done by the German Trade Representation Office in a detailed study on the market of food products, herbs, requirements of supply, customs treatment, main importers, and supermarkets in Germany, which facilitated the task and helped complete successful deals, according to the exhibition. It pointed out that the Office of Trade Representation succeeded in agreeing with some companies and entities in Germany to open new markets for export.

Seif Sadek, vice chairperson of the FEC and CEO of Agro Corp., one of the exhibitors at Anuga, said that this exhibition is an important forum with specialised exporters not only in Germany and Europe, but also in the whole world, pointing out that it aims to increase 40%. During the fiscal year (FY) 2017/2018 and “our presence in the exhibition and contracts expected to help achieve the goal.”

The exhibition was attended by a number of large and small companies for the first time, including Juhayna, which has not participated in the exhibition for several years. However, according to Seif Thabet, CEO of Juhayna, it returned to participate in the exhibition in order to increase its share of exports, especially after the low demand in the Egyptian market.

One of the companies participating in the exhibition is Abo Taleb, it is a company operating in the field of herbs. According to Sarah Abo Taleb, the company’s export manager, the company succeeded in conducting serious negotiations with many others in the European market.

Small businesses “after 4 years on the waiting list,” according to  the business development manager, Walaa Al-Qayseri, was able to participate in the exhibition for the first time after the decision of the Minister of Industry to give a share to small companies. “I continued to say that exhibitions are not the best way to sell, but after our participation in Anuga, I discovered that the exhibition provides us with the first class and not the second or third class,” she said.

Despite the competitiveness of Egyptian producers at the Anuga exhibition, Yomna El-Sheridy, CEO of the International Company for the Special Food Industry and the president of the Egyptian Women’s Association, believes there are some problems that limit the competitiveness of the Egyptian product, namely the increase in prices of raw materials or local services due to monopoly. Some companies have random pricing on the other hand. “Every week the price of plastic bags goes up without reason,” says El-Sheridy, criticising price instability, which reduces product competitiveness in some cases and carries the burden of rising prices if uncalculated on the other hand.

Hence, Al-Sheridy demanded that the name of the factory should be re-written in the certificate of origin to control the companies and limit the random export.

According to Amr Nour El Din, CEO of Nubaria Gardens. He stressed that the control of local companies in the prices of some ingredients and raw materials, which recorded an increase of more than 100% in some cases, limits the competitiveness of the Egyptian product with countries such as Turkey and Morocco.