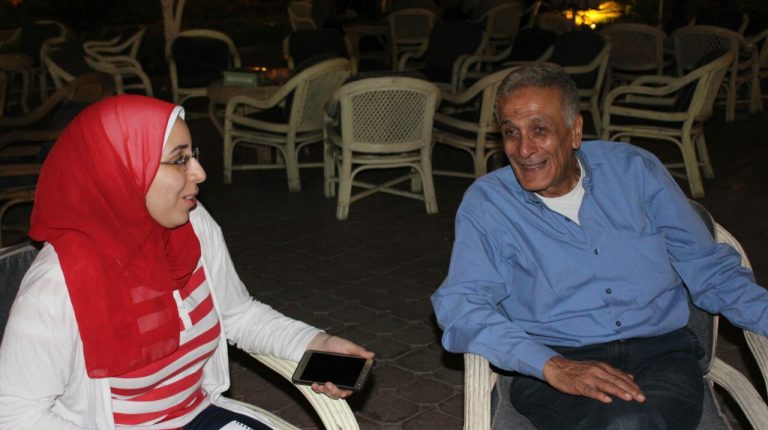 Forty-four years passed since the Egyptian army defeated the Israeli army, reclaimed Sinai, and put an end to the myth of the invincible army.

Meanwhile, there are still a lot of war secrets we do not know, and each year the Egyptian and Israeli sides bring out of their coffers new ones.

Describe for us the status of the military after the 1967 setback?

The military was disappointed and wanted to take revenge. When we were crossing the Suez Canal, we were looking forward to victory or martyrdom.

When did preparations for the October War begin?

It began after the 1967 War defeat. During these six years, the Egyptian army trained viciously.

Tell us in depth your role in the war.

I was a captain and a company commander of shock troops.

We crossed by amphibious vehicles, and we occupied Kabrit base, which was one of the most important bases for the Israelis during the war; moreover, it was a strong fortified base.

We attacked it. Many battles ensued, where many soldiers of our side were martyred or injured until we finally managed to occupy the base.

At that time, Colonel Ibrahim Abdel Tawwab was the battalion commander.

Did you have any prior knowledge of when the war would break out?

No, but as an officer, I felt that the war would break out soon, as any war in is preceded with many preparations or actions. No one would understand these preparations unless he is an officer.

Why did the military choose 6 October as the day of the war?

6 October 1973 was “Yom Kippur”, a Jewish holiday, so the Israelis would not think about war, as working on this day is forbidden. So the timing 2pm shocked them, because it is known that any war begins at dusk or dawn.

Meanwhile, 6 October 1973 was the 10th of Ramadan, so the moonlight was almost at its strongest, since it was almost a full moon.

Destroying the Bar Lev Line was an impressive feat. Could you tell us where the military got this idea from?

A reserved first lieutenant was the one who suggested the idea of destroying the line by using water pumps. We then began studying this idea and made many trials in other places far from the line.

I have read before in an Israeli website that the Egyptian military was playing football on the Suez Canal to mislead the Israelis that the Egyptians are not ready for war. Could you shed light on that?

Former President Anwar Al-Sadat published in the national newspaper that a large number of military officers are going to do the minor pilgrimage to Mecca.

Moreover, some troops went to the Suez Canal and played football there.

Those on the battlefront (before and during the war) also spoke in Nubian, even when they spoke on the walkie talkie—so that if the Israelis were trying to monitor or spy on the conversations, they would be unable to decipher what was being said.

What are some unforgettable memories from the war?

There were many Egyptian military shelters or bunkers in west Sinai. When I moved to the west with a soldier to bring food to the rest of the battalion from the Egyptian farmers, who were always willing to give us food. We found an empty shelter, so we decided to enter. Inside, we found many boxes of food. Moreover, we found on a table a small copy of the Holy Qur’an, which I have until now.

One of the lovely memories also is Ahmed el Badawy’s visit to us in Kabrit when he knew we depend on farmers for food. He visited us and provided us with all the logistics.

The best memory, of course, is the moment of victory.

What was the most difficult moment in the war?

The moment when a brother, a colleague of ours was martyred. I can’t express my feelings. It is indescribable, a mix between being happy for his martyrdom and being sad I would never see him again.

Al-Sadat’s assassination was in the 8th celebration of the October War. How do you see this scene?

The Muslim Brotherhood liked to harass Egyptians on important national holidays or dates. Meanwhile, the October War victory is a great achievement to Egypt, so they decided to assassinate the president—it is their norm. Moreover, this reflects their hater for Egypt.

What do you think of the current political situation in Egypt, especially that of Sinai?

Egypt is now on the right track. Meanwhile, Egypt is making many purging operations to rid itself of terrorists.

One of the greatest achievements is that the Egyptian army in general and the shock troops in specific have declared their  complete control over the area of Al-Halal Mountain after purging all the caves and arrested many terrorists.