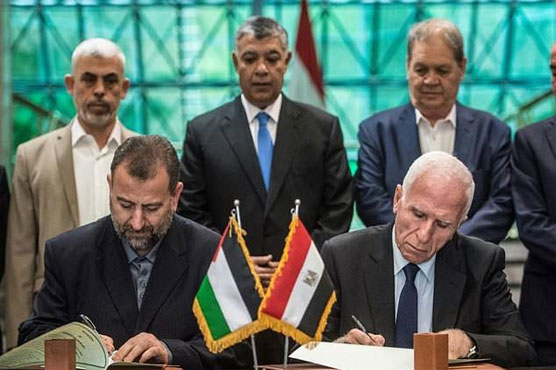 Russia said it welcomed the Palestinian reconciliation agreement brokered by Egypt on Thursday and called on Palestinian factions to implement the necessary steps and accelerate the improvement of the humanitarian situation in the Gaza Strip, TASS reported on Friday.

Fatah and Hamas signed an agreement at the General Intelligence Service headquarters in Cairo and agreed to proceed with further meetings between factions to plan presidential and legislative elections.

Palestinian President Mahmoud Abbas praised Egypt’s efforts in a phone call with President Abdel Fattah Al-Sisi for reaching an agreement on Thursday to end the division. Abbas also briefed Saudi King Salman bin Abdulaziz on the details of the reconciliation agreement, including the ongoing process of enabling the current government of unity in the Gaza Strip.

The agreement further stipulated that the government should be fully enabled to administer the Gaza Strip by 1 December at most.