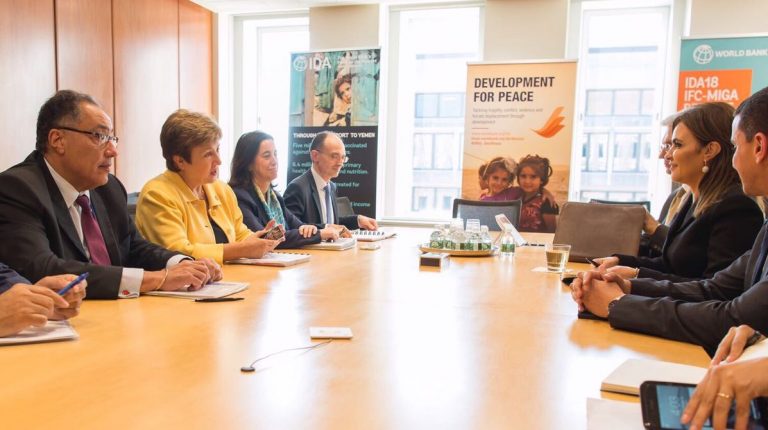 Egyptian Minister of Investment and International Cooperation Sahar Nasr met with a delegation from the World Bank on Tuesday to discuss the final procedures before giving Egypt the final $1bn tranche of a $3bn loan.

According to Nasr, the loan is to finance the social and economic development projects.

The regional director of the International Bank in Egypt, Assad Allam; its vice president of the Middle East and North Africa region, Hafez Ghanem; and Nasr met to follow up on the progress of the development projects in Upper Egypt, according to a press release on Tuesday.

Nasr is in talks to expedite the signing of the World Bank’s third tranche worth $1bn before the end of 2017.

The Egyptian minister has discussed speeding up the signing of the loan with World Bank CEO Kristalina Georgieva as well as supporting infrastructure projects and prioritising the role of women in the bank’s programmes with Egypt.

Georgieva welcomed Nasr’s invitation to attend the upcoming “Business for Africa, Egypt, and the World” conference, which will see the discussions of investments in sustainable development.

The three-day event will be held in Sharm El-Sheikh between 7 and 9 December and will kick off with the Young Entrepreneurs Day (YTD).

Egypt’s portfolio of loans held by the World Bank amounts to $8bn, of which $6bn are for the government and $2bn are for supporting the private sector.

The loans are part of an agreement between Egypt and the World Bank and cover the period between 2015 and 2019.

The World Bank has allocated $500m to the Upper Egypt development project.

She added that the ministry is calling on the private sector to participate in infrastructure projects in Upper Egypt.

Earlier in September, Egypt received the first tranche of the loan. The second one was obtained later in March. Both were worth $2bn.

The World Bank mission has been in Egypt in September to discuss Upper Egypt development project, supporting governance, developing education, and enhancing the investment climate.

Nasr highlighted incentives for investors to attract foreign investors, such as the 30-50% tax exemption from investment costs for seven years and one of the big reasons for a surge in business registrations.

“Just in the last three months, July, August, September, 3,700 new companies were established … this is 25 percent more than the same period last year,” she said, citing the new law.