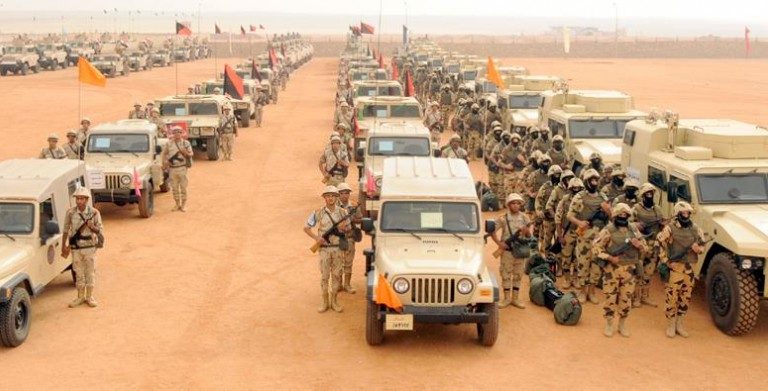 The General Prosecution started on Tuesday investigating the violent incident that took place in North Sinai on Monday, including the heist on the National Bank of Egypt and the attack on a security post, according to state media.

Authorities from the prosecution will investigate the crime scene, and requested the police reports of the National Security apparatus.

President Abdel Fattah Al-Sisi asserted on Tuesday with the head of the World Jewish Congress, Ronald Lauder, that the world has to take a firm stance against extremism and militancy.

Hours after the attack, Al-Sisi held a meeting with Prime Minister Sherif Ismail, as well as with the ministers of interior, defence, foreign affairs, health, justice, as well as the head of the General Intelligence Service department.

During the meeting, the president was briefed on the situation in counter-terrorism operations in Sinai, and the security plan to maintain order in the peninsula.

Al-Sisi praised the efforts of members of the army and police in countering militant groups.

At least five people were killed Monday in a staged militant heist on the National Bank of Egypt (NBE) branch in Al-Arish. The Ministry of Interior said three policemen, the bank’s security guard, and a woman were killed, and others were injured when gunmen opened fire and used improvised explosive devices (IEDs).

Staging a heist is a new strategy executed by militant groups.

Security forces were able to defuse more bombs in the area surrounding the bank. The NBE issued a statement confirming the killing of a security guard and policemen, in addition to the robbing the bank’s main vault.

On Sunday afternoon, the Karam Al-Qawadis checkpoint was attacked by militants believed to be members of the extremist group Sinai Province. The Army Spokesperson said in a statement on Sunday that six army personnel were killed in a “failed attempt to ambush the checkpoint.” He added that 24 militants were killed in actions, while another one was injured. The identities of the killed perpetrators were not revealed.

The US Embassy in Cairo said that it “deplores the recent terrorist attacks in the Sinai Peninsula and elsewhere in Egypt,” adding that such “attacks once again demonstrate the depravity of the terrorists. The embassy expressed its deep sympathies and condolences for the victims affirming it stands with the Egyptian government and people as they battle terrorism.

Also the Democratic Front for the Liberation of Palestine condemned the attacks describing it as an attempt to affect the leading role of Egypt especially after Egypt’s intervention to broke a peace agreement between Hamas and Fatah last week.

Both the army and police forces have been engaged in violent clashed with the group Sinai Province since 2013.

“Sinai Province”, a group previously known as Ansar Beit Al-Maqdis swore alliance to IS in 2014, and has launched deadly attacks on army and police checkpoints.

Over the last two years, the Egyptian armed forces have launched counter attacks against the militants’ stationing points across the Sinai Peninsula, where the group is based in the cities of Sheikh Zuweid, Rafah, and Al-Arish.

A state of emergency was first declared in North Sinai by interim president Adly Mansour, who came into power following ousted president Mohamed Morsi. It has been extended following this year’s extremist attacks on Coptic churches on Palm Sunday.

Egypt participates in the CISMEF