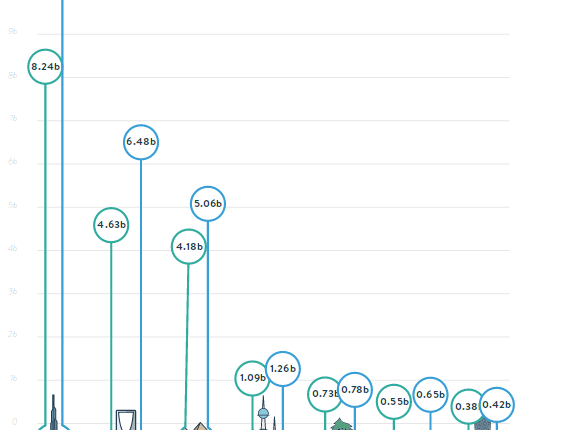 The report highlighted the analysis of the electronic payment operations as well as the expected developments in the seven main Arab countries in the field. The report revealed that the region witnessed a total growth of 22% in the electronic payment operations in 2016 thanks to the growth led by Saudi Arabia by 27%, Egypt by 22%, and Emirates by 21%. According to the report, the conferences, fairs, entertainment, concerts and promotional activities came as the most growing sectors in electronic payments, where growth reached 33% in 2016, compared to the year before.

The growth of the Egyptian market is supported by online bookings, where payments of the sector locally reached $2.18bn, and the electronic commerce sector reached $1.8bn, where buyers through internet reached 17.7 million people.

The report revealed that the total value of services and goods bought electronically in the aforementioned seven Arab countries in the field reached $30.4bn in 2016 compared to $24.9bn in 2015, with 22%. Emirates came on top of the list of countries in terms of the cash value of the items purchased online, as well as the rate of electronic payment growth, with $12.4bn total and an annual increase of 21%. On the other hand, Saudi Arabia recorded $8.3bn with 27% annual increase, and Egypt recorded $6.2bn with annual increase of 22%.

According to the report, Saudi Arabia was the fastest growing in terms of e-payments across the airline and travel services sector, where annual growth reached 21% year-on-year (y-o-y), and 36% in the field of travel and tourism.

The report said that Egypt topped the list of the countries in the region in terms of growth rates in e-shopping, where electronic payment operations growth reached 32% in the field. Emirates was classified the fastest growing in e-payment in the sector of entertainment, conferences, and concerts with 36% growth.

More than 50% of those who resort to pay in cash and were surveyed in the report said that they would only pay online if they were sure about the safety of the payment method.

The report expects the electronic payments market in Egypt to grow to $14.04bn by 2020, occupying the third place after the Saudi market in the second place with $22.13bn, and Emirates in the first place with a market volume of $27.13bn by 2020.

Vapulus aims to attract $3m of investment in 6 months