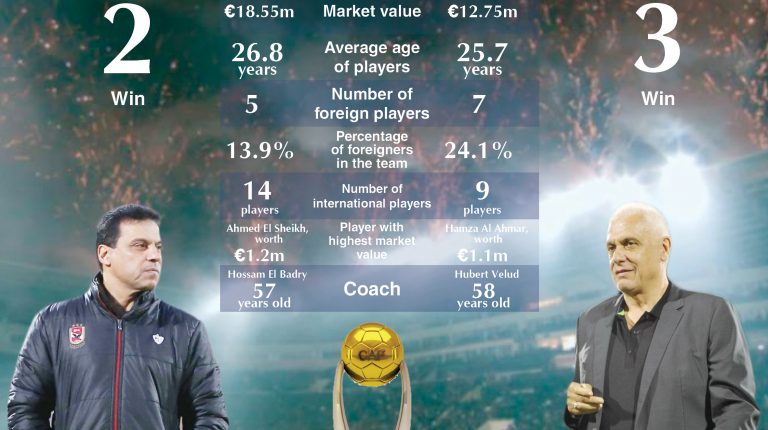 Borg El-Arab Stadium will be witnessing today a battle between Egyptian Al-Ahly team and their Tunisian guests, Al Negm Al Sahili, in the semi final home match. This is similar to Al-Ahly’s tough away match against Al Negm Al Sahili.

The technical management of Al Ahly in today’s match is led by Hossam El Badry, who is 57 years old, while Al Negm Al Sahili’s coach, Hubert Velud, is 58 years old.

According to FIFA’s website, the results of the games played by Al-Ahly were three wins, and two draws in the African Champions League. Oddly, this is similar to Al Negm Al Sahili’s results, which makes the upcoming battle a rather equal one. Al Negm Al Sahili won its home match by two goals against one; however, the goal scored by Al-Ahly outside its field can resolve the matter to be in favour of Al-Ahly in the case of a 1-0 win.

“The final scenario in 2007 is still present in minds, where the two teams witnessed a draw in Tunisia, before Al Negm Al Sahili won in its away match in Cairo 3-1, gaining its last title in the championship,” FIFA continued.

Al Negm Al Sahili only needs a draw in the Borg El-Arab match to qualify for the finals of the African Champions League after its win in the away match three weeks ago 2-1.

Looking back at the history of games between the two teams, they met in 12 matches, with seven of them being draws, and two of them won by Al-Ahly while three of them were won by Al Negm Al Sahili.