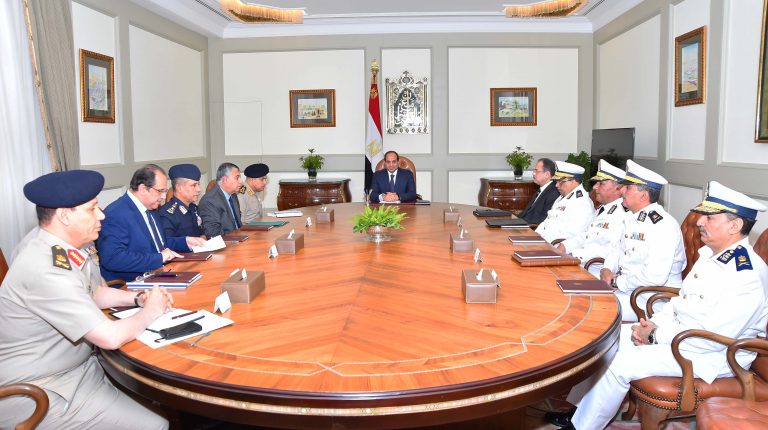 President Abdel Fattah Al-Sisi heard on Sunday reports of the shoot-out that took place on Friday between police forces and terrorist militants in a meeting with Minister of Interior Magdy Abdel Ghaffar, Head of the General Intelligence Khaled Fawzy and other security officials from the ministries interior and defence.

The president mourned police victims and offered condolences to their families, asserting that the efforts of those who sacrificed their lives for their country will not be in vain, a presidential statement read.

Praising the Armed Forces and the police, Al-Sisi said they successfully tightened their grip on terrorist groups and restored the country’s stability, insisting that terrorism should not be allowed to bring down the Egyptian people.

The statement is the first to be issued concerning the issue. On Saturday, presidential content covered Al-Sisi’s commemoration the 75th anniversary of Alamein Battle and his meeting with India’s Minister of State for External Affairs.

Foreign states, local and international institutions continued to express solidarity with Egypt in its war on terrorism, condemning the militant shoot-out which killed at least 16 policemen on Friday.

The House of Representatives convened on Sunday starting with a moment of silence to honour police victims. Parliament Speaker Ali Abdel Aal said it was important to stand with the police in their quest for victory over terrorists, asking the Legislative Committee to draft a law organizing compensation for the survivors of terrorist attacks among the police and army, state-media reported Sunday.

“I stand before you today in harsh painful circumstances the country has witnessed in the past days. Many policemen sacrificed their valuable lives while facing terrorist attacks by those who have no religion but bloodshed and no vow but betraying this country and killing its people,” said Prime Minister Sherif Ismail in a speech before the parliament.

This comes as the Ministry of Interior called on the media to stick to official narratives. International media outlets had reported a much higher number of casualties while the ministry, in a delayed statement, maintained the death toll of policemen at 16.

The ministry also denounced several audio recordings were circulated on social media, as alleged calls from policemen in action calling for rescue and a recording aired by prominent pro-state TV host Ahmed Moussa.