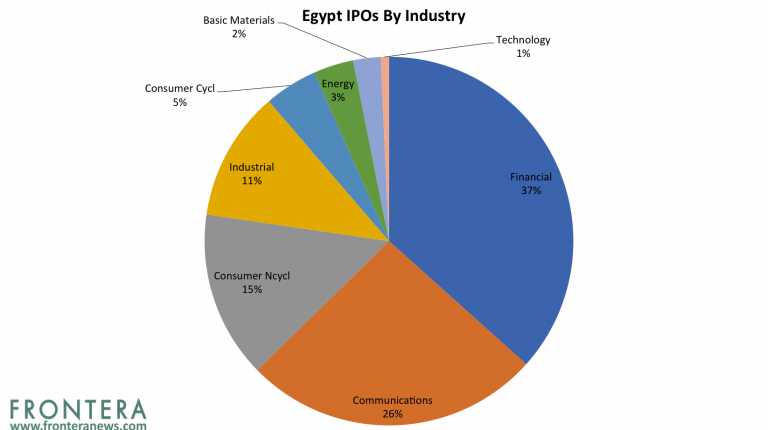 A recent report issued by Frontera Research said that the high interest rate environment is a good factor for the awaited initial public offerings (IPOs) of some state-run companies.

The report noted that the current expensive borrowing cost will make listing attractive for these companies to meet their finance requirements.

The Egyptian government is currently mulling plans to divest stakes in select state-run enterprises as part of broader efforts to revive its battered economy.

Discussions are underway between Egyptian authorities as well as local and international investment banks to advise the government on the sale of stakes in government-owned companies.

Investment and International Cooperation Minister Sahar Nasr said to Bloomberg in an interview that these stake sales would “broaden the ownership” of state companies among Egyptians, bolster local capital markets, and help the government raise revenue”.

The Egyptian government has hired HSBC and EFG-Hermes as advisors on the IPO of state-owned Egyptian bank Banque du Caire.

The last time state-owned companies were listed on the exchange was in 2005 when shares were floated in Telecom Egypt and oil companies Sidi Kerir Petrochemicals and AMOC.

“High borrowing costs make IPOs attractive for companies as they search new avenues for their financing requirements. Furthermore​, a rising equity market also lures these companies to consider public issues of their shares as they can generate attractive valuations on their shares,” the report noted.

Mohsen Adel, vice chairperson of the Egyptian bourse, mentioned that the exchange is planning to attract further investments over the next few years by adding new instruments and moving to a fully digitized quote system.

Currently, there are 270 stocks listed on Egypt’s stock markets and 500,000 investors are registered to trade.

“I expect the listing of three to five new companies in the stock market before the end of this year, between medium and large-sized ones,” Adel said recently, without giving further details. “The procedures for listing one of the state petroleum companies, ENPPI, are being completed within days,” he added.

Since November 2016, Egypt’s central bank has raised interest rates by nearly 7 percentage points as part of its efforts to counter high inflation.

However, this has hampered the financing capability of businesses in the country and has made debt unattractive. As such, companies are turning to the equity markets to raise funds for their projects. “The high interest rates currently could enable us to attract new companies, because financing opportunities on the bourse costs a lot less,” the report added.

Since 2000, only 42 share issues (including rights issues, FPOs, and IPOs) have been announced in Egypt, for an aggregate deal value of $7.9 billion. Of these, 35% of them were by financial firms, while 25% were by the communications sector. Consumer non-cyclicals and industrial constituted 14% and 11% of the IPOs in Egypt over the past five years.