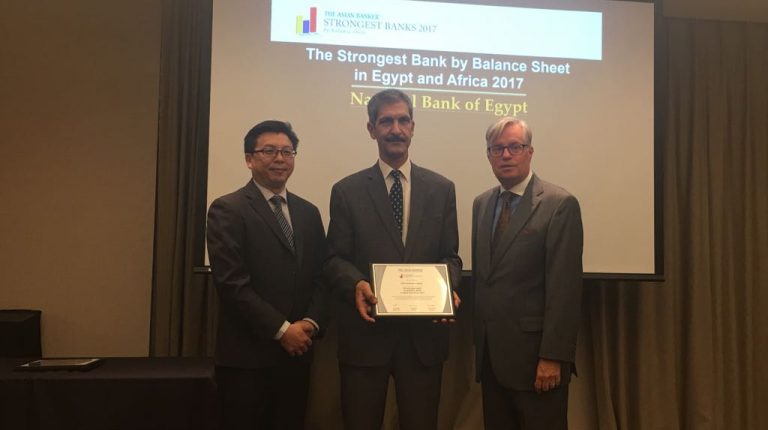 The Asian Banker granted the National Bank of Egypt (NBE) the “Strongest Bank” award in Egypt and Africa of 2017, according to the AB500 Index issued annually by the institution.

The index measures the strength of balance sheets and financial performance indicators of commercial banks in mature markets and promising emerging markets to identify the 500 most powerful banks in Asia, the Pacific, the Middle East, and Africa.

According to Hesham Okasha, chairperson of the board of directors of the NBE, the Strongest Bank award given to a bank in Egypt and Africa for 2017 is based on the strength of the budget of the public bank, stressing that this achievement is a direct result of the banking reform policies adopted by the Central Bank of Egypt (CBE) since 2004 .

He added that this classification also comes as a result of the restructuring of the bank’s sectors, which started in 2008, to rely on the scientific method of management, the adoption of the risk classification policy and commitment to corporate governance, the modernisation of technological infrastructure, the use of the best software systems, the development of existing products, and the addition of new products that meet all customer desires and expectations.

According to Okasha, in the fiscal year that ended 30 June 2016, the bank achieved 88% growth in net profits before taxes to reach EGP 19.5bn. The bank posted the highest net profit in the history of the bank to EGP 12.5bn, an increase of 145% over the previous fiscal year.

According to Okasha, the results of the bank for the fiscal year that ended 30 June 30 2017, which are expected to be adopted, have achieved significant growth. The bank’s total financial position reached EGP 13.65bn, a growth of 94% over the previous year and a market share of 31%.

Its financial viability and its market competitiveness revealed that the bank’s accumulated reserves and retained earnings were used to increase capital, which led to an increase in equity to reach more than EGP 86bn on 30 June 2017, a growth rate of 123% compared to the end of the previous fiscal year.