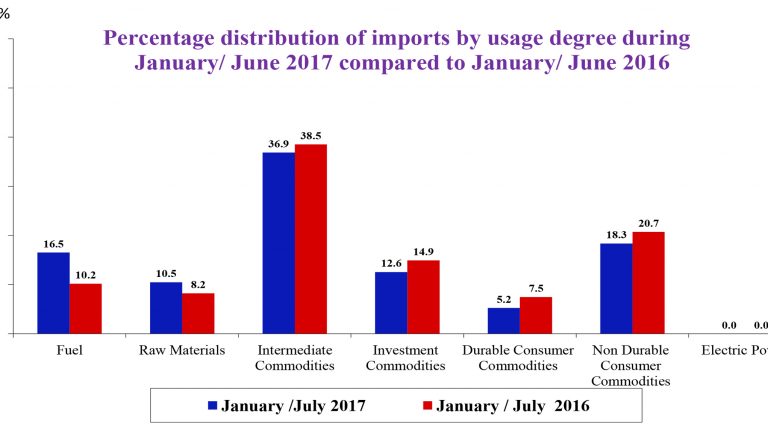 The deficit in the trade balance during the first seven months of this year amounted to about $21.3bn, down from $28.7bn in January to July 2016, according to the Central Agency for Public Mobilization and Statistics (CAPMAS).

In a report obtained by Daily News Egypt, the agency said that the total value of Egyptian exports increased during the first seven months of 2017 to $14.8bn, versus $12.5bn in the same period last year.

Industry supplies, fuel, and capital goods came at the top of the goods imported by Egypt during the first seven months of 2017, where industrial supplies worth $12.112bn were imported in this period, next to $4.96bn of imported fuel and oils, as well as capital goods, excluding transport, worth $3.714bn.

CAPMAS noted that Egypt’s imports of live cattle and buffalo declined to $38m in the first seven months of the year, down from $81m in the same period last year, while imports of meat dropped to $640.2m, down from $1.1bn.

In the same context, the figures revealed that processed industry supplies, primary food commodities for consumption, fuel, and crude oil were among the top exports from Egypt in the first seven months of the year.

CAPMAS noted that Egypt’s exports of processed industry supplies in that period amounted to $6.105bn, while exports of primary food commodities for consumption reached $1.616bn, while fuel and crude oil exports marked $1.225bn.

Meanwhile, Egypt’s exports of passenger cars during the first seven months of 2017 amounted to $1m only.

Finally, CAPMAS noted that the value of some imports increased in July this year compared to the same month last year, such as petroleum products (1.2%), plastics in primary form (15.7%), pharmaceuticals and pharmaceutical preparations (20.7%), and pipes and their supplies of iron or steel (95.4%).