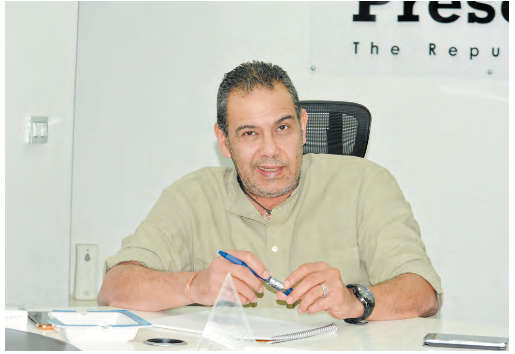 Presentation Sports, the sponsor of the Egyptian national football team, reached an agreement with the Egyptian Television Network to film and produce the Egyptian premier league matches using the company’s own cameras.
The CEO of Presentation Sports Amr Wahby said all the games will be filmed on HD resolution through 12-18 high-quality cameras that were used in filming the Arab Club Championship in Egypt this year.
He spoke about the Egyptian national team’s last World Cup qualifier match against Congo, which could eliminate the Pharaohs’ dream to qualify for the 2018 World Cup in Russia.
Wahby said he was very nervous after Congo scored the equaliser in the last 10 minutes of the match, adding he was afraid of losing the chance to qualify for the World Cup, which would have caused great losses for his company and perhaps destroy its future.
Presentation Sports has won the new sponsorship contract from the Egyptian Football Association for EGP 405m, and the company would have incurred great losses if the national team had failed to qualify for the World Cup.
Commenting on the ongoing investigation over the broadcast rights contract of the World Cup that was sold to beIN SPORTS, managed by Qatari Nasser Al-Khelaifi, Wahby said that beIN SPORTS has never won in any real and legal tender.
He accused beIN SPORTS that it did not compete for the broadcast rights, and it was granted the contract by FIFA. Wahby added that his company submitted an application worth $1.2bn for broadcasting the Confederation of African Football’s tournaments, while beIN SPORTS’ offer was only $1bn. However, beIN won the tender.
Wahby also accused the Qatari channel of paying bribes to win the tender. He pointed out that beIN SPORTS faces legal cases of bribery in the Egyptian, Swiss and French judiciaries. He continued that his company will spare no effort to allow the Egyptians to watch the World Cup matches.

Regarding the company’s ability to compete Qatar’s beIN network, Wahby said he seeks to provide excellent service to the Egyptians, stressing that Presentation Sports managed to broadcast Chelsea FC games in all competitions free of charge, including English Premier League, the UEFA Champions League, and the local cup.

On the other hand, Presentation said it has allocated an open budget for the team’s preparations for the 2018 World Cup in Russia.

Wahby said his company spent about EGP 25m in the World Cup qualifiers, in addition to the sum agreed upon in the previous contract with the Egyptian Football Association.

The company offered additional financial awards to the players to maintain their outstanding performance. Wahby revealed that the company will charter a private jet to fly the Egyptian players to Ghana, where they will face the Black Stars on 10 November in the last match of the World Cup qualifiers.
He pointed out that a lot of sponsorship offers were submitted once the team officially qualified to the World Cup finalists, adding that negotiations are underway with major Egyptian and international companies to sponsor the team in Russia.