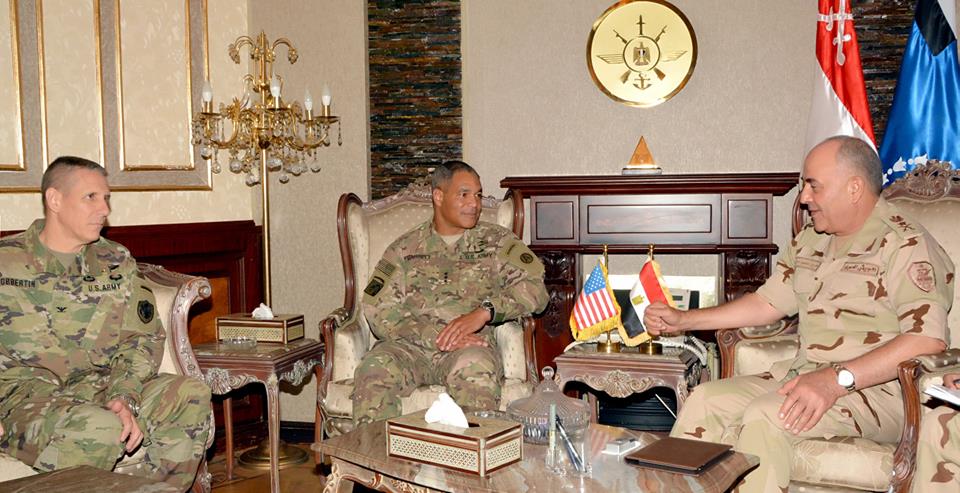 During his three years of work as the Chief of Staff, Mahmoud Hegazy held a large number of meetings with foreign counterparts and senior military officials from all over the world, discussing cooperation, fighting terrorism as well as regional crises.

His most recent visit was to Washington DC where he participated in a two-day Joints Chief of Staff conference on anti-terrorism. Nearly a week earlier, Hegazy had also met with US Army Central Commander Michael Garrett. He and Garrett also discussed in July military cooperation and joint efforts to fight terrorism.

The US moved to cut down military aid to Egypt estimated at $195m while President Donald Trump has talked about reconsidering.

This came after Hegazy received Commander for US Africa Command Thomas Waldhauser and the US Ambassador to Libya Peter Bodde during their visit to Egypt in July. Hegazy held several meetings amid efforts related to Libyan reconciliation and met several delegations.

Meanwhile, Egypt conducted several military drills on soil and abroad including “Faisal 11” with Saudi Arabia, as well as drills with Bahrain, Russia, the UAE and Kuwait.

In August, Hegazy attended the “Medusa 2017” aero-nautical exercise held in the Mediterranean Sea with the Egyptian navy. Hegazy and his Greek counterpart Evangelos Apostolakis had also attended together the “Medusa 2016” drill last December.

In August, Hegazy was in an official visit to Japan where he held talks with the Japanese minister of defence and senior commanders. Then, Hegazy received Minister of Defence Tomohiro Yamamoto in Cairo in the same month.

Over the past three years, Hegazy engaged in bilateral talks with many countries including the UK, South Korea, Germany, Italy, France, the NATO and the EU among others.

Egypt has been purchasing from different sources but France remains the main seller, including two Mistral warships, 24 Rafale Fighter jets that Egypt purchased in 2015 and four Gowind corvettes in 2017.